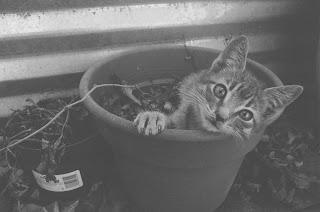 Lately, I have been hanging out with my kitten a lot lately. That may sound pathetic, but I am ok with it. It has finally gotten colder here, actully upon our return from Indiana, we heard rumor it had snowed that morning. It was probably upper 30’s on Saturday after Thanksgiving (in Austin!) and rainy. Gloomy, but lovely! Feels like winter. Almost. Derick and I had a WONDERFUL trip back to Indiana for Thanksgiving, we stayed at my parents place in the country the majority of the time. I pushed and pulled him to do the Tuxbro’s race the Drumstick Dash on Thanksgiving morning. Tuxbro (Tuxedo Brothers, local race organization in Indy) puts on excellent events, the owner Don Carr just loves it and it shows. It was a 4.5 mile race in Broadripple, near Indianapolis. And even there it was cold and nasty, but perfect race weather….about 35 and misty. I had done a 26:05 last year for 2nd place, so this year I wanted to better it and well, of course, win too. 🙂 We saw some chick with a Duke shirt on prior, so I knew she’d be fast. Skinny runner type. I need to learn to pace myself, so Derick said ‘Go out with her.’ I thought he meant ‘go out w/ the lead woman and stay with her’, so of course being all controlled, I went out in about a 5:25 mile. Idiot. But, I did ‘feel controlled’. Duke was nowhere to be seen. Until the mile 2 mark, when she so swiftly cruised by me. That’s ok, I have more left, too. hehe. I felt very strong until the mile 4 mark when some other little girl (looked about 15) ran past me. What the HELL? Who was she? Ah whatever, I finally saw the clock and I was approaching 25:30! Wa Hoo! I finished 3rd and about 30 seconds faster and on the same course! Good for a 5:41 average pace. I’ll take it! Derick had a great run as well, 4th or 5th overall but he has been running so little compared to last year, he was happy with it. Best part was, my dad and Breana (my step-niece?) came out to watch! I think that this stuff is so good for Breana to see. Bad part was, they were watching the 2.9 mile option finish…so, they missed us. I came up yelling his name after we finished! Ah well, fun had by all.

Outside of that race, it was a lot of relaxing, fishing and eating. I actually caught 3 fish in Lake Barbara (my parents’ pond) in 40-degree weather on Wednesday. We all went to a place called the Story Inn on Friday for breakfast, out in Story, Indiana. Check it out!! Such a cool place and supposedly haunted! It was about 45 degrees in there but I guess that added to the victorian, rustic feeling eh?
Anyhoo all else is good, I am thoroughly enjoying the ‘break’ from training, doing a lot of yoga, pilates, and easy running and such. Rode outside for 1.5 hours yesterday, very hilly Austin route and seriously almost got off and pushed the bike a few times. I am so glad I was alone so noone had to see my pathetic self struggling up these hills! It was pretty humorous, actually. I have tentatively decided to train for a marathon. We’ll see if that happens, esp. when the training ‘begins’ next week. It’d be something new, and early enough in 2008 that I could still put in a big cycling block afterwards and have a decent tri season too.
That is about it here…I need some new pictures, dad, will you send me some from when I was home? 🙂 Hope everyone is doing well and enoying this time of year. I love it, football games (well, some are coming to an end…), colder weather, shorter days, taco soup, thinking about Christmas gifts, and yoga. And enjoying some good winter beers, too. It’s all the little things.

2 replies on “Down Time with Shackleton”

great writtings,kelly! even tho i am a little prejudiced, i do love reading your “musings.” i should know you well and yet you always surprise me with something or other among your “scattered thought.” that’s a pretty approprite name for someone i used to consider scatter “brained.” ok-enuf of that. thanks for keeping even old mom and dad informed!babs