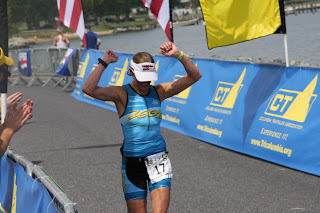 Well I just returned from Cambridge, Maryland yesterday to what feels like almost ‘comfortable’ weather conditions by comparison. Who would imagine in Maryland it could be so hot and humid? I guess it is just so far NORTH of Austin, I’d thought it just couldnt’ be that hot…boy was I proven wrong! I have a full story about the weekend on my website, but I’ll give a quick run-down of the weekend and how the race panned out.

I only opted to do this race about 3-4 weeks ago, as I was not sure if I was really ‘ready’ to do a half-ironman quite yet. But I figured, go out, see where I am at and take it from there. Plus, financially it was feasible as the Baltimore airport is pretty reasonable to fly into. So, I talked my parents in to meeting me there (my dad has a cousin in Annapolis, MD who we stayed with) and we were off.

The race was on Sunday (June 8th) and we all arrived on Thursday evening, with plenty of time to get situated and get in to Cambridge on Friday. I felt very relaxed the whole time, which I believe was in part due to the fact that I had had some big ’emotional’ things going on the week prior which somewhat wore me out…however, that being said I somehow found the ‘right place’ in my mindset, and I think this allowed me to say, “Enjoy the weekend with the family, stay relaxed and just go out and race.” I try to simplify things as much as possible especially if it is a bigger race, as to alleviate nerves.

Sunday AM we awoke to mid/upper 70’s and what felt like 90% humidity…seeing that we were in the swamp lands, it probably was 90% humidity. The gun went off promptly at 6:45 and we were off, making our way through the Choptank River. Swim was uneventful, though I had to work my way through a few people at the start, I found VERY clear water for the bulk of this swim and was really in my own little world as there was noone near me for most of it. Unfortunately 2 women (Dede Griesbauer and Joanna Zeiger) had taken off, and had 1-2 minutes on me when I exited…my dad told me ‘3rd woman’ in transition, a bit disappointing but hey, what can you do but keep on going. That is what I told myself, I could not get ‘too comfortable’.

I was off on my new Scott Contessa. The bike was oddly enough a rather quick 56-mile ride for me today, not in that I was FAST but moreso that it just did not feel long…I am often times SO anxious to be off the bike by about mile 40, but today I just kept chugging along, never to be passed by ANY WOMEN…a FIRST for me! I down my whole gel flask (which had 5 gels in it, about 550 calories and 1000 mg Sodium) with no problem and even had to go pee on the run. So, I guess you could say that I really nailed my nutrition.

Upon bike exit, I found I was still in third…sweet! Though the conditions were extremely tough by now and I knew the run would not be easy, I also knew that this is a strength so use it for all it’s worth. I took off with my green Zoot shoes (matching my new green Zoot racing outfit), J&A’s visor, and my stock of gels to hear the announcer say, “There goes Kim Loeffler! She is looking smooth and comfortable…” Whatever. I just laughed to myself.

Without a doubt this was mentally one of the toughest 13.1 miles I have ever run. I started off very conservatively, knowing that going too hard could result in a DNF. I went through a few ‘waves’ of feeling good/bad, one of the ‘goods’ being between miles 4-6 before the run turnaround. I think the vast amounts of ice I was dumping down my suit helped a lot, as well as the water-stocked aid stations. I also took 4 gels on this run, knowing I needed the sodium and simply the calories (again…never felt bloated or really hungry!). From miles 7-10, I struggled…I honestly thought my pace was down to about 8-min/mile, but I kept plugging along as I was being told I was closing in on 2nd place. The thing about a day like today was that, you just could NOT push harder…I knew that if I got greedy and tried to do that, I could risk having to drop out…or I could stay WITHIN MYSELF, strong but controlled and hang on to 3rd. With $3000 up for 3rd, I opted for strong and steady. It paid off as I finally saw the yellow flags about 1/2 mile ahead lining the finish chute.

All I can say is, it felt damn good to finish knowing I had securely gotten 3rd (and come close to 2nd!). My parents were there, along with a few friends as well and the announcer finally knew my name by the time I finished (I knew he would!). Thank you to my sponsors (Team Zoot, Scott, Spyder Optics, Advanced Rehabilitation, Jack and Adams) and of course my parents for making the trip to support me…as well as my fiance Derick who was in South Carolina with his family, racing as well, for all of his constant support and guidance. As I alluded to in the beginning, I approached this race a bit unsure of what to expect, but I think that having gone through some ‘life things’ the week prior helped me straighten a lot out and I was able to somehow find great clarity in my purpose here at this race. I felt strong, and I felt like I belonged among the top 3. (I will post pics as soon as I receive them! Um…anyone have any pictures from the event?)

P.S. Check out a short mention of the race as written in Inside Triathlon!

6 replies on “Eagleman 70.3…A Little Breakthrough”

Amazing race, Kelly! I’m so proud of you! When are you going full time?:)

Well…I see you raised your arms at the finish but where’s your face and smile? Great race!
-acm

I looked up the results Sunday (or Monday) and was excited to see how well you did. Kick bootay runner of course! Cha Ching $$$$$$ 🙂

Congrats on a great race, Kelly!! You’re an inspiration!! See you soon!