I arrived Friday, Southwest Airlines on a direct flight. I even snuck by with only a $25 bike fee; FYI, Southwest is the way to go with bikes. I built the bike first thing and hit up a nice easy 30 minute run over to Lake Shore Drive, which I was familiar with from last year. It was extremely muggy but I got rained on which felt GREAT! I then hopped on the ‘Brown Line’ (chicago-train-talk) and met my friend Jen at the Expo to get our race bags, which we tried to do quickly. Those Expos can really suck the energy right out of your legs! We hit up a nice little italian place with her boyfriend Zach and were back to her place early. Saturday I took the day off, mostly due to the circumstances. She lives in Lincoln Park, not the best place for riding; so I just slept in, went out to brunch with our friend Noelle and really sat around all day. It was nice but boy did I feel LAZY by the time Saturday night rolled around! Good and ready to race (…kind of…).
This race is unique in a few ways. 1) It is the largest triathlon in the world, I believe, at ~8700 entrants! They start waves at 6:00 AM, but unlike many non-drafting races 2) The pros do not go off until 11:00. This is nice in theory (sleep in, not have to go to bed nervous, do not have to wake up to cram food in at 4:00 AM) but the waiting is AWFUL! I was up at 6:30 automatically, and I just ate breakfast and killed time until I left Jens condo at about 9:15. I am sure that they do this because it allows for more spectators to be out (as most Chicago-ans are probably up and about by 11:00 on Sunday) but I have to say, I definitely favor the 6:30 or 7:00 am start…less time to get nervous, the gun goes off before you actually wake up fully. It’s great.
**NEWS FLASH**: My mom called me on Saturday night at 10:00 estatic about the fish she caught at their lake (pond?) in Southern Indiana…can’t you just HEAR the excitement in that smile??? That fish makes her look miniature…. 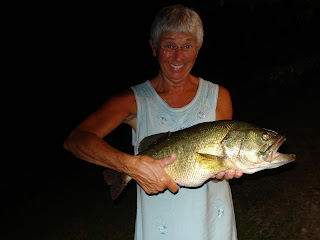 …OK back to the race now… 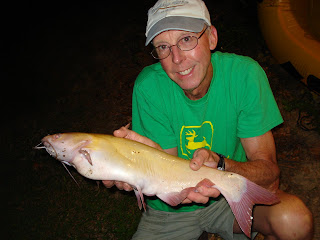 3 replies on “Chicago Triathlon…it’s supposed to be hard…”

I was told about your blog about a year ago through 3 Stories Racing and I’ve been following it ever since. That last paragraph is great! So true and very inspirational! Good luck on Monday!

Was it a delicious bass?

You rocked it! I have to agree that I was even nervous before the race and I wasn’t even competing!
See you Monday. 🙂
LCotter