Today was Jacks Generic Triathlon, put on by none but Jack and Adams (and the entire crew at the shop). It was a fun time out there, as it always is, at the good ol’ Texas Ski Ranch in New Braunfels. Derick and I both went out to this one (and he raced, too!) which is always fun…you see, last year, as I recall, he and I got into a little ‘tiff’ (argument) the night before Jacks Generic. Something stupid, I cannot even remember what, probably me saying “are we ever going to get married?” So once we made up, we decided to go and enjoy an evening ‘out’. We had a nice dinner at Opal Divines (burgers, beer) and then hit up Zak’s (local yellow happenin’ place near our house) for some wine. Little did we realize, we both woke up with headaches the next morning…maybe that contributed to me leaving my helmet at home, and us turning around half-way to New Braunfels to get it. So we contemplated that again this year (tradition! we got a little tipsy last year pre-Jacks, we should again this year!) but over a very lazy Friday night of Bocce Ball and Gueros Tacos for dinner, well, we accomplished this the night BEFORE…so, Saturday night (pre-Jacks) was spent watching a movie at home, eating Austins Pizza. Good pre-race evening if I do say so myself.

We arrived early enough, about 7:00 am (what is there ‘really’ do do before the start anyway?) and were ready for the 8 am start. Gun was off and so were we, splashing our way through the little Texas Ski Ranch pond. I found Andrea Fisher’s feet and stuck to them for most of this swim, which was pretty pleasant; clear water, no fighting, my kind of swim. We exited 1-2 and were off on the bikes, whereby Andrea quickly passed me a couple of miles in. This always kind of irritates me, however I had put in a good week of ‘speed’ in prep for Chicago Triathlon and could feel the fatigue in my legs. So, I just tried to keep her ‘in sight’, which I was able to do. I came off the 13.8-mile rolling bike course about 45 seconds or so behind her, so I knew I had to get on the run quickly. Surprise, surprise…my running legs felt quite snappy! But I don’t like to wait until the last minute to do things, so I tried to overtake her as soon as I could (sorry Andrea…just the competitor in us!) which I was able to do by about mile 1, though she was very strong out there today. I believe I caught a run split of about 5:45 in the middle of the 5k, but I may be mistaken…anyhoo, I was able to finish strong (in 6:02/mile pace) for the win today which was great! I just love these races, as I know so many people out there, familiar faces…Derick had a very solid race for himself (especially the swim and his run, which was 5:29/mile pace despite not really ‘training’ much…I think the last time he swam was about 3 weeks ago!) and I guess that he lept across the finish line…that’s my guy… 🙂 While he can be just as competitive as the next, he knows how to keep it all in perspective and just have fun, which is so important. It’s just a sport, after all.

Sidenote, Source Endurance’s own Stefan Rothe was the 4th overall male out there…a day after finishing 3rd in the Texas TT State Championships! I think that Stefan could have a triathlon career for himself, if he so chose. And nice race to Andrea Fisher and Hollie Kenney (3rd), who is new to Austin! Thanks to Jack and Adams for putting on a hell of a fun day as they always do, to AJ Zelinski of Advanced Rehabilitation for taking care of me and my oh-so-sore (jacked up) back immediately post-race. Thanks as well to Zoot Sports for the continued support, and to Matt Tanner for helping me rig up my fancy ride with the kick-ass pink flowers on my wheels. Have ya’ll seen them yet? Check out Wheeltags. Great little new biz out of Indianapolis. (See below) 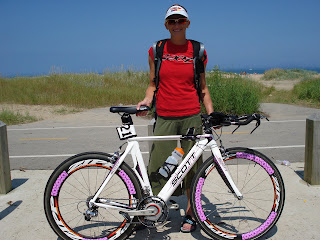 That is it for me for today…amazing how a 1-hr race can really waste you. Derick and I hit up Taco Deli after the race and I ate as much as he did, I impressed myself. Thank you for reading…and if you are in Austin, please, stay cool! And if you do choose to do Jacks Generic ever in the future, remember, it is the only race where

“You’re more than just a number, you’re a barcode!”

P.S. 41 & Counting…Just heard on the news that we have had 41 days over 100 here in Austin, thus far…sounds awesome, doesn’t it? Especially since I hate the mountains and love the heat…yea…riight……

6 replies on “Jacks Generic : Today, I am a Winning Barcode”

So great to see you yesterday!! mer

And I thought it was bad that we had 20 something days over 90 in Colorado!

Thanks Kelly! You rocked out there yesterday!!!!!

wow, you really chicked your soon to be hubby, way to go!

yes! though i found out upon walking out of transition…his rear wheel was not spinning @ all..I think he had some severe brake rub going on the whole bike leg…damnit…!