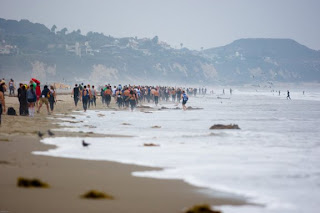 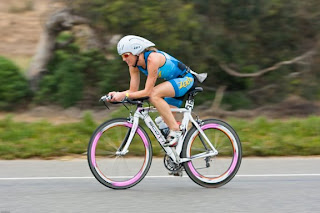 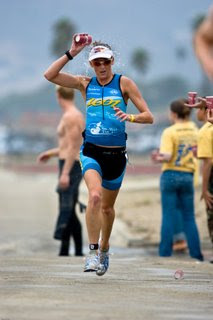 Photos Courtesy of Daniel Derkacs
I am back in Austin, unpacked, bike built and laundry going from my trip to California. I even had a couple of margaritas and some good mexican food (my favorite, Polvos), since Emily Strong Wenger (yes this is her real name, she got married a week ago and Emily Strong became Emily Strong Wenger…prefers to go by Emily S. Wenger)…picked me up and took me out. Derick got ‘swept away’ to a little boys night/batchelor party.

I come back with a bit of ‘smugness’, as I am pretty unhappy with how my race played out. However, having been at this sport for 8 years, I know that each and every race cannot go perfectly and if it does not, then the best thing we can do is learn from it and move on. Meaning, note to self: Suck it up Kelly and stop moping.
It was an incredible setting, as we swam at Zuma Beach in Malibu, a beautiful ocean swim (another note to self, should have taken Zoot Zenith wetsuit as water was a bit chilly), biked up and back the Pacific Coast Highway and ran down along the ocean and back. This was the first year for this event (Nautica Malibu Triathlon) and one thing I will give them as feedback is do not start the professional men, professional women and men 18-24 all together. Our wave had to consist of 100+ people, and thus I had not clue who to ‘stick to’ and try to stay witn on the swim. Not to complain, as I was 2 minutes back from the lead woman!, but a bit frustrating as I feel this was really where I lost the race. However, I had no idea of this coming out of the water…I loved the ocean swim! You feel so bouyant and the waves are so large and rolling, I may have enjoyed it so much I found a Zen state and forgot about racing…but anyway…

The bike felt strong and I passed a few women, but I realized that a good 5-6 were ahead of me. I wanted to be Top 3 here, but as any race plays out, you learn to just do your absolute best and hope to catch people along the way. Coming off the bike, I saw many women heading out running. I did not like this. 🙂 I knew I had a few mintues to make up. I bolted out of T2 and the run felt fantastic. Downside of this is, seeing the splits, it was ‘solid’ but far from ‘fantastic’. I ran into what I thought was 5th place, however was told 6th…UGH! What do they say? A ‘tie’ is like kissing your sister? So is getting 6th when the prize money goes 5 deep.

However…there were many highlights to this trip. #1, my homestay. Tina Sathoff and her husband (she is part of the LA Triathlon Club) were beyond accomodating, made me feel so at home and bent over backwards to make this a relaxing and wonderful trip. I mean, she and I had drinks on Rodando Beach pier on Thursday night, and we spent Saturday night at her house watching Ohio State get pummeled by USC (not good) drinking good beer and eating grilled steaks…what more can one ask for? 🙂 I also got to see and race in an area I have not before.

As odd as it seems, I feel very good about my personal race this weekend…I feel like I put it all out there and did not make any mistakes. That is tough to say seeing on paper that I got mashed like a bug by many other women, but I have to be honest…maybe I just got in a bad position on the swim, but I am not one to make excuses…I think all in all this just was not my day. I had a solid run time, but compared to the others, not quite as fast as it felt. But, I am thankful for a safe trip and having met some incredible people along the way…Thank You again to Tina and Blake and the organizers for having set up up in LA!

NOW, I can actually take a week and forget about good or bad training or racing and enjoy something so much bigger, getting married to an amazing person and spending a week with family and friends. As I often say, it is ALL about balance….
Thank you for reading.