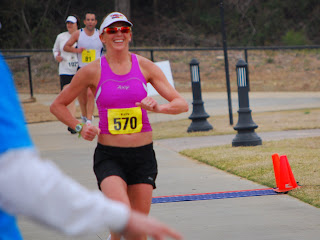 …but best news, I didn’t! I stayed vertical for the entire race this weekend. I did not ‘really’ think I’d fall, but with the track record I was going into the race with, it was a distinct possibility…

It was a fantastic weekend. I arrived into Birmingham, AL on Thursday evening and stayed with a very good friend of mine, Laura Reid (Svihlik). She was nice enough to drive me to Albany, GA on Friday (~4 hrs) where we were put up by the race directors in a great hotel, right by the race start. Even better, my parents made it too! They were en route to Florida on a road trip and happened to be staying only 45 min away in a hotel on Friday night. So, Saturday AM they drove over and we all hung out before the 7am race start.

This event (Snickers Albany Marathon) was so low key, which I LOVE. I jogged down towards the start to warmup at about 6:15 am and I saw them setting up the start. I don’t think they even put the timing mat down until at least 6:30. But, they got it done! The weather was bizarre; 45-degrees and 98% humidity. The first 10 miles were literally run in a fog, and I was wet, despite the fact that the sun was not out, it was not hot and it was not raining. They sent us off promptly at 7:00 (or maybe 7:05), and it was me and a bunch of guys. I have never raced for $3000 and not seen one single woman around me. Granted, I was not complaining! I was there to win and to put up a best time, and the only one in control of this was me. 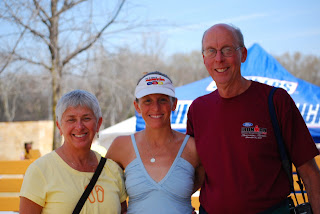 I took off in a 6:15 pace for my first mile. My plan was 6:30’s, no faster, for at least 15 miles, then see how I felt. I was so disciplined, as my second mile was 6:45 pace! However, I was somehow able to stabilize right around 6:25 to 6:35 on all of the miles. I know I had a few faster ones, but they felt so good and I felt so in control, I did not worry about it. I began to run with the coolest guy, a 50-year old man who was aiming to run a 2:50. We had the best energy going between us, as we both cruised through the 13.1 mile mark at just under 1:25. The fog began to lift and by about 2 hrs into the race, and I even put my sun glasses on. I was taking a PowerGel every 5-6 miles, and by mile 23 I took my 5th and final gel. The nutrition was spot-on, and my stomach was cooperating. Things were looking good!

I am learning despite the fact that this was only my second marathon that this rule “the race starts at mile 20” could not be more true. My interpretation is, *try* to get to mile 20 feeling good. I accomplished this, but between mile 20 and 22, it went from feeling smooth and controlled to feeling a bit labored, as my legs began to cramp up pretty badly. I still checked my paces, and I believe that mile 22 was about 6:45 and mile 23 was about 7:00. I could feel the body starting to fatigue quickly, but I knew that a low 2:50 was still within reach. This is where some self-talk kicked in… “Kelly, relax and keep on going. Do not worry about the mile paces, you have this race won if you don’t fall down and collapse…you can do anything for 20 minutes…” It is incredible what this can do for you. I started to see more people cheering by mile 24, and this really helped, as I was into the straight up feeling crappy mode by this point. But it simply felt like my legs wanted to stop; physically, I felt good; I wanted to pick it up but the legs were not having it.

I finally got to mile 25 when I felt I could relax, knowing I was going to win it and also get a PR. They ran us through a train station at the end, which was very cool! We jogged down a side walk, through a tunnel and there was the light! Mile 26 marker! At this point, I saw the finish banner and boy was I a happy girl right about now. I looked at my watch and saw it approaching 2:52. The ‘under 2:50 if you feel good today’ goal became ‘be a 2:52-something’. I was actually able to push the last 100 meters or so and was so happy! It was not the time I thought was within reach earlier on (even up to mile 18), however it was a win, a best time and it was every ounce of what was in me on the day.

If there is anyone out there who is contemplaing a marathon, I highly recommend it. There is something about it, something different from even a half-ironman triathlon. It’s just all running, all legs, virtually all the same muscles working for 26 miles. There is so much strategy involved, and I think what I learned from my first to my second one was how important it is to have a PLAN. Last time it was ‘run a 2:47ish’. To be entirely honest, that pace was so out of reach for me at that time…I was on a very hard course and I had not trained enough and FAST enough to really do that time. I went out and really just wanted to hold 6:25’s or so for as long as I could. What a mistake it was! I crashed and burned by mile 18 and I am shocked I finished. This time, it was to go out steady and at or slower than my goal pace. Every time a mile was too fast, I backed it off to what ‘felt’ easy. I felt like I was in control for almost the entire thing (until my legs decided otherwise). Anyone ‘can’ do it, I fully believe, it is just about staying within yourself; know what that is and setting up your game plan ahead of time. This is something that only you know. You know better than your running buddies, your coach or your best friend what you are capable of doing. It’s putting the ‘what I want to do’ next to the ‘what I am capable of doing’ and finding the happy medium. 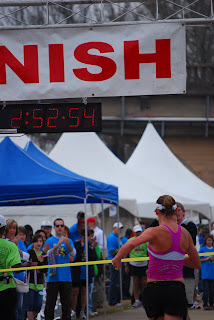 We always want to be a little bit faster, but I was on cloud 9 after this race. A large part was that there were so many important people there with me for me to enjoy this with. I feel like any success’ that I have are 50% hard work and determination, and 50% from the amazing support system that I have. I never feel like I have to live up to anyones expectations except my own, and I am so grateful to my friends and family who help me to believe in doing what sometimes seems unattainable…I think this race was an example of the heart wanting what the brain knew was possible, but the mind was not admitting to. And what I did was put any doubts far to the back of my mind and let my body be in control the entire race, with my head keeping it in check. If this thing is a ‘journey’ to me, I cannot fathom what a full Ironman would be like. 🙂

3 replies on “Albany Marathon – How it all went down…”

Congrats Kelly! You are awesome 🙂

Amen for such a wonderful day! You earned it, and so so awesome. Hope you have a wonderful recovery and can enjoy the success for a bit longer 🙂 mer

AMAZING! I’m so happy for you. Your attitude is incredibly inspiring . Keep it up girl – the Ironman’s got nothing on you!