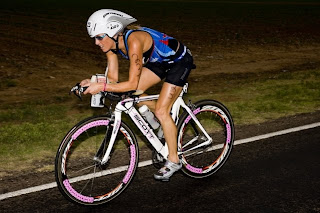 This was my 4th time in Lubbock, Texas. Despite the reputation that Lubbock has, for some reason, I really like going to this race. I am sure it has to do with the very laid back atmosphere of the race that directors Mike and Marti Greer assume, and the entire setting of the event (the middle of nowhere!). It kind of takes me back to my triathlon roots, doing the local Indiana races out in the middle of cornfields. Though, Indiana does not have the Canyons and climbs that Lubbock has, it is held in a park with lots of camping spaces…also taking me back to my roots (we camped more than we hotel’ed growing up).

I had to solo this trip, since Derick was up in Portland, Maine for the National Mountain Running Championships this same weekend. However, I was ready for some Kelly Time. I am a big fan of being alone, especially when I feel the need to just relax and unwind. I drove out on Friday, and had a great dinner with an athlete of mine that evening who was tackling this event for her first time. I then felt the need to go to Dairy Queen (they were everywhere in Lubbock) and get a Blizzard. Great pre-race food, eh? I did only eat half of it…a cookie dough blizzard…not that I cared about eating it all, but they are RICH. I didn’t want to have any regrets (and this is on top of eating 10, yes 10 prunes in the car en route to Lubbock; they just tasted so good! and did you know they are high in ANTIOXIDANTS? we all need those!). Luckily, there were no serious repercussions of my ice cream, or my prunes. 🙂 However had there of been, I would have spared you any details.

I took it very easy on Saturday, but I have learned in the past that too much rest actually makes me very lethargic on the bike. Friday I did an easy open water swim before leaving town (about 20 minutes), so Saturday, I did a ~15 min run first thing in the morning then went outside, checked my shifting and took the bike indoors for a 20 min trainer spin. The advantages of driving to a race! I was racing on tubulars, and I did not want to risk flatting on rough roads the day before the event. Pro meeting was at 3:00, which I snuck into the back of the room for and left immediately after it finished. I headed to Orlandos, the local Italian joint for an early dinner (4:00!) and enjoyed some pasta, salad, bread and a Peroni (mmm….) while sitting in the bar reading my ‘Sun’ magazine. I was in my room and chilling out in bed by 6:00pm. I highly recommend this, especially when the alarm is set for 3:40 AM! I had the lights out by 9:50 and for once in my life, slept so soundly. This is VERY rare! I often wake up constantly, anticipating the all-too-early wake up call. Maybe I was very relaxed?

Sunday morning arrived, and I was out the door by 4:45. Since I did not have the luxury of Derick dropping me off, I decided to allow plenty of time to get into the park and into transition area. As I pulled in, I noticed… HOLY WIND! I had never in 4 years seen this much wind at the park! I have to admit I was a bit freaked out by it. But, what can you do? The others did not seem too concerned, so I could not show my fear. 🙂 I set things up and headed down to the water for our 6:30 AM start.

One concern: Goggle color. I had a pair of pink goggles with mild tint, and it was a very dark morning. I was barely able to see the buoys when we took off, but luckily I could. Note: ALWAYS have a light and dark pair of goggles with you. I definitely could have used even lighter lenses this morning. Stupid mistake. The swim was a bit choppy (non-wetsuit for us, so I used my trusty Zoot Speedsuit which was great) but not too bad. I somehow ended up swimming far to the right. I noticed another pro woman far to my left, but she seemed to me to be swimming an odd line, so I ventured out on my own. Seeing that I ended up 2nd by less than 90 seconds, I would hate to think that I lost time by taking a longer line in the swim… so I won’t think about it. I came out as the first woman, feeling strong and ready to ride.

I headed out on the bike and felt very strong from the git-go. You have to climb out of the park, and it is almost 5 miles to simply get to the main roads. I got down into my aero position and just went for it, from the start. I had a terrible bike at Eagleman and knew I could not afford to lose any time. I was riding strong but somehow Amy passed me and I did not even notice! Then about 25 miles or so into the course, Joanna Lawn passed me (so I was thinking I was now in 2nd… which was ok). However, I saw Amy go by me on a turnaround in the opposite direction.. How did she get there? I then just rode harder, thinking I may have missed more women! Then the rain started and was actually pelting us for awhile. For some reason, I was loving it. The roads were slick so I was (very) cautious on the descents, but talk about crazy weather! I literally smiled and thought, “Bring it on, Lubbock!”

I was pretty stoked that when Jo Lawn went by, she did not do it swiftly. I was able to keep her in my sights for some time, and even make up ground on the tough climbs. I took in my entire Gu flask (which held 4 gels) and also 3 more on the bike leg… that is, 7 GELS on the bike! This is probably on the high end, however, I was stomaching it and I was feeling the need for energy near the end. Last thing I wanted to say was to run out of gas.

I came into T2 in the pouring rain to a soggy towel and some soaked Zoot shoes, but grabbed the shoes, Jack and Adams visor, Gu flask (first time I have ever done a flask and not individual packs on the run; thinking ‘Ironman!’) and was out of there. I had 2 people to try to run down! I knew I had my work cut out for me, as I expected Amy to be pretty far up. I started out the first mile and did not see my split but knew I was going pretty fast and actually told myself “SLOW DOWN”. I could see Jo Lawn up ahead and was fairly confident that I could catch her if I just held steady. This has become my mantra starting the run, I am always so anxious to make up time; “steady, steady, steady”. I ran through puddles and up and down the hills; while it was tough, this run course really is kind of fun because you cannot see too far ahead for the first 4 miles and you know the hills are just waiting for you. Again I focused on calories; I carried a Gu flask with 4 gels in and sipped it every mile or so. I caught 2nd place at about mile 5, and tried to keep my pace steady. I then hit ‘Energy Lab Road’ as they call it, a LONG straight out and back stretch between miles 5 and 8. I saw Amy coming back and knew she still had a couple of minutes on me. Damnit! Was my only thought. I kept on plugging away, tried to bomb down the hills on the way back in and finally hit the final 3 miles; winding through the campgrounds, around the lake, towards home. Unfortunately, I ran out of time, but I was giving it all I had at this point. Amy put up a great race, and I fell short by less than 1.5 minutes. My finish was good for 2nd place, and I crossed the finish line with a smile on my face and a happy heart.

This race was a big turnaround from Eagleman 70.3. Then, my cycling legs just did not want to work. Today, I felt like I was constantly pushing pushing pushing harder and harder on the bike. I never looked back, to see who was there. I feel when you do that, you succumb to weakness…it’s just a thing for me, but I have to focus on my race, what is ahead and doing my best; despite if women are ‘cycling me down’. I biked this course like there was no run; and, when I came onto the run, I was a bit nervous if I had blown myself. But it was so encouraging to see that the running legs were still there, enough to give me a 1:26 and best run split out there by 3 minutes. This race really gives me some much needed confidence towards this Ironman push. Canada is in just 2 months! Derick and I have a short trip planned to see family in North Carolina this weekend, but then it will be a big training block for Canada. And, a short trip to Colorado for a friends wedding. Hopefully my weaknesses out there (The Loop, Kinfolks and Wooglins) will not ruin all this hard work. 🙂

While I wanted a win out there in Lubbock, second place was all that was in me on this day. When I know that I gave it 100%, then I am satisfied; even if it was 2nd place. Thanks to Mike and Marti Greer for putting on yet another spectacular event (20 years in the running) and all of those who support me to help me make this happen… Hill Country Running, 3 Cosas, Zoot, Advanced Rehabiliation, Go with the Flo, and Jack and Adams. Next time, I will hopefully have enough time to make up those 90 seconds… I’d imagine that 140 miles should be enough time to do a lot of things!

Thanks for stopping by… 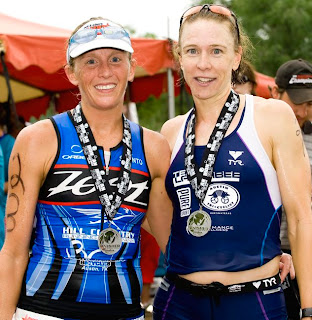 Amy Marsh and I at the finish (Courtesy of Mario Cantu)
.

I think we are just kindred spirits. I thought you maybe saw mine and then changed to it! Too funny!
I miss you too. I think I need to plan a visit to see you this fall. It's my turn (times 10). Love you!

Great race. I love how you rode the bike like there was no run after it – I've been trying to learn to do this! Good luck at IMC!!

Kelly- I was really excited to see you finished 2nd at this race. Congratulations and best of luck in Canada.