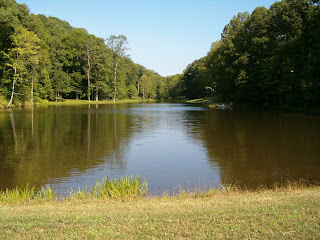 I am still in Indiana, at my parents cabin, savoring the last few hours here. This place is true heaven; it is tucked in the hills of Southern Indiana, on about 100 acres, surrounded by forest, with a small private lake right off the deck. I was able to wrap in a few days visit here with a race this weekend, which makes for a mildly stressful (race) but in turn very relaxing trip away from Austin. Not to mention, I have had about 5 days out of the heat. Additionally, I get to swim in their lake every day. The water is the clearest they have seen it in 6 years, and I can stand on their deck and see anywhere from 3-5 turtles at one time floating on the surface! Luckily, none are snapping.

I opted to do Steelhead 70.3 about 3 weeks ago. My mom said “Find a race in Michigan to do!” Little did she know, I would do just that! I had no idea that this race was putting up a pro prize purse this year, and seeing that it was 4 weeks out from IM Canada, I figured it would be a great little tune-up. I tried some things I’ll do in Canada, including 1) Zipp 808 clinchers (courtesy of Zoot team) which worked great, and 2) supplies in a cut open water bottle on my bike frame for a flat. Much to my surprise, all stayed in tact and the setup seemed to work well. I did not have the time to figure out my nutrition setup yet (ie: using a bento box, likely) so on that, I will have to wing it in Canada.

I arrived in Thursday to Indianapolis, spent a night here at ‘the cabin’ and then Friday my mom and I drove up to Benton Harbor. Beautiful drive! Indiana is so green and the weather so cool right now, actually made me miss Indiana. The logistics seemed a bit whacky when we arrived, as I did packet pickup, then back to the college for a meeting at 4, then to dinner then at about 7:00 we checked out where we would go in the morning (the transition area). It was a very pretty setting (I am still shocked that Lake Michigan is actually a ‘lake’, looked very much like an ocean to me) and despite being pretty tired by 8:00 pm from the hectic-nes of the day, I slept well for the 3:45 AM wake up call.

We headed out the door at about 5:00 to the race, all checked out of our hotel and ready to go. Arrived early, set up my transition area in the dark; noticed that when I spun my rear wheel, it stopped. Hmm… not good. I found a mechanic who fixed it, but I also noticed when racing every time I stood, I heard a ‘swoosh, swoosh’ so I need to get that figured out before Canada. We were off promptly at 7:02, 2 minutes behind the men.

Swim: The swim was what I call ‘bouncy’. We did not go too far out in the ocean (sorry, um… ‘lake’) but there were big rolling waves. I would sight and either see a big swell, or perhaps catch a glimpse of the buoy. So, you needed to sight frequently or you could end up getting pushed into the shore. I felt alright; though this swim felt long (one straight line). I was just off the back of the lead pack, ended with a 25-something which was OK. I mostly swam on my own. I tend to always do this. I like my space; though, the drafting would have been nice. 🙂

Bike: T1 was a transition, rather long run to the bike but I got there and headed out as quickly as I could. I believe I was told I was in 5th place. Unfortnately, I would not come back in in 5th place. 🙂 I felt rather strong for the first 25 miles, but I could tell that it was not coming easy. I was passed by a few women out there, all of whom looked stronger than I felt, but I tried to stay positive. The course was nice, yet the roads were rather bumpy (chip-seal-ey) and the last 10-15 miles, we faced a pretty strong headwind. However, I felt bad for all those racers after us, because a storm was blowing in so they likely felt more of this than we did! Needless to say, the last 10 miles of the bike, all I could think about was “I cannot WAIT to be running.” I came off the bike in probably 8th or 9th place, so I had my work cut out for me if I wanted to finish within the top 5.

Run: I entered our LONG transition area, threw on my new Zoot racing shoes, grabbed some gels and was out of there. I passed 2 women within the first couple of miles, so that felt good. I was checking my watch every so often, running anywhere between 6:10 and 6:25 miles. Not bad, but not scorching fast. But it was OK, I could not see many women in sight so I knew all I could do was stick the pace where I felt good and grind away. I felt a sharp pain in my lower right leg, it hurt every time my foot landed, starting at about mile 3. Pretty odd, but I just tried to ignore it; definitely something I had not felt before. Almost felt like an anterior tendon near my ankle. The run course was nice, it was a mix of roads, neighborhoods and even a cool little running path through the woods. Michael Lovato was out there telling us where we were, so at halfway through, he told me I was closing in on 5th place. That was nice to hear. The next time I saw him, I had about 4 miles left, and he told me that I was 2:00-2:20 down from Amanda, his wife; but finished it with “Keep it up!” Talk about class. I did not think I could catch her, as I know she is a great runner but with about 1 mile to go I saw what I thought was her up ahead. I tried to mentally do the “Only 1 mile, all you’ve got!” and just give it whatever I had left. I was able to push hard that last mile and run my way into 4th place, which considering the hideous bike I had, I was pleased with. Big props to the other women out there racing; I sure had to work my ass off for that finish today!

All in all, a solid race, beautiful day and nice setting. I was very excited to hear that I had posted the fastest pro womens run split by 4 minutes! However, looking at the bike splits, I still have a ways to go. It is tough to work so hard at one discipline (for me, the bike) and still see little progress. But, you know this is the sport; we all have our strengths and weaknesses. I am willing to accept this, and when racing, try to gain as much time as I can on the swim and the run and then on the bike, try to minimize my losses. While I often bike like there is no run in a 1/2 IM (or shorter), I am just not as strong as the other women. That is OK, my focus in Canada is to ride within myself. This is a huge challenge that lies ahead of me. I am sure the nerves will start to surface these next few weeks, and I’ll put in one more BIG ride. But, I need to simply get out there, race smart and enjoy the process. ‘Cause if I am not enjoying it, it is a LONG time to be in misery! The toughest part will be staying positive and strong, (especially mentally) on the bike. I think this is where we all struggle most in triathlon, not beating ourselves up from our weakest discipline; especially during the race.

I want to give a big thanks to those who have helped me out so much this summer and season thus far: Jamie and Andrea at Hill Country Running, Cecilia at 3 Cosas massage, AJ Zelinski and his crew at Advanced Rehabilitation, Zoot Ultra team (including Suunto, Gu, Nutrafig, Zipp, Alcis, and Orbea) and of course Jack and Adams bike shop in Austin. You all help me so much and it is very much appreciated. And of course, my husband Derick, who is aways nothing but supportive; even when I get stressed and slightly crazy. 🙂

Thanks for reading. Another day of chillaxin’ in Indiana, then back to Hot Austin for the final push to Canada!

Sounds grueling; must remember how much is mental; I cannot imagine accomplishing this. Congrats on your very strong run; No injury in your leg, I hope.

Hey Kelly- I just had an idea. I think we would make a fabulous relay team if you're game! 😉 Think we can find one with a prize purse?

I'll be rootin' for you in IM. Great to see you again and congrats on another fab finish.

awesome run (and race) kelly! wish i could have been there to see it. but i'll be at longhorn in october, woohoo!

hey can i do transitions on your and amy's relay team? or i am thinking of rigging a sail for my back to use during the swim. it says no fins in the rules, but i didn't see no sails!