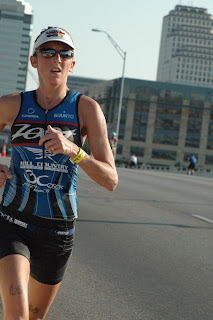 After a pretty horrendous week in Canada, and a slow recovery from what I am going to say was Swine Flu so that I will now officially be ‘immune’, I began to feel more like myself this past weekend. Well, I actually started this a few days ago, so now this would be LAST weekend… Labor Day weekend. Derick and I went out for a ride on Saturday and I tried to stay on his wheel for about 15 minutes. Seeing that it did not cook me too terribly bad, I decided… ‘ah, what the hey! I’ll race Austin Tri on Monday!’. I had a hard time not doing this, especially seeing that I was not able to ‘sit back, relax and watch it’ with the extreme fatigue and feelings of elation I had hoped for from the previous weekend (ie: not finishing Canada). So, Sunday at the pro panel, I decided to enter and hope for the best! 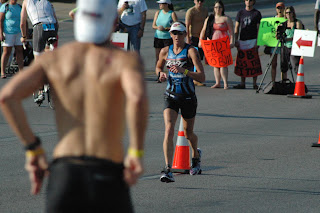 This was a completely unplanned race, so for some reason, I don’t see it worthy of a ‘full on’ race report. I have to think that those get so old sometimes… so, I’ll just do a brief synopsis of the event. I got up Monday morning pretty easily, along with Derick who was racing too!, and we meandered down the hill to Auditorium Shores for the 7am start. Nice morning, but muggy and warm as you could imagine. But, that is Austin and we are all used to it. We were off right at 7:00 (from what I heard from Dan with High Five Events, it was PROMPTLY at 7:00!) and we began a-swimmin’. I quickly got into my typical no-mans-land (or, let’s call it “Kelly’s Land”) and proceeded to swim the 1500 solo. After about 5 minutes, I thought, “Oh shit. I feel weak. No snap. This was a bad idea.” to which I countered my thought, “To bad missy. You came out here and you’ll race and you’ll love it and you’ll do fine.” Guess you could say I am pretty hard on myself, especially when racing! I definitely have a ‘game face’. 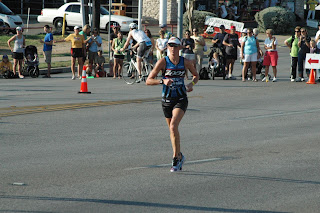 Out of swim behind speedy girl Sierra Snyder, and onto the bike, whereby she and I seemed to leapfrog one another for about 1.5 of the 3 laps. She is one strong swimmer-cyclist! Watch for her in Kona. I was feeling rather decent, though I will say pushing myself extremely hard (I think I was taking out my anger about Canada out there!) and thinking “It’ll either be great or I’ll blow up bigtime.” Derick passed me about 1.5 miles into it and was looking great. I could still see a few women behind me, but was not sure if they were gaining ground. Come to find out, they were…I came off the bike still in first! but, Des was right on my heels. She had a solid bike, as did Mina Pizzini from Dallas. They both gained about 2 minutes on me on the bike. But, I kind of expected that… 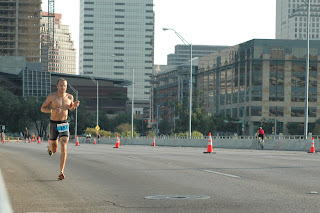 Onto the run! And I was so excited, I forgot my gel! Crap. But nothing to do at this point, I was well on my way out of transition and I could hear Des’s ‘pitter patter’ of feet behind me. I know that she has been doing a lot of running, and she is already speedy so I had no doubt that she would be strong on the run. We exited transition and took the long run on the grass, out onto the road and began lap 1 of 2. I actually held her off for about 2-3 miles, then she swiftly passed me to which I think I responded, “It’s yours. I don’t have another gear. Go for it.” By no means was I giving up, but I was truly shocked that my body was giving me this much after the past week, and I knew that I was not physically up for a battle of a race. I was pleased that she did still only have me by about 30 seconds at the finish, so I was good for a solid 2nd place, right ahead of fellow Austin-er Terra Castro, which was great to see her right there as well.

Hmm…no race report? I guess I got carried away. I guess the take home lesson from this one is, don’t be afraid to JUST RACE because it is fun! I knew that I was not going into this optimally (rested? yes… a bit weak? yes, too) but I just wanted to get right back on the horse from Canada. I knew that this was a ‘backyard’ race, and I love to support Jack and Adams, so in my opinion watching it would have been so much harder. And, it was not easy racing it! I am so glad I did it, and pushed my worries of “Am I ‘well’ enough?” out of my mind. To top it off, Derick finished in a solid 6th place among a very strong field of men! So fun to have him out there racing. Congrats to all those finishers out there on Monday, it was a hot day and no matter when you were running, it was challenging. Also, a special THANKS to Jamie and Andrea at Hill Country Running for their support, as well as Cecilia at 3 Cosas, Zoot, Jack and Adams , AJ at Advanced Rehab and Karen at Go With the Flo (my acupuncturist). You all make this entire process a lot of fun and a bit easier on me, so I cannot thank you enough.

Thanks for reading and don’t be afraid to JUST GO RACE! Throw aside your doubts, worries or fears. We’ll always have them, but best to just jump into the game and give it what you’ve got. That’s living. 🙂

What does the fall hold for you?