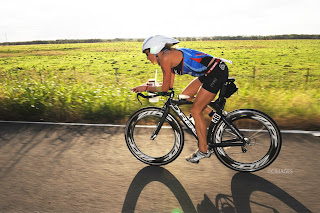 It is a cold, dreary, rainy Monday morning in Austin today; the morning after Longhorn 70.3. All of those whom competed, spectated and volunteered are probably quite happy that this weather did not hit 24 hours earlier. On the contrary, we lucked out with an absolutely perfect day for yesterdays event of 2500 people.

Derick (husband and fellow racer today) dropped me off at the lake (or) swim-to-bike transition at about 5:45, and he then drove himself to the arena to park and take a shuttle. Nice husband he is…he did not back to the lake (start area) for over an hour! Seeing that my start time was 7:30 AM, I would have been flipping out had I of rolled in there at 7:00. It was a pretty dark and chilly (but not cold) morning. In all reality, it was ideal weather. The swim was wetsuit legal for both pros and amateurs, so I put on my sleeveless Zoot wetsuit around 7:00 and headed to the water. I often opt for sleeveless in any water temperatures above 70-degrees, as I get warm pretty easily. Once the Run Far gang corralled the pros back behind the timing mats, we made our way into Decker Lake for the in-water start promptly at 7:30.

There was no real ‘start line’, so when the countdown started (“10, 9, 8”) and everyone (men and women together) began to inch forward (with comments like, “It’s not me, it’s the current!”) I had to laugh when Joanna Zeiger yelled out, “OH, come on, guys! Seriously!” She had a point, but what could be done?! I started inching as well. I need all the help I can get with the starts, especially with men. Unfortunately, I had a horrible start, got pretty buried and pushed by the crowd into the first buoy. I’ve got great, steady speed in the water, but when it comes to fast, brutal, crowded starts, I do not fare so well. I finally found some clean water after about 5 minutes and settled in, as usual, solo! The swim was very legit this year, but I did not ever feel great. I just tried to keep on pushing, getting stronger as I went, and actually looking forward to the bike (my how things have changed over the years).

The big question I found myself asking as I came to the finish was, wetsuit strippers or not? In Canada, I used them and they could not get the suit off of my feet. So this time, I ran by them, in part because I knew I had a few women ahead of me and I did not want to sit down. However, I got to my bike and fumbled for what seemed like minutes with getting my suit off my ankles. Note to self: Cut the ankles higher. I got onto my Orbea Ordu, still only the second race with the new bike, rather, shall we say, angry? (putting it nicely). I knew there were a few women ahead of me, and I also knew they were strong on the bike. I put my head down and just went, as hard as I could within reason. I stuck to my regular nutrition plan, plenty of water and about 6 gels in the course of the 2.5 hrs on the bike. I know for some professional women, a 2:30 bike split is nothing to write home about. But it is all about improving within onself. Last year, I did a 2:39. So this year, I will take 2:32 and run with it. There is something about my Orbea in which I feel I can truly push power that I have not been able to do in the past, very comfortable in the TT position. I exited my bike, headed out on the run, and heard that I was in 9th or 10th place; not at all where I had hoped to be. But, what can you do except keep your chin up, stay focused and execute a plan? That I did.

I ran through the Luedecke Arena (Keith Jordan had the finish line indoors in the arena, a very cool setup!) for the 3-loop run course. I could see a few women up ahead, but I knew that the top few women were quite a ways up on me. I definitely had my work cut out for me, but the legs felt strong. I pushed out for the first few miles, up and down (the course was not too often flat, mostly rolling hills and some dirt/rocky sections) and moved into about 6th place after the first loop. Better, but still not where I wanted to be. The crowd support was amazing! My husband Derick said the same thing that I did, it was so motivating and awesome to hear our names by so many people cheering. I was feeling good, checking my mile splits occasionally, and knew I was running about as fast as I could without blowing up. I stayed on top of my nutrition, which was a gel flask with 4 gels in it. I tried to sip on it about every 2 miles or so. I could tell each time that Joanna passed me in the opposite direction, I was gaining on her, but probably not quickly enough to catch her. And the amazing bike split of 2:16 that Heather Jackson threw down was very tough to gain time on. But, I kept plugging away. With about 2 miles to go, I started to pick it up a bit more, and at mile 12, I just put it all out there. I knew that noone was in my sight, but I like to know I have left it all on the line. I approached the arena, ran through the finish chute and raised my arms in thanks to all those cheering. There is always something to be thankful for after finishing any race.

It was not the finish that I had been seeking at this race, a huge hometown event. I ended up 4th, only about 1 minute out of 3rd, but with a 1:19.45 run split, a PR for me. My race overall was 4:21, which is another PR overall time next to Augusta. I cannot complain. We cannot control who shows up, who is going to have a stellar day, and what our bodies are going to give to us on race day. We can control how we react to situations, what our attitude is and what kind of fight is within us each and every time. I never like to make excuses; and today, in Austin, I did all I could to finish my absolute best. The support of the crowd, my family who was here (my mom, sister Robin and 6-year old nephew Will), my husband Derick racing, and all of those in Austin who have helped us out the past 3 years made this a great day. A big thanks to all of the Jack and Adams crew for their hard work in helping this race come together; especially Adam, the announcer. I think that Adam expended more energy than any of us racing!

And a big congrats to all who competed on Sunday. The vibe of this event (ie: Jamie and Andrea at their disco aid station!) truly epitomizes Austin. Keeping it weird, but at the same time, extremely supportive of each and every competitor. If you have not raced in Austin before, put it on your 2010 calendar!

Thanks for reading. Onward to Clearwater in 3 weeks! El Season Finale.

5 replies on “Longhorn 70.3…Still Something to Celebrate”

you are my hero!

you are my hero!

1:19 is smoking Kelly. Congrats on another stellar race!