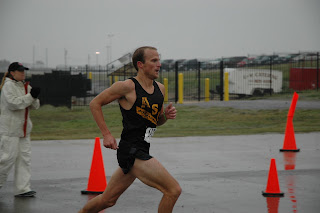 I love December! Not only is it my birthday (which at 32, while I am not phobic of growing old, it is not quite as exciting as say when I was 21), but it is the one month of the year whereby I do what I WANT TO DO each and every day, in terms of ‘training’ (if you call it that). I am horrible at taking time off, or even taking a day off, but when I have complete and total flexibility at simply being ‘active’ each day, I am in heaven. What has that consisted of lately? If in the pool, anywhere between 2k and 3k, if running… usually anything from an easy 30 minutes to 1 hour or even hill repeats for fun, and cycling, lots of time catching up on old 90210 re-runs or Ellen if I ride in the morning. If I had my choice, I would swim, run and do yoga all the time! But ya know; to do triathlons, I have to ride the bicycle. Not that I hate cycling, it is just that we all have those activities (or an activity) which just makes us feel good. For me, that is swimming and running.

Also in the month of December (and January), it is fun to just jump into races. I took this idea to an extreme this past weekend and ‘jumped into’ the Decker Half Marathon! If you live in Austin, you know that this race has a reputation for always having shitty weather. I did it as a 20k back in 2007, and it was about 75 with 90% humidity. This year, it was about 42 with rain! A rather chilly race, but fun nonetheless. Derick and I were quite lame especially for us, who never pass up a good time, and bailed in a pretty big party on Saturday night which most all of our good ‘triathlon friends’ in Austin were fully partaking in. He is doing the Distance Challenge (a series of races culminating in the Austin Marathon in February), so I knew he would be up for the Decker 1/2 on Sunday. So, I figured I would follow suit and race with him. It felt great, surprisingly, as I told myself “I do not want to hurt today” going into it and I really did not hurt until the unrelenting hills and cold took a toll on the quads at about mile 11. We both came away with wins, which was fun (Derick in a 1:12, and me in a 1:23) and had a great time catching up with many friends other crazies who were out there racing as well. I kind of like really bad weather for racing, because it becomes a race of RACING. You kind of forget how you feel and everything being ‘perfect’ and you deal with the conditions. And, the dirtier, messier and more uncomfortable you get, the better the food and hot shower is after the race! THANKS to Leilani and the gang at RED LICORICE EVENTS for putting on a great event!

And I cannot mention Decker Half without mentioning the wonderful care I received 2 days post race. Karen Smith is a local running coach, great friend, running nut and acupuncturist who has helped me out for the past few years, poking needles into me and making me feel good when the body is a bit out of whack. I had a session with her on Tuesday post-race, when my quads were quite recked and my lower back was still a bit tweaked from the traveling for Thanksgiving. If you have not had acupuncture before, you need to try it. It is such an amazing experience. She has one needle she calls the ‘better than drugs’ needle. 🙂 This one goes right between your eyes; this is usually put in after all other needles are stuck, and then she leave the room for 10 minutes or so while you take a ‘nap’. Yesterday, she worked on my front and back side, so I had two ‘naps’ and it was the deepest 10 minutes of sleep (?) I have had in a long time. Hard to explain, but very much like an out of body experience. Interestingly enough, when she put in the needle referring to my gall bladder, it was very painful (as I am scheduled to have my gall bladder REMOVED in January due to gallstones). I repeat… FASCINATING! Thank you Karen!

That is about it going on in Austin. As I said earlier, jumping into races at this time of year is fun. I may hop into the Jingle Bell 5K on Sunday which benefits MADD. It is a festive event and it sure feels good to go out and push yourself until you feel you’ll puke! Even in the off-season! Oh come on, you know what I am talking about…and if you don’t, go and hop into your local Jingle Bell 5k!

Thanks for stopping by… Happy Holidays! Indulge a bit. It is good for the soul.

One reply on “December, Decker Half & Acupuncture!”

This comment has been removed by a blog administrator.