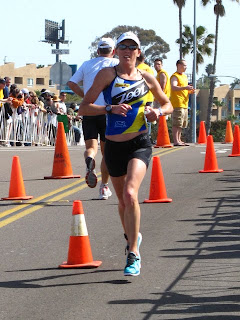 I decided to head out to California for a race which I had only done once, back in 2007, California 70.3 (yes, formerly “Ralphs Half Ironman”). Derick luckily made the trip with me, as we were fortunate to have a place to stay in La Jolla with some friends. I felt strong going into this race, yet a bit nervous as it really was a ‘dust off the cobwebs’ approach having not raced since last November. While the finish was a bit bittersweet, I am overall extremely pleased with the race and how I executed it from start to finish.

We got in on Thursday, as the race was on Saturday so we had a day to unwind (though it never seems you fully have downtime before a big race!). I took Thursday off of training which I frequently do, and did my short 20-30 min spin and 10-15 min run on Friday AM. I have to say, I felt pretty sluggish and heavy-legged on Friday. I completely brushed it off, as I have learned that you can feel spectacular or you can feel horrible the day before a race and it rarely equates directly to how you will perform. I then went to the Nytro shop in Encinitas to meet up with Cary and Chris Brown of Quintana Roo, as they had a tent there to ‘showcase’ so to speak the new CD0.1. It was great to meet them, a few other QR athletes and of course get my ride tuned up a bit for Saturday. It was also pretty cool that there was a Zoot tent next to them, which allowed me to meet Dave who works with Zoot out in CA and chat with him a bit as well about the fancy new kicks they have around the corner for 2011. 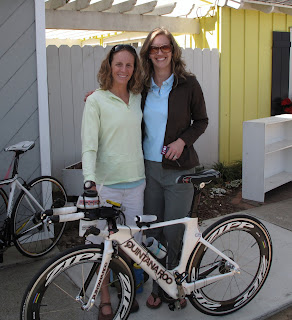 Friday seemed pretty busy as we then went to the expo up in Oceanside (where Jake from Zoot surprised me with a big box of goodies! even some kickass gloves with a hula girl and pineapples on them), did the pro race meeting at 4:00 and the grabbed some dinner on the way back to La Jolla (about a 20 min drive). I like to keep myself relaxed the night before the race, so I indulged a bit in a little cerveza… as you can see, Derick’s was the big mug, mine the little. 🙂 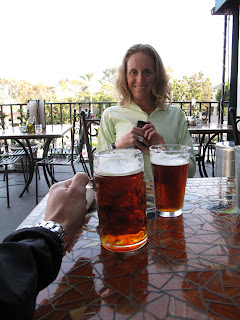 Saturday was a crazy early wake up call, 3:25! But wait, there’s more! I actually woke up at 1:25 AM and jumped out of bed, threw on my hoodie and started to head downstairs for bagel and coffee when Derick said, “What are you doing, it’s 1:30?” My fancy Blackberry Curve did not want to change from Texas time, so a 3:25 alarm was actually 1:25 CA time. Luckily I was able to fall fast asleep again for 2 hours. You probably think that is ridiculously early, but I like to give myself about 3 hours prior to the race start to eat, drink coffee, and really wake up. With a 6:43 start time, this led to a 3:30 wake up call. Painful, but it is nice to get up and get it going. I got to the race site with plenty of time to spare, set up (taking all of about 6 minutes), did about an 8 min jog simply to shake some nerves and warm up and then decided to suit up about 30 min prior to start hoping the Zoot wetsuit would help keep me warm. When we waded into the 59-degree water, I kid you not… it felt warm. Either they were low on the temperature, or the air was so chilly it made the water seem warm by comparison (I vote for the latter). We were off right at 6:43! 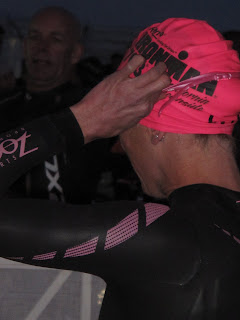 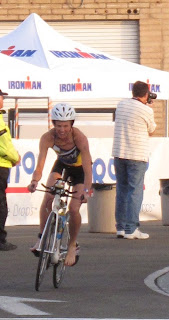 I felt awesome from the start of the swim. No mental struggles with the suit (I sometimes feel that ‘suffocating’ feeling especially starting the season), but I attribute this to having practiced twice in the Pure Austin Quarry, which was all of maybe 58-F. I also attribute feeling strong, confident and relaxed in the swim to the past 2 months training with Texas Longhorn Aquatics. It took me 3 years to buy into it (literally, I did not want to pay for it) but I feel it has been completely worth it, thanks to Whitney and the many lanemates! 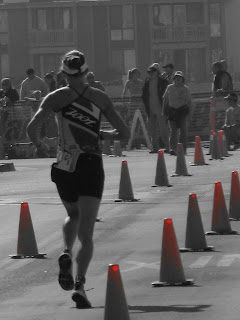 I fell into a nice rhythm and exited the swim within a minute or so of the leaders, Leanda Cave and Pip Taylor. I had a mediocre transition and was off on the bike. This course is challenging and beautiful. I actually would compare it to (at least this year) some of the views I saw at Ironman Canada. Gorgeous, expansive hillsides and some nice long challenging climbs. I felt strong out there, but did get passed by a few women which did not surprise me; though it did motivate me a bit. Even though they passed me, even if I lost sight of them, I tried to realize that I could still lessen the gap. I pushed the hills very hard, recovered quickly and also pushed the flats. My 6 PowerGels went by quickly and I found myself grabbing a 7th one from an aid station (paired with simply water). I exited the bike in about 2:39, which was a 16 min improvement upon my 2007 bike split… WOW! Might I add, upon downloading my power file, I was 20W higher than I had ever been… thanks to training of course but also to my QR CD0.1! This thing rode like a dream. 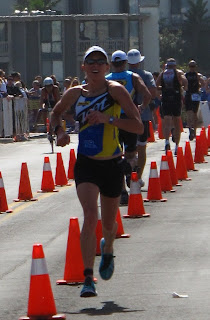 I was excited but I knew I had my work seriously cut out for me, as I could not see many (any?!) women ahead of me going onto the run. As with the bike, the run course here is beautiful. You head out along the water for a few miles, then run into some neighborhoods, thus it is very spectator friendly and the crowds were fantastic. It is 2 loops, so you are only ever about 3 miles away from transition. I was able to move from 9th off the bike into 7th after lap 1, but I could tell that the women ahead of me were running strong. I kept on top of my nutrition, sipping on the gel flask I had (with 4 green apple PowerGels) and tried to keep pushing into lap 2. I was able to pass one more woman at about mile 9, and I could SEE 5th place for the last mile! PAINFUL! I pushed as hard as I could muster, but I fell about 20 seconds shy of 5th (and 39 sec shy of 4th)! However, when all was said and done, I had executed just about the perfect race for me… 3rd out of the swim, a huge PR bike split and a 1:21 on the run, good for 6th overall among an extremely strong field.

It was a bit frustrating to see the times and realize how close I was to top 4, however I see things in the big picture and this was a great start to the 2010 season. I felt strong, controlled and most of all I truly enjoyed racing. I think that is the most exciting part about it all is that, somehow after competing virtually my entire life (I think I started swim races at age 4?!) I still love to compete! I love stepping up to the line, looking around me and realizing that any one of us, on any day, could come out on top. The nerves get to me as they do to all of us, but ultimately it is so exciting to know that we are in control of what happens out there. The days like I had on Saturday are sometimes few and far between, when it all just feels good, and it feels ‘on’. That said, the outcome was not quite as good as I had hoped (I always try to win, no matter who is there!) so I guess therein lies the drive to get back at it again in a few weeks. 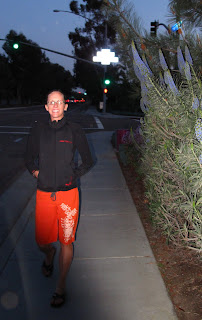 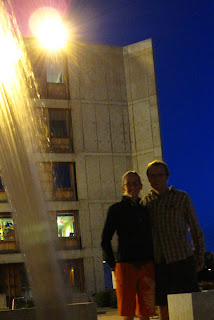 I have to give a big shout out and THANKS to a few people who have helped me out over the past few months: Chris McCrary at Katalyst Multisport for believing in me, the entire gang at Zoot Sports, Quintana Roo for the awesome ride, PowerBar for fueling me with my favorite gels and bars, Xcis Software in Houston for the support, the endless help from all the Austin gang at Jack and Adams, Karen for her excellent needling abilities (acupuncture), AJ and Advanced Rehab, Jamie and Andrea at Hill Country Running and Cecilia of 3 Cosas for the massage work. And of course my family, and my husband Derick for not getting too frustrated at the constant 6:00 AM alarms (who am I kidding, he does not even hear them…!)

Awesome race you had – congrats! Hopefully we'll run into each other at another race this year. Keep it up!

Love the race report…I'm so proud of you. Your going to have a great season this yr.