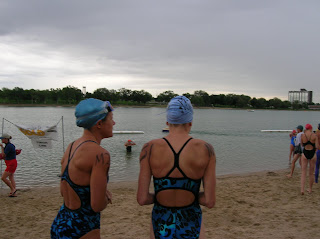 How can swimming in a full wetsuit be scary, you ask? Well, I guess it is the swimmer in me but I feel most at ease and relaxed when it is just me, my stroke and the water. I like to ‘feel’ the water. A sleeveless suit is not so bad, since my arms are free to do their thing naturally, but then you put on a full suit and it feels like your entire body is stuck in this thick mass. Now I will point out, I am using the Zoot Zenith full suit and if there is any that feels good it is this one. The sleeves are significantly thinner than the suit, and the various panels on the suit make it feel very smooth in the water. But to me, it is still not ‘natural’ to have a wetsuit on so I have to prepare for these swims. I tend to feel very clausterphobic after putting on a wetsuit, and so I have to get over this ‘suffocated’ feeling. The suits fit me just fine, but it is more a mental challenge than anything. 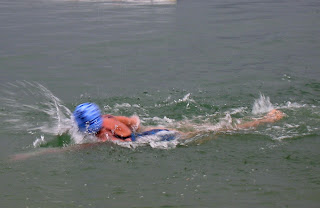 So, to prepare for the first (likely full) wetsuit swim in two weeks (California 70.3 in Oceanside), I have officially been IN the Zenith twice this week. The first time was kind of a cheater way to do it, but if you are without an open water training option, a good thing to do. I simply took it to the UT Masters Swim workout and I used it for the 1000 yd warmup, then I took it off (and when I did so, hot water came flooding out of the suit! the water temp was probably just under 80F). But, it at least got me in it and reminded me of how it felt to swim in it. Another advantage to practicing in the suit a few times before a race is that you will fatigue differently… not significantly MORE, just differently, than swimming without it. You may notice a bit more fatigue in your shoulders, since you swim stroke will be slightly altered. Today was the biggie though, I am embarassed to say, I have rarely ever practiced for a cold water race by training in my wetsuit prior. Stupid, I know, but at least I am being honest with you. 🙂 Today I took to the Pure Austin Quarry, which is probably one of the most amazing open water swim venues you could find. This is a quarry that has buoys around it marking off approximately a 750-meter loop. Right now, the water is a chilling 59-F. But it was a beautiful day, sun was shining and despite the brisk air temp of the low 60’s, I sucked it up and ventured on down there. I think that from the time I put on the suit to the time my entire body hit the water was at least 15 minutes; you know, mental preparation… But once I got in, it actually felt pretty good. My goal was to swim at least 3000 meters in this, and I was such the over-achiever that I did just about 4000. Despite the numb feet and hands, I did warm up about 45 minutes later, and the reward for the swim was a 20 min bask in the sun on the deck, with noone around, in complete solitude. It was actually an invigorating little swim!

Moral of the story… Do What Scares You! I know that I will be a bit intimidated the day before California 70.3 and well, I don’t even want to think yet about Ironman Coeur d’Alene in June, but the only way to tackle the fear and have any hope of getting over it is to get out there and do it. Make the best with the situation you have, we are so lucky to have this facility in Austin but if you do not have it, throw on the suit and swim in it a few times; even if you only do the warmup. It is often times the mental edge you will need on race day, simply knowing that you have faced the fear a few times prior to your day of competition. And it is empowering to do these things, especially on your own,
Happy Swimming! 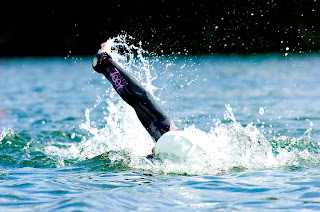