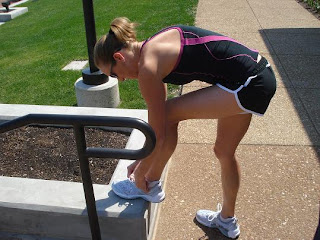 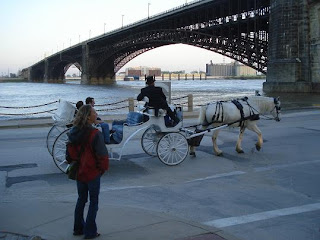 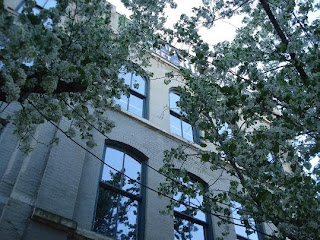 The trees were in amazing bloom; this is taken at dinner Saturday night, looking up from our table 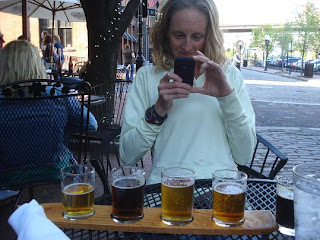 And of course, I had to have a beer sampler at Morgan Street Brewery 🙂

It was quite a bit closer than last September in Augusta, but again, I was out-kicked this weekend in the “Go! St. Louis Half Marathon”. As painful as the 1-second differential is (as was evidenced by my choice of words at the finish line, said to myself of course) I really have absolutely nothing to be disappointed about from the weekends event. 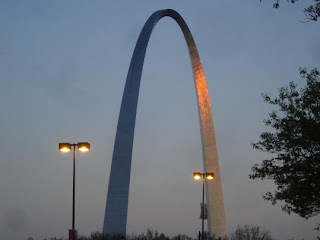 This is a race which I have done the past two years, and both times I have been lucky to come out on top; in 2008, I won with a 1:20 and in 2009, I (somehow!) won with a mediocre 1:23. I was not going to do this as my original plan was New Orleans 70.3 on April 18th then Lonestar on April 25th, but I figured the one weekend ‘off’ would be good for me and I just really love this event. I think it is my mid-western roots that keep pulling me back, combined with the fact that I can coerce my parents into driving down from southern Indiana to hang out with me for the weekend; is always a double whammy when you can wrap a visit with family or friends into a race trip.

I flew in on Saturday morning, met my dad at the airport (as my mom was in Florida) and we got all the little things done upon arrival: packet pickup at Chaifetz Arena, a short 20 min ‘shake the legs out’ run, lunch at Subway and then relaxing at the hotel by about 2:00. St. Louis is a pretty cool town, as it has a nice infrastructure – many old buildings and nice wide roads yet despite being an older town, you can tell that they have done a lot to keep it current and worked to keep the city in good shape. My dad is typically extremely antsy the day before a race with me, as he cannot possibly sit in a hotel room on a beautiful Saturday afternoon (which is all I can and should do!) but he was quite content relaxing as he had stubbed his toe on an uneven sidewalk that day and was walking with a bit of a limp. He, of course, is where I get my lack of coordination. Luckily, his foot was alright for spectating on Sunday. We had a nice dinner at Morgan Street Brewery, splitting a BBQ chicken pizza and a little beer sampler. While I wanted to race well, I was really taking this race in a relaxed mode, knowing that I have a bigger event in a couple of weeks. I love to race, but I hate the nerves, so this was a nice weekend of getting to race without putting too much pressure on myself.

Sunday was a bright and early 7 am start to weather that could not be better: sunny and low 50’s. I warmed up in my cushy Zoot Kapilani’s (they feel like slippers! very fast slippers) and I have to admit, my quads felt heavy and I felt kind of sluggish! Ah, no big deal as that is fairly common before a race. I glanced around me at the start line and thought “Hmm… some of these ladies look like very fast runners…” and hoped I was not going to get it handed to me too badly today. I realized that with $1000 for first place this event could very well pull out some speedy runners. I tried to push that thought out of my mind and focus on my race. 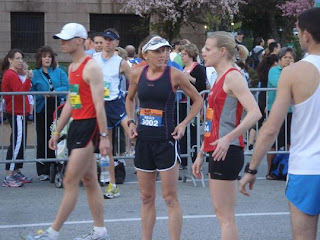 We were off right at 7:00, and I have to say, two other women were ‘off’ MUCH faster than I! I came through Mile 1 in a 5:40, which was a bit too fast for my taste, but they were already out of sight! What?! I again tried to push those thoughts like “this could be a very long and frustrating day” out of my head. We trotted towards the Arch, then to and through the Anheuser-Busch building. The smell of hops is not quite as enticing at 7 am. I felt very controlled, but of course a little annoyed to be sitting in a distant third place at Mile 6. The spectators were awesome, but every time I heard “third woman!” I thought “that’s not a good thing, people!” 🙂 I was right under 6-min pace, and I decided about halfway through that the goal today was a personal best time (1:18.30 was the current). I could not control who had shown up, and for all I knew, maybe these chicks were going after the record of 1:14. I took my green apple PowerGel at mile 9, and kept on trucking, feeling very strong on the uphills and cruising the descents. As I approached mile 10, I saw the clock at 59:45. Upon quick calculation, I figured that to be a 1:17.45, I needed an 18 min flat last 5k. That would be tough, but I was up for the challenge. If I was the defending champion and I was going to be 3rd today, I might as well PR!I began to drop the hammer on myself at mile 10. At Mile 11, I unexpectedly caught the 2nd place woman. I then realized that first place was just up the road, not 50 meters up. What? How could this be? I decided maybe I would repeat as champion and PR to make it a stellar day! I pushed hard to catch her, as I knew time was running out. Right at Mile 12, I caught her. OK people, help me out here.

My thinking was that if I passed her just a bit, and took the lead, it would mentally wear her down a bit. Hear me out: If you are winning for 12 miles, and someone passes you with 1 mile to go, wouldn’t it make it hard?! Or so I thought. I held the lead just barely until about 400 meters to go and decided I needed to finalize this. So, I dropped what little hammer I had left, gapped her by maybe 20 meters and thought “Sweet!” Yeah, not so fast Kelly. I ever so slightly relaxed, and suddenly she had one more burst about 10 meters from the finish (insert choice words on my part). I was done. My legs would simply not go any harder, so unfortunately, I had to settle for 2nd… her 1:17.23 to my 1:17.24. That stings. Live and learn. 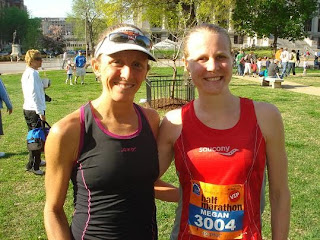 I gave myself about 5 minutes to be angry, at which point I realized that this was an absolutely stellar race and had she not of been there, and had she not of taken off from the gun giving me the unseen carrot to catch, then I would not have walked away with a 1+ minute best time today. It sucks to be second, especially by a second (which will not happen again!) but in the bigger picture, it was easily my best running race of my life. I had a great weekend with my dad (who drove 8 hours to get a good show, thank goodness!), I got to return to a city and a race that I thoroughly enjoy and I pushed myself to a limit which I have not found in the past. The entire race felt strong, and I know without a doubt that I left it all on the course. Tactically? Well, I still do not have that whole sprint finish thing down quite yet, but I am learning it whether I like it or not. 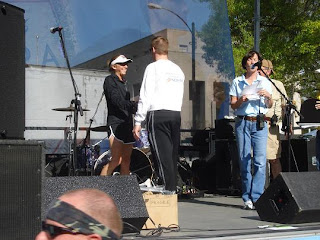 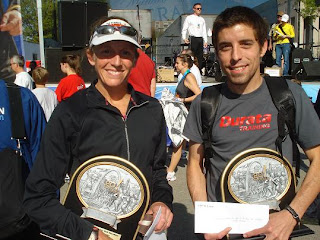 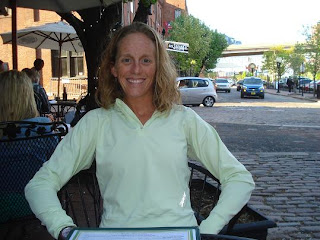 My dad and I went back to the hotel, got some lunch and meandered back to get the car for him to take me to the airport. As the race was still fresh in my mind and I was still kicking myself a little bit for the lack of finish line tactics, I looked around me at the incredible day around me, the many marathoners and half-marathoners and their proud families and friends and realized that the finish time, the PR, or the place really is just the icing on the cake. We do our best to prepare adequately, and control what we can control, but once the gun goes off, all that is left to do is race to the best of our abilities. This race was a true lesson in ‘running your OWN race‘. I did not panic when those girls took off. Though I did get a bit angry, I knew I had to race within myself and if I was not going to win, I would at least go for a best time. So despite being so close to making up a lot of time and almost coming out on top, I honestly have nothing to be upset about and a lot to be thankful for. Next up is Lonestar 70.3 in two weeks, which will also be our first trip to Galveston. Thanks for stopping by!

4 replies on “St. Louis Half: Second by a second…”

Now THAT was a true race! Nice job and a great PR.

Kelly, I really enjoyed reading your account of the race–I feel as if I was there! Wish I had been at the race to cheer you on! You are a great writer and an amazing athlete!! But you are an even more amazing daughter-in-law–no “seconds” there!! much love, Donna

congrats on the race!! the st. louis half was my first half marathon and reading your post gets me even more excited to train for another one and do better next time! thanks for the recap and good luck on your next one 🙂

Wow…congrats on an amazing race! You did awesome! I wish I was as fast as you! 🙂