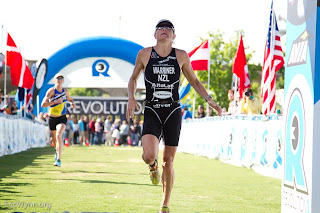 So…it’s official, I need to work on my sprints. Yep; that is me, above, in 3rd. Not 2nd. Maybe I’ll take to the track after this race write up and bang out something like 10×200’s. I blame it on my swimming background. I happened to qualify for State Meet when I was young in about every event EXCEPT the 50-free. It’s not my fault, it’s in my genes! Nonetheless, despite the 2-second differential between myself and 2nd place (me being on the ‘losing’ end), I am extremely pleased with the 3rd place at Rev 3 Tri Knoxville from the weekend.
I went into this event excited that it would be over with in 2+ hours, and also very relaxed as my focus is on Ironman Coeur d’Alene in June. I love to race, so I was ready to see what my body would give me for a short 2-hour event, but I was also realistic in that my training has been focused around something much longer. I flew into Birmingham, Alabama on Friday, where my good friend Laura picked me up and we headed 4 hours north towards Knoxville. However we made a quick detour to the Quintana Roo headquarters Chattanooga, TN where I was able to meet much of the awesome crew there, including Brad DeVaney, the man behind the magic (designer of the new CD0.1). Not only have they created an amazing bike, but the people behind the scenes are just good people. It was very cool to see where the bike started, how it evolved and became what it is now; which is a kickass machine! 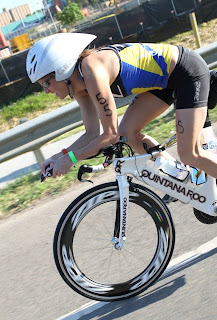 Saturday found myself abnormally tired, waking up late and only getting in a 30 minute ride that morning; I just nixed my typical 15 minute run. Sometimes you just have to listen to your body and go with what it is telling you. I spent the day getting my bike dialed in with Tres from QR, doing a brief interview with Mike at BeginnerTriathlete.com (expect to see a review of the CD0.1 on their site soon), pro meeting and enjoying dinner with Laura and Derick’s parents who drove in from South Carolina. With family and friend support for Sunday’s race, the pressure was on to give them all a good show. “Check” on that one! 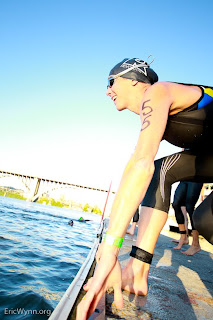 As you have likely heard from others, Sunday morning was COLD; especially coming from Austin where the previous week had greeted us with many 95-degree days. It was probably in the upper 40’s or low 50’s, but a beautiful morning. With a 7:50 AM start, I was not complaining; it was cool but the sun was shining. We had a non-wetsuit swim, which you’ll rarely find me complaining about, and it was not so much the 69-degree water but the air which made things tough. We took off promptly at 7:50-something, made our way down the Tennessee River into the sun and then headed back towards the exit. Swim was nice, nothing too exciting, and I found myself exiting with friend and fellow American Dede Griesbauer. I had a pretty entertaining transition, exiting with my shoes in my bike and one shoe popping off; a nice man handed it to me, so I put it in my mouth and ran my bike to the mount line, at which point I put the left shoe on and then hopped onto my bike, fiddling into the shoe which had not come off; and slightly laughing at myself. Let’s just not acknowledge that this mishap definitely took an extra 2-seconds…moving onto the bike. 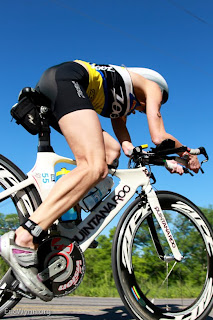 This course was beautiful! Winding, hilly, cold, and gorgeous. It was quite challenging to get any water, but I managed to drink almost one bottle and also get down two PowerGels on the 25-mile course. I held my position, and found myself leap-frogging with Dede and also Sam Warriner. I had very numb hands and feet, but I have had this before; you just have to be very careful and cognizant of your handling skills in this situation. I powered up the hills loving every minute of it and hung on for dear life on the fast descents and winding turns. Before I knew it, we were back at transition and I exited the bike in 7th place or so; and only 30+ minutes to make it up!

I fumbled to get my Zoot TT2.0’s on, yet I was probably not the only one, as my hands would not work too well. I finally go them on and took off… charging hard to catch some women! It felt GREAT! Amazing the difference in your legs from 25 vs. 56 miles of cycling. I ran myself into 3rd place by about mile 4 (at which point I then realized I did have feet underneath me), which honestly kind of surprised me when I heard “40-seconds from 2nd” from some friends. Yikes! If I could keep this up, I’d be at least top 3 or even 2nd. I kept pushing hard, and finally saw Sam Warriner up there at about mile 5. I could tell I was closing on her, but it was slowly. And I was working HARD! We came through transition with about 1/2 mile to go, and I was able to run even with her. She jostled for position, trying to keep me behind her. This is why I was no good at ITU racing; this irritated me. For most, it would fire them up. I felt strong up a slight hill and was able to pass her without too much added effort, and we were then within about 400 meters of the finish. I SHOULD have put in a big surge here knowing that I lack a final kick, and tried to gap her. However I didn’t, and she put that surge in with less than 200 meters to go, gapping me, and I did not have a response. Of course I was a bit frustrated, but I knew that she would be tough at the end. We cruised into the finish, and I was, yes, … 2-seconds behind her. However, I came to find out that I had put in a 35:26 10K effort, which I believe is the fastest I have ever run for the distance. So, I am not disappointed in the finish, though I will say that it is OFFICIAL: I CANNOT SPRINT! But hey, at least I can make the finish exciting! Fellow ladies, do not fret: if you are in a sprint finish with me, you’ll probably win it. 🙂 Of course, I’ll try my hardest not to let that happen.

Having come here not expecting too much, I was very pleased with 3rd and I cannot say enough about how awesome this event was. Heather and her crew with Rev 3 Tri had an amazing setup. It was spectator friendly, they scouted out a beautiful and challenging course, and made this so easy on the competitors in terms of logistics. They have done great things with this young series, and I am stoked to see what Quassy holds in store in just 4 short weeks. If you have the chance, check out the Rev 3 Tri series! You will not be disappointed; and if you have friends or family attending, there will be plenty of action for them as well outside of the event. Congrats to all of those out there who raced and thanks to all of the fellow pro women for making it an awesome event. The entire layout from transition to the finish line area made it feel like a little ‘community’, as I saw may of the same people both Saturday and Sunday; from the guy with the Woodle dog, to fellow professional and friend Jessica Jacobs and her husband and daughter with their pup decked out in a Sport Beans jersey… by far the cutest dog in attendance.

I have opted to not race for a few weeks, which is very hard for me, but to stay put in Austin and focus on preparations for June. The down time will be good, the volume will be big and I hope I survive. But I am excited at the challenge and I am extremely pleased with how the first few season races have gone thus far. Life is good, I feel extremely lucky to be able to do this and I am loving every minute of it. Derick and I decided that after every ‘good’ race I have, we need to go and have tex–mex and margaritas to celebrate. That said, I must go and get my swim done as the margaritas will taste a bit better after that. Thanks for stopping by and see you out there!