Whew; what a journey it has been. I am still in beautiful Coeur d’Alene, at the coffee shop that Derick and I have eaten lunch at now I believe approximately four times. We head back to Austin tomorrow, and the past week here has been incredible. I am not really sure I have fully ‘digested’ that my first Ironman has come and gone, but I will try to put the thoughts out on paper as best as I can only two days post.

I came into this event still a ‘newbie’ at this distance, which is interesting because I am anything BUT a newbie to this sport. I started in 2001 and I turned pro in 2002. I knew I did not want to tackle an Ironman until I felt I could do WELL; I attempted this last year in Canada, but I dealt with some unforseen circumstances and was unable to finish (I stepped up to the start line knowing I would probably not finish). So, all things considered, this was truly the first one I knew I was ready and prepared for. I told a friend in transition race morning, as we walked to the swim start, “What a perfect day; we could not ask for any better conditions. I know now that if anything goes wrong, it is all my fault; nothing else to blame!” I like this kind of situation; I like holding myself accountable.
The days leading into Sunday were perfect; incredible ‘homestay’ with Sherry Brietenbach, who lives up in Hayden Lake right off the bike course. We arrived early, settled in, and I felt ready to go by Thursday. Probably the hardest thing was containing my energy and excitement until Sunday. I felt a strong sense of peace, and ease, even through Sunday morning. There were a few flutters of nerves, but I was moreso just ready to see what I was capable of and finally DO this thing that I had set out to do a year ago.

We arrived to the venue early, and I headed down to the lake with enough time to hop in and swim a few strokes; not much, but I knew that my Zoot Zenith wetsuit felt perfect in these conditions. I actually love ‘cool’ water so the temperature could not have been better; low 60’s I heard. In the minutes before the gun went off, I made sure to find a few friends, give them a hug and wish them the best; we were all in for a long day, and I think it helps to relax by remembering this and knowing that essentially we are all ‘in this thing together.’ 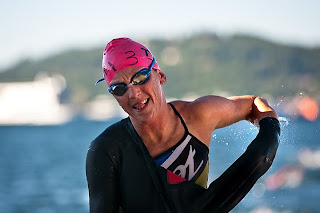 Right at 6:25 AM, we were off! I felt a mild panic at the start. I think this could have been that it was a bit crowded, but I think that a small wave of nerves hit me and I thought “This is it! How awesome!” I still felt a bit boxed in, so I swam far to the right and found some clean water. I am sure I took a slightly longer line to the first turn buoy than needed, but I felt comfortable and for me, that is very important with the swim; feeling like I can find my own rhythm and stroke. I exited the first loop with Hillary Biscay, and we headed out for #2 together. She was a great swim partner, as I believe she led the first loop and I led most of the second. The chop was a bit worse than it appeared from the beach, but I tried to relax, enjoy it and realize that this portion was far shorter than what was to come; the body would not feel this light (or cool) for many more hours!

We came out, the awesome volunteers did their job well and tore that wetsuit off of me and it was onto T1. I was out on the bike and spent a little bit of time (we are talking maybe a few minutes) in first, which was fun. I knew that would not last long. 🙂 I was passed by a couple of women within the first 5-10 miles, but I tried to ‘let them go’. My biggest goal on the bike was to RIDE WITHIN MYSELF. I knew that women would pass me, and I had to be alright with this. I cruised along, started to push the nutrition (MANY PowerGels fueled me along; I probably took 15 gels and two bottles of PowerBar Endurance on the bike) and tried to keep myself controlled with my pacing, using my SRM to keep me controlled. It was tough to get to the upper part of the course and ‘not push the hills’, as this is what is my strength. I let the ladies come and go, many of them before the first loop completed, coming back through town still feeling great at miles 60-70. My Quintana Roo CD0.1 did not fail me, as I felt incredible in the TT position and just as good on the climbs. I cannot express enough how much that bike feels to have been made for me. Nothing ever ‘unraveled’ physically, but I did notice the hills were much harder by about mile 90, and the last 12 miles coming back into town I could feel my power start to fall off. I also intentionally decreased my intensity a bit here, knowing I had 26.2 miles to run soon and I needed my running legs. While I completed the bike in 5:27, a few minutes faster than ‘planned’, I think that I really nailed it in terms of perceived exertion. Now I had to only hope that I had it in me to run well. The unknown was a bit daunting, but I tried to not think too far ahead.

Into T2, I threw on my Zoot Kapilani’s (they have laces, but they have been great for open half marathons so I decided to use them for this full; they feel like slippers!), PowerBar visor, gel flasks, and was off. Haley Cooper was out of transition just ahead of me and started off with a strong pace. My plan for the run was as follows: If you see sub-7 min for the first mile, dial it back. I did not catch the FIRST mile split due to the markers, but I did catch the second mile split: 5:58. That could not have been correct; maybe I was out of it, but I immediately said “EASY KILLER!” I substantially dialed back my intensity, let Haley go and settled into a rhythm. I was seeing between 7:00 and 7:30’s for most of the first half of the run. The big surprise here was, it did NOT FEEL GOOD. 🙂 I am blessed that almost every time I race a half, it just feels great! I knew this could happen, and I told myself it was alright; to simply keep moving, keep fueling and keep looking ahead. Once I completed the first loop, I was hurting. I found myself walking twice. They were short bouts, but I did walk around the 13 or 14 mile mark. I said to myself, “Kelly if you walk, it will take a hell of a lot longer than if you keep running.” That got me going. I wanted this to be OVER WITH! 🙂 I kicked it back up a notch and kept running, and somehow, my body came back around at mile 18 or 19 and I started to feel almost ‘good’ again. I did not think this was possible in an Ironman! I could see the lead women quite a bit ahead, but I did not even think about it. I told myself “This is YOUR journey. You are in 4th place right now. You can be sub-10 hrs if you just keep moving.” Amazingly enough, I started hearing people saying that Haley was just 50 meters ahead. I did NOT alter my pace, knowing I did not want to risk blowing up. I kept it steady and passed her at about mile 22, offering her a few words of encouragement, and kept plugging along. I pushed in another PowerGel, and not until I saw Mile 25 did I start to pick it up. I figured after this long and so many hard training days, I could kill myself for one mile and still finish. 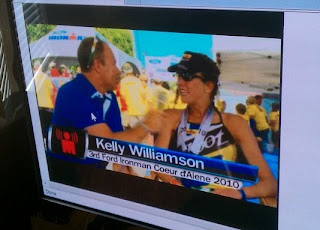 I finally saw Sherman Avenue, and I have never been so happy to see the finish up ahead. With my history of being out sprinted, I kept on the pace, and with about 200 meters to go, took a look over my shoulder; seeing an empty stretch of road was a huge relief. I smiled and thanked the lead cyclist, when he peeled of and I began to celebrate. WHAT A FEELING! Top three and a 9-something (I did not even know exactly what) for the first one! I enjoyed it, gave out some high 5’s, and cruised my way into the finish.

After finishing, my first thought was, “I don’t want to do that again for a long while.” Then I was pulled off by the amazing Lisa Bentley and Greg Welch for an interview, and by USAADA for drug testing, to which I replied “I’d love to be drug tested.” It is tough to explain exactly how I was feeling; mostly shock that I was able to recover from such a rough patch on the run to recover and still have a very respectable finish.

A few thoughts from this crazy experience:

Also a huge congrats to Andy Potts and Linsey Corbin on their stellar performances and first Ironman wins. Both are truly nice people and very deserving of their success. Congrats to Meredith Kessler, first year pro and 2nd here, and Haley Cooper who made me work damn hard for that third place finish! I love the stiff competition as it forces us to bring out the best in ourselves. I hope that I can be a lesson in that anything is possible with loads of hard work and a never-say-die attitude. This is an incredible journey, and I frequently have to stop and think about how lucky I am to be able to do this. Thank you for the kind notes, it really means a lot to me to hear the support from each one of you. Now is time to rest, reflect and refocus for another one of these beasts of a race in October.

Thanks for stopping by!
~Kelly

GREAT post and huge congrats Kelly! I think all that patience in waiting to do IM distance really paid off because it sounds like your race strategy was perfect! I'm learning that running your own race is the hardest part of ironman. It was so much fun tracking you, really, you ROCK!! now enjoy this huge accomplishment with a little down time!! CONGRATS superstar!

You are having a monster year! Congrats on yet another fantastic race and a very impressive race at IMCdA. Thanks for sharing your insights and experience of Sunday's race and yay for no sprint finishes!

You are the most amazing girl! So proud of you little lady. I love the swim picture by the way 🙂

Congrats, Kelly, and thank you for sharing your experience! You endlessly inspire me!! I am so happy for you, and know you've always had this within you. Now it's time to celebrate your performance with a bottomless pitcher of margaritas:) That's what all this hard work is for, right? I can't wait to see it all unfold in Kona!

Kelly, I'd heard about your success but reading the narrative gives me chills! You are amazing! What a wonderful story! Congrats (belatedly!) on your success. awesome job, so inspiring!!