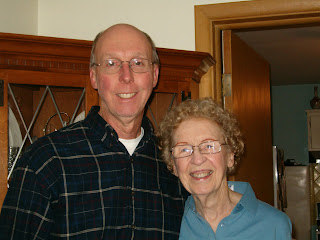 Last night, my grandmother of 96 years passed away. This is “Grandma Handel”, to me. She lived a long and very full life. She lived in Columbus, Ohio, so unfortunately I was unable to see her as much as I would have liked regularly. I did however see her over Christmas, as she had moved into Knightsbridge Forum; an ‘assisted living’ place but she did have the freedom of her own apartment. It is very hard to realize that she is ‘gone’. I find myself alternating between overwhelming sadness, and then happiness at the life she was able to live. She moved out of her own house only one year ago. She out-lived my grandfather by about 20 years. He was an incredible man himself, as he taught her (and my father) how to camp, even writing a book on ‘cooking in the outdoors’. So, she was living on her own in her own house (probably 1500-2000 sq feet of house, with a basement she used to do her laundry and wrap gifts) through age 95. How many people will ever get to do this? That in and of itself is incredible. It was hard for her to move out of 3122 Glenrich Parkway, but I think she knew that it was time for her to simplify her life a bit. 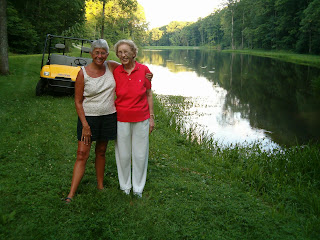 She loved a few things, some of which included her family, giving gifts (she had Christmas gifts wrapped by June each year!), Ohio State football, lunches with her lady friends, crossword puzzles in the mornings. She rarely skipped a day without her 3:00 ‘highball’, a simple glass of whiskey (usually Kentucky Tavern). I am tempted to say this is what helped her live her 96-years. 🙂 Grandma was always up for a visit from us, though I only wish I could have done so more often. Life can be tough; we do the best we can, but ultimately we have to ‘live our lives’ and she was nothing but supportive of what I have chosen to do with mine.

I spoke with her just 2 weeks ago, upon our arrival in Coeur d’Alene. She called me after receiving a card in the mail, and after her highball, which made her quite chatty. While she was a bit short of breath, she was animated as ever. Her mind quick as a whip. My mother told her last weekend of how I performed, telling her that I ‘qualified to race in Hawaii’. Her response? She lit up, smiled and said “Ooh, that’s the big one!” How she knew this, well I can only say it is because she is Amazing Grandma and she just ‘gets it’. 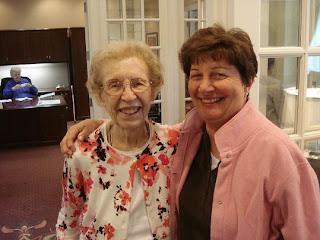 Grandma Handel even picked up emailing the past few years, keeping up with the times. She had a ‘mail station’ which she used to open up and correspond with people via email. She made friends easily and in her 20 years living alone, had her fair share of boyfriends. She would tell you of how a few wanted to marry her. She’d kind of giggle and make light of how she was ‘outliving them all’~! When we visited her house even last year, the light in her living room would automatically go out at 10:00 PM. This was when it was “time for Doc to go home.” (Doc being one of her past boyfriends). 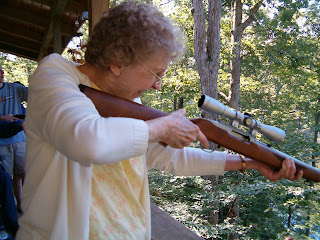 I will miss her dearly. Just writing these thoughts down hurts. There is no way around it, dying sucks. I know it is a cycle and I should be thankful for her time here with us, but when Grandma has always been here and always been so quick and smart, it is incredibly tough to try to imagine moving forward without her. That said, I can only hope to remember all the amazing times we had with her, and carry on with the so many things that she taught me. Grandma knew how to take care of herself; while she was fiercely independent, she loved deeply. She was a beautiful person inside and out, and not surprisingly, I think she just got tired. We will all miss you Grandma, and you will live forever in my heart. 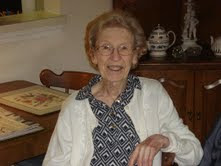 She sounds like such and amazing person! You were so lucky to have her in your life.

Great write up on your Grandmother….she sounded like the most amazing person…full of spirit and wisdom..

That was beautiful and so touching.. It opened my floodgates, too. She will be missed dearly (i already miss her) but will live on in our hearts forever.

oh girl, I'm so sorry. hang in there and let the memories comfort you. what an amazing person and what an amazing life she lived. thanks for the beautiful post about her, very inspiring about how to live life 🙂

That post choked me up a bit. It sounds like you and your grandmother had a truly special relationship. Dying sucks, you're right. I'm really sorry that you're having to deal with losing such a wonderful woman.

No doubt about it… Your gram was DA BOMB. Thanks for sharing a special part of your family!! Hope all is well and you are enjoying the summer. Wait…. In Austin, it's ALWAYS summer!!!!! 🙂

Just seeing this, Kelly! What a good, full life she led. I love your anecdotes–they give such a sense of who she was as a person, and she sounds like she was amazing! I hope I'm that full of humor and life if I'm fortunate enough to live that long!!!

What a good model for aging!!!

I'm sorry to hear of her death. Your memories are so lovely. xo