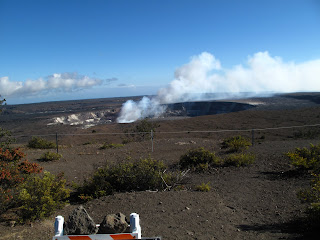 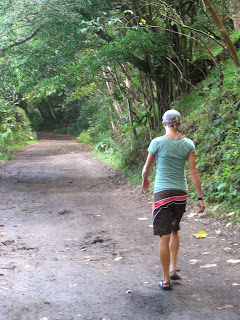 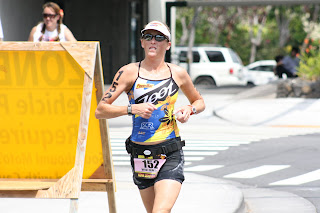 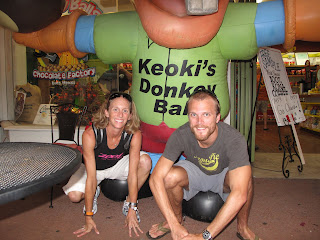 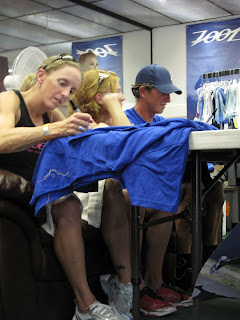 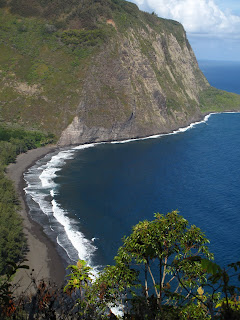 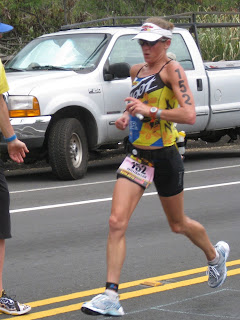 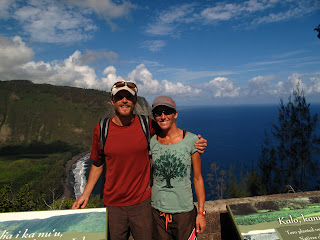 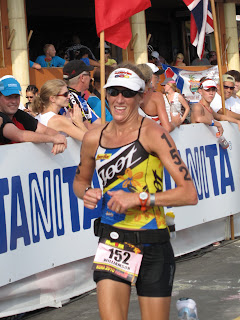 At the start of 2010, I did not ‘expect’ to qualify for Hawaii. I believed that I was capable of doing so, but as with anything, the Ironman distance was still an unknown to me, and I have immense respect for the distance. I was fortunate to put together a race in Coeur d’Alene, and a bit to my surprise, secure a slot for Hawaii. I could not possibly turn this down, so taking my slot, I began to prepare back in June for the World Championships.

Going into Ironman Hawaii, I maintained a low profile, and while I wanted to be familiar with the course, I also wanted to keep a rookie attitude about the event…mostly to alleviate nerves and pressures, which I put on myself. Everyone likes to talk of how you must know the course, how brutal it is; I tried to simply look at it as another race, every one of which is challenging in its own way.

I arrived to the big island about a week in advance, to adjust to the time change, the weather and become somewhat familiar with what I was in for. My nerves were completely in check, almost too much, up through the Thursday before the event, when suddenly the entire vibe of Ali’i Drive just felt like nervous energy; a rubber band wound tight waiting to snap. Saturday could not come soon enough. I kept telling myself, “It’s just another race; focus on execution, nutrition, pacing and staying mentally strong.” While I know this to be true, I had big expectations even for my first time there; I wanted to be in the Top 10.

Race morning, I arrived in plenty of time to get set up, and I then went to the waters edge to relax. I entered the water at about 6:05 for the 6:30 start, and looked back at the seawall; there was already a solid line of people building up, waiting to take in the swim start. I had to smile at the sight. I entered the water and swam around a bit to shake off the nerves. We waded out for the deep water start at about 6:20, and I mentally prepared for the journey the day had in store; good or bad, I was excited to have the opportunity and I did a quick gut check to remember to (try to) truly enjoy my day.

With a field of ~120 men and women, I opted to start wide left to avoid a position whereby I may get pummeled. In hindsight, I played the swim start too safe, and I completely missed the top group of women. I found myself taking an extremely long line in to the buoys, and I know I was swimming far longer than I needed to; but I wanted to avoid any chance of panic. By the time we hit the turn boat, I had found a small group of men and women and we headed back in. I started feeling stronger, more relaxed, and with the cleaner, calm water I ended up pulling this group most the way back in! I thought I was on track for a great swim, perhaps low-50 minute range; but I exited and saw “57” on my watch. I quickly said something like “Kelly what the hell were you doing out there, looking for turtles?!” and then tried to get over it. I ran to my bike, taking in some PowerBar gel blasts on the way, and hopped on the CD0.1, ready to settle in for a nice 112 mile pedal.

As I biked out and back the Kuakini Highway (about a 10 mile stretch), I noticed so many women up ahead of me who I had beaten out of the water numerous times! Again, no use in dwelling on it, I focused on finding my rhythm on the bike, letting the heart rate settle down and riding within myself. My plan for the bike was to bike strong yet very controlled, as I wanted to run better than I did in Coeur d’Alene. I also wanted to front load my nutrition, so that if the winds were bad in Hawi (the turnaround), I would be able to keep my hands on my bars and ride, without fear of bonking. I took in Powergels regularly, along with PowerBar Endurance drink; passing a few women, and getting passed by some. I felt stronger than expected, and I ended up pushing the bike slightly harder than I had planned. The most exciting part of the bike was getting blown OFF my bike coming back from Hawi. It was minor, going up a small hill at a slow speed, and I was proud of myself for a quick recovery! I banged my knee on the frame a bit, but no damage was done.

The bike passed quicker than expected, and I still felt strong coming back into town, which is a huge step forward for me. However, getting off the bike and running into T2, my legs felt shaky. I threw on my Jack & Adams visor, Zoot Kapilani’s, grabbed my gel flasks and was off for the final leg of the journey, and what I hoped would be the best part.

The first 10 miles (down and back on Ali’i Drive), I felt very rough. I saw so many people cheering, and I checked some mile splits, which were in the 7:00-7:30 range; but it felt so challenging. I knew there were women out there running faster, but I tried to remember another piece of advice… “There will be so much carnage the last 10k of the run.” I did not want to BE the carnage, but I wanted to eat up the carnage! When I hit the 10 mile mark, I was told by Chris McCrary, as he could tell I was not feeling great, “Kelly, it will get better. Just keep going, it’ll get better.” I heard this and I believed it. There are countless ups and downs on the marathon, and you have to push through the downs yet not get too excited on the ups. It is all about a ‘controlled hard’. I had been told by Derick I was in the Top 20, and I knew I wanted to be closer to Top 10; but I did not panic, I just kept running. By the time I hit the energy lab, I had started to feel much better and find a smooth stride. I actually exited the infamous energy lab feeling strong, and knew that only 10k to go was nothing after a long season and countless run sessions.

The final 6 miles, I simply gritted my teeth and tried to take off any women up ahead I could. I was passed by one, which made me angry, but again I focused on the road ahead and the sight of the finish line. By the time I hit Palani (which is a short downhill with about 2 miles to go), I started to open it up and increased my pace. I actually got a bit emotional, as I knew that I had conquered the day with all I had and whatever the result, I would be proud at the finish. I finished with a 3:11 run, faster than I had done previously.

I crossed in 15th place, with a 9:36, which was a 3 minute improvement from CDA and absolutely nothing to be upset about for my second Ironman. In hindsight, I sit here thinking… could I have gone harder? Did I have too much left on the run? I know I gave up a few minutes on the swim. But the bottom line is, I executed a smart, controlled yet aggressive race and I think I proved to myself that I do belong among the best racing Ironman; that in itself is a big mental barrier to get past. Another interesting part about my day was that I GAINED 4 lbs! I went to medical, they plopped me down on the scale and when they told me my weight, I said, “I am ok…that is up 4 pounds!”

I think it is healthy to set out big goals. Whether we do or do not get there, it gives us a purpose, something to focus on and the bigger the goal, the more we’ll get out of ourselves. I firmly believe that I am capable of not only Top 10, but ideally Top 5. That said, I know of the loads of experience and talent among my fellow competitors, and if there is one thing I have learned in my 8 years of racing, it is the value of patience. This season has been incredible, and the support from sponsors, family and friends makes me feel truly blessed to be able to do what I do every day. I can look towards next year with more experience under my belt, and having pushed myself to new limits. Do not be afraid to raise the bar for yourself. There is no failure if you are always learning from what you do; and most importantly, enjoying the journey along the way.

This first Ironman experience was not only about my race, but I was also able to raise $6270 for Multiple Sclerosis, through many generous donors, in honor of my amazing Aunt Sandy, who has had MS since she was 30. The week after my race, she was told by her doctor that he wants to get her out of her brace she has worn for 17 years and try to get her walking again. I gain strength from watching her. It is not about what life hands us, but in how we react to it; which is entirely in our control.

Thank you to my amazing sponsors, friends and family; this journey is all the better with people to share it with! ‘Til the next one, keep looking forward and keep your eyes on the horizon.

Thanks for stopping by,

Awesome race! Great post! Thanks for sharing and being an wonderful inspiration to so many.

You have such a tenacious spirit and grateful heart. I love that one of my favorite professional triathletes has the soul to back up the awesomeness. It was fun tracking you during the race, and I look forward to cheering you on in future races!

You are such an amazing person, Kelly. Racing or not, I know you put your best into everything, and that's why I love you so much 🙂

Congrats on a great race! I've been following you since the Go! St. Louis in April and find you to be inspiring. I ran the Chicago Marathon the same day you did Hawaii and was disappointed in my run. I've decided to do the Indianapolis Monumental Marathon in a few weeks to try and improve my time – hopefully the weather will cooperate. I will keep in mind that there are “countless ups and downs on the marathon, and you have to push through the downs yet not get too excited on the ups. It is all about a ‘controlled hard’”.

Again, congrats on a great race!

Yay! What an INCREDIBLE season and to think it was only your FIRST 2 IRONMAN attempts. One thing I've noticed about your race reports, you race VERY SMART and look how that has paid off!!

You have to be excited about what is in store for 2011. What a nice platform to begin a new year with.

Enjoy your rest, recovery and recharge for 2011!!

such an inspiring race report and I love that you raised so much money for MS! Good luck to Sandy in her journey back to walking, I'm sure she is as inspired by you as you are by her 🙂 you had an amazing rookie pro year and not only do you belong among the top women in the world in ironman, you are already one of the top women in the ironman world!! I know we will see you on the podium one day but for now I hope you celebrate your season with great joy!!! congrats kelly!