As parents of a 2.5 year old Australian Cattle Dog (Amico), we could not deny the little guy the opportunity to do a local doggie dash, only 3 miles from home nonetheless. This is a bit of a delayed update, but I wanted to wait until I got the pictures from Jake North Photography to post it, as the pictures really do the race justice.

It took place back in late October, and it was put on by Jamie & Andrea at Hill Country Running. It was the 2nd Annual Donkey & Doggie Dash 5k. There was a donkey out on the course, hence the “donkey” involvement…very much an Austin kind of event! It was also 2 weeks after Ironman Hawaii, so I figured that while Derick ran the pup, I would blow out my legs and see if they had any speed in them. So, I did the people race, Derick & Amico the people & dog race. 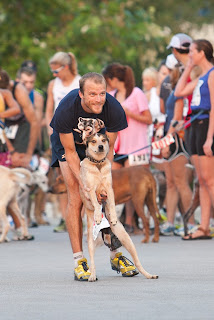 I jogged over to the start (3 miles from our house), while Derick drank coffee and left as late as possible, getting there a few minutes before it started. It should also be noted that in honor of our dog, who looks quite like a coyote or a little fox, he wore his ‘wolf shirt’: 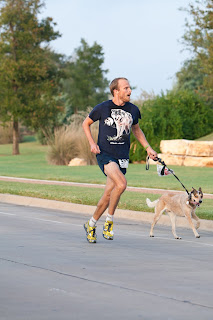 Onto the race. There was a nice little crowd, including Richie Cunningham and his fiance Melissa, and their Whippet Sam Shermingham. Richie had been talking some smack, so we had pumped up Amico a bit prior (not really but it sounds good). Derick, Amico and all the others with dogs lined up in the ‘people with dogs’ corral, while myself and the others lined up in the ‘people only’ corral. We then all anxiously awaited the gun…and off we went. 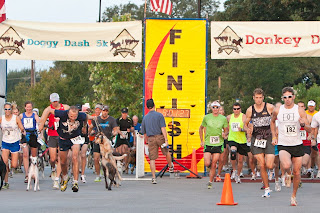 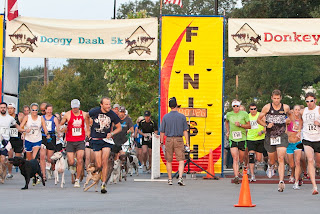 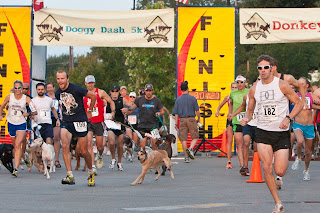 A picture (or a few) really can be worth a thousand words. The start went something like this: Amico bolted, as in we guess his first 400 meters was probably at about 4 min/mile pace, and a few ‘yelps’ were let out in the crowd. I looked over, a bit scared, and the comments I heard around me were “Good lord, what’d you feed that dog this morning?” “Is that a dog or a coyote?” I was between a panic and a laugh, and luckily Amico jumped to the front to get out of the crowd! It was a good sprint for Derick that’s for sure. We finally got out onto the awesome, fast 5k course and this is what it looked like: 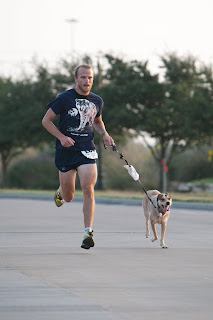 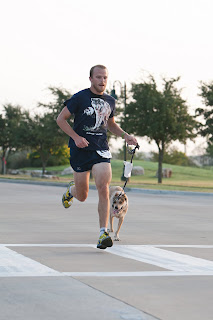 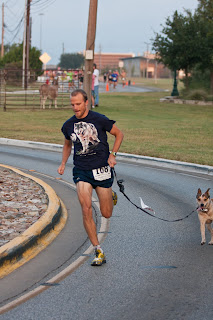 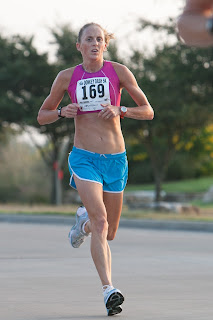 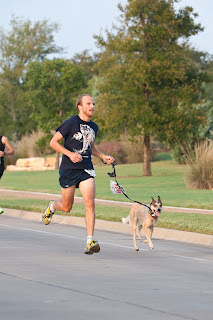 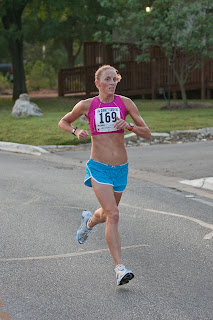 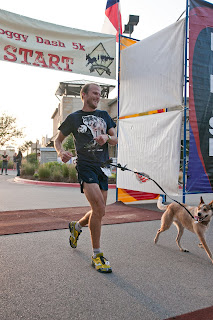 Needless to day, Derick and Amico crossed the line 2nd person/1st person + dog in a blazing 16:20. Shocking! They flew! Which is why I think I was also able to muster a huge PR on the course of 16:57. I was chasing them! The first thing I asked someone was ‘Was that short?’ I usually hate those people; always assuming it was short, or long, etc…a race is a race, you take it! Especially when it is fast! But, Jamie & Andrea did a great job with this event and it was a USATF certified 5K course. Melissa and Sam were not too far behind with an 18:38, as the second people+dog group too (sorry Richie, we took this one!) 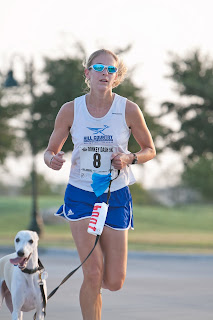 …and in the end, all were happy. Amico got some sweet awards at the awards ceremony, not to mention Derick and I got a free pair of shoes and some cash! Not a bad deal when you only traveled 3 miles to a race! 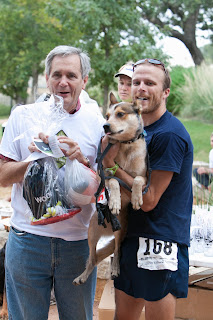 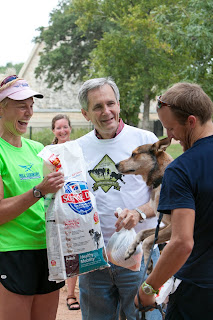 (Amico is not a big eater…the only source of food he gets excited about is either people food or Greenies. The 22# cat on the other hand was very interested in this bag of goods when we got home!)

All’s well that ends well. We had proud parents, happy me for having run fast, and a VERY happy pup because he got to at least attempt to wear himself out! And despite the smack talk between Sam & Amico (or Richie & Derick), all were still friends after the Donkey & Doggie Dash 5K. The End. 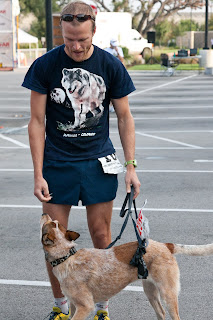 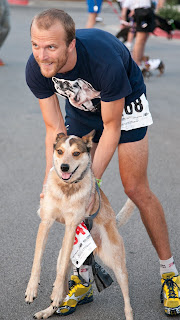 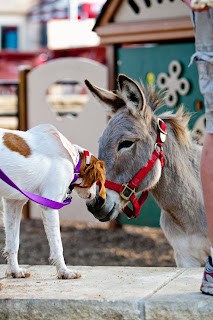 Thanks Jake North for the pictures, Jamie & Andrea at Hill Country Running for putting on an awesome event, Logan Delaware announcer extraordinaire and Austin for being such a damn cool town!!

‘Til next time, thanks for reading…
Kelly 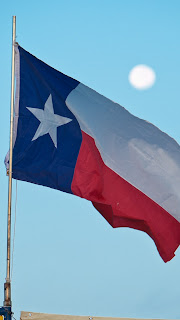 Congrats on an awesome run, Kelly! I can't believe how fast your dog is – that's amazing! He and Derick make a perfect running pair!:)

Ha; Thanks Noelle! It was a really great event. I owe you a call… will call you back this week. I hope you are well!! & warm. 🙂