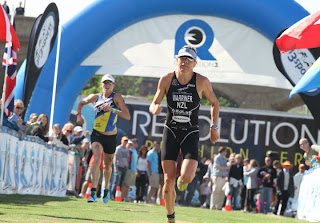 The past few weeks has been a ‘crash training’ plan so to speak for a half marathon in Houston on January 29th. Having taken the month of November and December rather laid back and light in training, I came back from our 3-week Christmas excursion ready to get back at it. I have been given about 3 weeks of time to prepare adequately for this race, or at last ‘as adequately as you can in 21 days’. The process has involved some very quality, focused and challenging run sessions (about 2 per week plus a long run with some speed). Maybe it was the shift that took place last year in training for much longer events, and needing to dig a bit deeper than I ever had before, but I have found myself thinking up ‘mantras’ when the going has gotten tough lately. I often start to think of these sayings or words about mid-way through a tough workout, and I try to simply repeat them as needed. Maybe it’s a distraction from hurting, but they seem to help significantly.

Yesterday, Derick and I were doing mile intervals on the trail here in Austin. After the third one, I said to Derick, “It’s OK to fail on these, right?” To which he responded “Definitely.” Meaning, there are some workouts which should be so challenging that you risk failing. I pushed on, and as I started the fifth one with hurting legs, I began to weigh out failing vs. quitting. I’ve never been one to like to quit. Just the idea of it turns my stomach. The minute I quit, I start to beat myself up for having given up on an opportunity. I would much rather get out and compete, give it what I have, and if I end up last, so be it; at least I know I left it out there. Hearing Derick say that it was OK to fail kind of sounded nice; it meant that putting it all out there and perhaps not being able to finish was still being successful. It almost made me feel good, thinking “quitting is an option, cool.” But, I did not want to go there, if at all possible.

So, it became a game of pushing so hard that I may blow up, but also pacing smart enough that the odds were in my favor of finishing, and finishing with a solid workout under my belt. Finishing having achieved the goals of the workout. I wondered what was better, failing or quitting, and I came to the realization that in any situation, no matter the circumstances, I would much much rather fail than quit. Failing means that you gave it all you had and for some reason, you did not quite get there. The definition of ‘failure’ will certainly be different to everyone, but in some way, you had to settle for less than what you’d of liked. BUT, you can also walk away knowing that you tried, you attempted, and in that, you can hopefully draw some satisfaction and learn from this. Quitting, on the other hand, means you did not give yourself a CHANCE to fail. You dropped out before you risked failing. (Granted there are some situations when quitting IS the smartest thing to do, don’t get me wrong. And as endurance athletes, when we push ourselves to extreme limits, there are certain times when quitting is far smarter than pushing on. This is an entirely different situation). When I looked at the two terms like this, I then decided, I would push so hard that I knew I had left it all out there and if in fact my pace fell off drastically, well then, I knew my limits. I may fail, but I’ll be damned if I quit.

So think about this the next time you are in a training session, or even in a non-sport situation where you have the two options. The task at hand is large, the ability to achieve it may be in question, and trying to achieve it will require most or all of what you’ve got in yourself. I challenge you to risk failure. Quitting is easy, but the repercussions of it are often tough; you will probably not feel good having quit. Failing is not a bad thing; it means you took part, you put your heart and soul into the task and for some reason you came up short. Which is good, because you have likely discovered a new limit, found a new boundary and in the process had some self-reflection which will no doubt make you a much stronger person.

So on that note, get out there and risk failing at something! What you won’t realize at the time is that no matter the outcome, you’ll be better for it in the long run.

4 replies on “Failing vs. Quitting”

ah i love this post!! reminds me of my swim coach. often after giving us a really hard set, he says- “I want you to fail. It's okay to fail. It's not okay to give up.” loved your post & insights on quit vs. fail.

Such a great post. And so true – I learned last season that sometimes I have workouts that I'm meant to “fail” and that's ok. Glad to see others feel the same 🙂

I read this awhile ago and I have to say it pops into my head all the time during painful workouts and it has helped me so much. by recognizing this distinction, I'm less afraid of failing and more determined not to quit!!! AWESOME post.