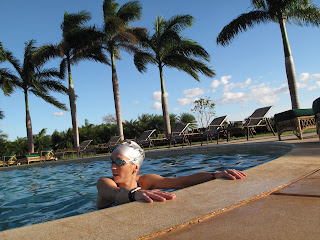 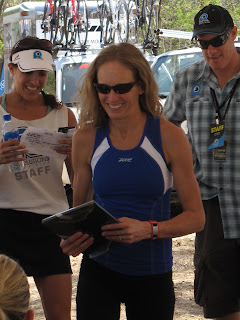 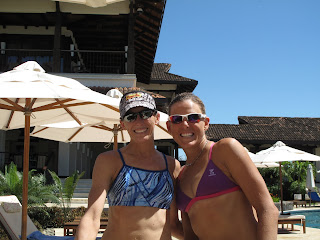 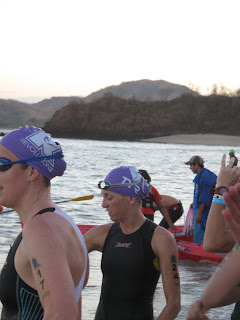 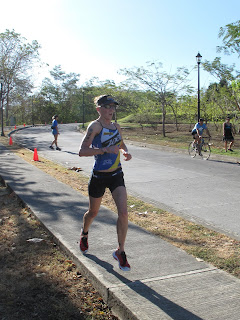 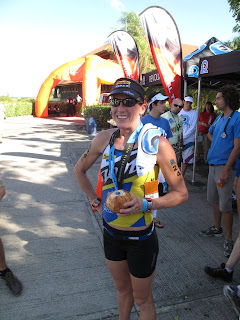 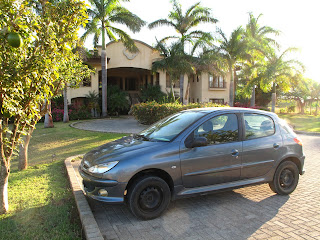 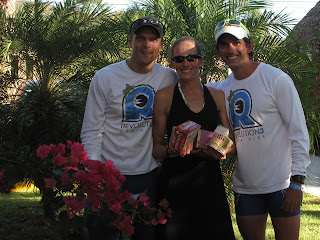 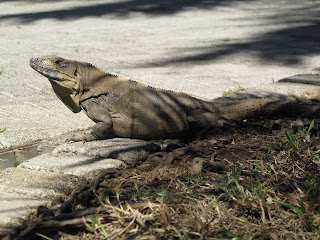 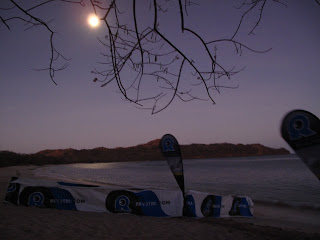 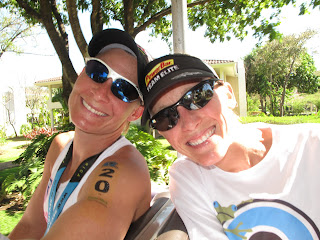 It is quite strange to be doing my first race write up of the 2011 season, seeing that it is only February, but things kicked off early this year with a trip to Costa Rica. I decided last year when this race was announced that it should at the top of my list this year, and when Rev 3 kicked it down from a half to an Olympic distance, I was a bit disappointed. Once Derick (my husband) and I arrived here and I saw how hot, windy and hilly the course was, I was extremely glad it was a shorter race! While it may be a bit tough to get the body to go so fast in February, it was short and sweet and over before I knew it.

We arrived in Liberia on Thursday, which gave us two days to get our bearings down here. The resort where we are staying is beautiful, complete with a huge pool that overlooks the ocean. We had lunch on Friday along the beach at a restaurant with a Tiki hut, and I had to resist the urge to kick back in my bikini under an umbrella with a strawberry daiquiri. Friday we had a pro panel at the race site, along with a short pro briefing, and Saturday was filled with a whole lot of nothing; just the way I like it before a race. One really cool part of being in a foreign country and having to roll with the setup you are given (and many of us staying at the same resort)was that I was able to meet a few fellow professionals who I did not know or had not met before.

Sunday morning felt like an Ironman wake up call, as the alarm sounded at 3:30 AM. Luckily we had rented a car (a Peugeot, nonetheless; FYI, this car fits a Trico bike box in the back seat and multiple bags, though no one would believe me when I said it would! it feels like you are riding in a little coffee bean) and drove over to the race site at about 4:15 for the 6:15 start time. I set up transition and meandered down to the beach, a quick 2 minute walk away. I was not very nervous; maybe a touch, but I tried to keep this race in perspective: It is February, it is an Olympic distance event (and I am training for Ironman), and we’re in Costa Rica. These three reasons alone are reason to take a deep breath and relax when the nerves overtake. And I always remind myself, once the gun goes off, that is the easy part; that is the part I do best, I just do not like the hype and build up before the race. The racing itself is the fun part.

The pro men kicked off right at 6:15 and us women followed at 6:18. A small pack of about 4 of us formed quickly, and headed directly into no mans land. Yes; we were straying extremely far right of the first turn buoy! I kept looking up (as I was on their feet) and thinking “I don’t SEE a red buoy…” but like a herd of sheep, I followed. Finally we did a quick and decisive turn LEFT and viola, there was a red buoy! From the beach, I hear this was pretty entertaining. We definitely did not take the quickest line, but nonetheless, we figured it out. It was a two loop swim and on the second loop, our group of 4 became 3. This time, the line between the two turn buoys the other two women strayed off course again; and I got lucky, staying right on target, and gaining a bit of time. I met up with super swimmer Amanda Stevens at the final turn buoy and she took the lead, as I began to sing to myself “Come on and take a Free Ride, ‘free ride’…” in my head, following in behind her feet. No joke, I really was singing this. We exited out as 1-2 but others were quick to follow, and onto the bike.

We were greeted with a few HUGE HILLS immediately upon exiting transition, that is after riding over a short gravel/dirt/sandy patch that was probably about 200 meters long. I absolutely love to climb and I took this opportunity to try to separate myself from the other women. I was able to move into first on these hills and much to my delight, hold the position through the bike course. For anyone who may consider this race for next year, expect a few big hills exiting the resort, followed by a two loop bike out on the roads outside the resort with a few nice false flats, some good challenging winds, and possibly a cow here or there just to keep you on your toes. Luckily, I did not have to dodge any cows, but they were hanging out right alongside the road to spectate. The bike course was well marked and challenging, just the way I like it!

I descended into T2 and was extremely cautious on these descents, as we hit the gravel patch again, and I went over this at a snails pace. I was stoked to get off the bike after having pretty much trying to trash myself to hold the lead and see if my running legs would be there for me.

I exited out immediately on to sand, which continued for about a half a mile. We ran to another small village, which was so cool as it was only 8:00 AM and there were already locals out there cheering for us! I could see a few ladies not too far back on the run turn around, so I tried to stay on the gas, despite the legs feeling not terribly ‘snappy’. I took in my raspberry PowerGel early (I had taken two on the bike) as I felt in need of the extra energy. Once we exited the sand and gravel, we were hit with a long uphill on the roads. Stellar! This course was brutal, and I was loving it. There truly were few sections on this run that were flat and ‘fast’. I came through the first loop still in the lead but again, I never count anything in the bag until I see the finish line; and even then, I am brilliant at getting out-kicked. I tried to dig deep and run strong that second loop, and I think I put a bit more distance between me and the other women though I could see them all charging hard. The best part of this course was that they cut out the long golf course section from the first loop, so I made a turn and saw the finish only 50 yards away, expecting another mile or so of running.

At this point, with the beautiful finish chute that is the epitome of Rev 3 races, I breathed a sigh of relief and began to smile. There is nothing like seeing that finish line and knowing you laid it all out there, and can come away with a win. A great crowd was there to greet me and a huge sense of satisfaction came over me, knowing that today, at least, I was the fastest one out here; I savor each victory so much, because nothing is ever a sure thing and on any day, anyone can come out on top. A bit thanks and congrats to all the fellow professional women, I worked so hard out there trying to keep them behind me and I know they were charging hard! It’s great that we can all make each other stronger in this process; because ultimately, we are all in this together.

This was an amazing way to start 2011, and I have to thank Rev 3 for putting on such an awesome event. I really hope to see this event grow in future years. Also a big thanks to my sponsors for 2011, including PowerBar, Quintana Roo, Zoot Sports, Reynolds, Recovery Pump, Katalyst Multisport, Road ID, Xcis, Jack & Adams, ISM, Oakley, Hill Country Running, Advanced Rehabilitation, Go with the Flo Acupuncture and 3 Cosas Massage; and of course the endless support from my husband Derick (and Durata Training) and his guidance. Now, I need to get off of this computer and soak up the Costa Rica sunshine while I can! Here’s to a great 2011, best of luck with your goals and remember, keep it all in perspective; when it got tough out there, I looked over my shoulder at the ocean and at the people of the town and reminded myself where I was and that no matter how hard it got, I was lucky just to be out here doing it. Thank you for reading!
~Kelly

Congrats on kicking off 2011 with a win- doesn't get much better than that! And the race/Costa Rica sounds awesome- I'm kicking myself for not using my free entry for it! Sunshine, beach and a race sounds like the perfect combo!
Congrats again!

Simply awesome! Good for u!!!