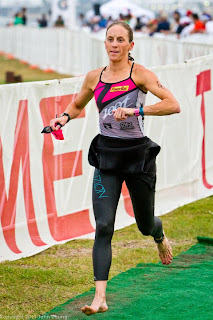 We are always our own worst critic. It’s likely one factor that can allow us to do great things, but on the flip side, we have to know when to back it off and to see the bigger picture. I went into Lonestar 70.3 aiming high, as I always do. Sure, I had raced the week prior, but the general consensus seemed to be that the one week turnaround seemed to work actually better than the two week, and I was optimistic; as well as smart and careful in the week between the events, paying attention to all the small details; ice baths, very easy training, spending some time in my recovery pump boots, getting the needed acupuncture and ART, etc. The body felt good, I felt confident in my fitness and ready to lay it all on the line; for the third time in four weeks (a little detail I tried not to remind myself of too much).

This race was the designated ‘US Pro Championships’, hence there were many strong US women, but also a solid contingent of ladies from around the world, all wanting a piece of the hefty prize purse but also the highly sought after “Kona Points”. I, of course, being among them! I did have some nerves, but I have looked at these as a good thing; they mean that you care about what you are doing, that you’re anxious to compete. It’s only after the race, seeing how I somewhat beat myself up over my result, that I realize the nerves may have been moreso ‘pressure’.

We kicked off promptly at 7:03 AM on Sunday, a few minutes behind the men, in Galveston Bay. Don’t let the word ‘bay’ fool you; this bay hands you some solid waves, and today was no different (though a good bit calmer than last years swim). The lead swim women broke up rather quickly and I found myself – as usual – swimming alone. Not optimal in waves, but I went with it, cruising along in my Zoot Zenith sleeveless wetsuit, feeling decent, but knowing I had been dropped a bit. Nothing to worry about; soon enough, we were exiting to transition and onto the bike, which I set out on as the 4th or 5th woman. Moving right along…

We hit Seawall Blvd and it was there we would stay for the next 56 miles; 28 miles out and 28 back. The winds were tricky, but I tried to settle into a rhythm. I was rolling my Reynolds wheels, the new RZR 92 rear and a 46 front. I had ridden the RZR 92 the day prior, but I felt like the winds were tossing around the front end a bit (we’re talking strong, persistent and changing crosswinds) so I opted to be safe and ride my 46 front to allow for better handling. I was not feeling great but did not think it was too ugly, yet by the time we hit the turnaround (hell, by the time I hit mile 20) it seemed as though 10 women had passed me. Talk about a mental struggle. It was not so bad that they had passed me, but moreso the ease with which they seemed to do it. I tried to stay positive, but honestly speaking, it was extremely difficult. I told myself ‘keep in it, you never know what is going on up ahead, and maybe they’re not putting too much time on you’. Once I turned around, I found we did have a bit of a tailwind coming home, but it has been awhile since I wanted a 56 mile ride to be over with so badly. It was a welcome site to see transition; yet an unwelcome thing to hear “11 minutes back from the leaders” as I exited onto the run.

If there is one thing I am, it’s persistent, and today was no different. That margin sounded HUGE and I am fairly certain I was in 15th place off the bike. I came out of T2 on a serious mission to at least try to claw my way back into the race. No use in dwelling on the bike, but put in 1 hr and 20 min of running as hard as you can and call it a day, period. I caught a few ladies early on, one was walking, and a few others I was simply able to catch and pass. With a 4 loop run course, I could see some action up head and I could tell the gap was large, to say the least. Around Moody Gardens we went, and I was able to clip off women with each ensuing loop. That said, it did not feel ‘smooth’; I was working hard, with no idea of my pace, but racing is hard and I expect that. As I passed women, I had no idea of my place except that it was better than when I started the run.

Here is where it got exciting. At mile 11 or so, I was told that I was only a small bit behind my good friend Desiree, who was having a great day out there. I figured that with as well as she had ridden, she was the top American; meaning if I could catch her, than I would be the top American. I managed to pass her at about mile 12 and gave her some encouraging words, but tried to stay on the gas. Derick then yelled to me with maybe a half mile to go, “Mary Beth is 30-seconds up!” to which I replied “Shit, she’s AMERICAN!” I could see her ahead as we hit the winding sidewalk, with maybe 2-3 more minutes to run. TALK ABOUT PAIN! I put everything I had into that final 1/2 mile, but it was not quite enough, and I fell short by 14 seconds to Mary Beth; but, the effort was enough to move me into 5th overall, which, in hindsight, was a hell of a run considering where I was before it started!

Back to the ‘managing expectations’ part. I expected a lot out of myself in this race. As an athlete, we try to be as absolutely prepared, strong and mentally tough on race day as possible. My body, my mind and “I” wanted this so badly; to come into a race where I was 3rd last year, be on top of the podium; to close out the first bit of my racing season with a bang. I had said that Top 3 would be awesome on this day, and if not, then I wanted to be Top American. It’s not always enough to ‘want’ something, sometimes life has other things in store for us. I fell 14 seconds shy of this goal, which is pretty nominal when we are talking 4+ hours of racing.

Perspective: I’ve been fortunate to win many races lately; spanning back to the latter part of last season. It’s fun to win, it feels good, and it’s quite addictive. Should I ‘expect’ myself to win each one? Not at all. Should I be content knowing that I put it all on the line; that without any doubts, I know I gave it all I had in me, at the time, on the day? That I raced with heart? Without a doubt.

There is nothing wrong with expecting the best out of ourselves, but when we let those expectations turn into pressure, even in the slightest sense, this is when a problem arises. I don’t think that this slightly lackluster result was any more than I was getting fatigued; my cycling legs were telling me ‘enough racing’ and they did not want to fire like they should have. And, that’s ok. Lesson learned; it is time to rest. But as Derick said, I should hold my head high, knowing that I layed it all out there and I never gave up. When it comes down to it, that’s all we can ever and should ever expect of ourselves; give it what you’ve got, at the moment, on the day.

A big thanks to my those who are instrumental in what I do, Zoot Sports, Quintana Roo, PowerBar, Reynolds Cycling, Recovery Pump, Katalyst Multisport, ISM Saddles, Road ID, Jack & Adams, Advanced Rehabilitation, Hill Country Running, Go with the Flo Acupuncture, Xcis Software, Oakley, and 3 Cosas Massage. It’s been a good start to the year; now it is time to rest and gear up for one big training block in preparation for Ironman Texas on May 21st.

Thanks for reading!
~Kelly

as a fan of yours that loves watching you succeed after all your hard work, I have to say that part of the joy of watching your journey is your honest self reflection and your willingness to always put it on the line when you race. But even for the best athlete in the world, that doesn't always land you on top of the podium. some days you win, some days you don't…. the awesome thing is that when you don't win, you still put up a stellar and inspiring performance. you never give up, make excuses or give in to any exterior circumstances. that is precisely what brings you success in the sport. I don't know many other athletes that can mentally come back the way you did to come in 5th! very nice work. hold your head high and continue to be proud of the amazing success you are having this season!!!!!! rest up!!

Great job, Kelly! Sunday was tough and for you to be able to race down so many women, in the that stifling heat and humidity, is amazing. I'm sorry I didn't get to see any of the action. Glad we got to speak, before the race, though.

Great job! I also enjoy your honest self reflection as you break down your race day. As a side note, you missed another hot race here in St. Louis on Sunday.

“Should I 'expect' myself to win each one? Not at all.”

If there is one thing I've learned (and Kelly.. I'm old) hee heee is how difficult it is to keep expectations and pressure on one's self in two little neat boxes. Even as an age-grouper after having a few very good seasons of racing and managing consistent age group podium places, it became more and more difficult to manage this. I used to like it when I'd show up, head down, in my own little world, not really concerned with “placing” and being surprised I won an iron or a Crockpot. lol… Anyway, unfortunately you can show up mentally and physically prepared but it's no guarantee. What you are insured of: Becoming a more solid, tough, seasoned competitor and that sister, is what you are. xx 🙂