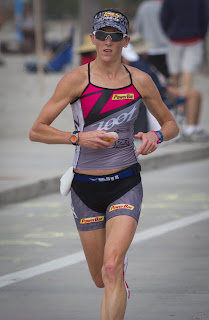 I would be lying if I didn’t admit that I was slightly disappointed with my performance this past weekend in Oceanside, California. That said, this sentiment was with me through about mid-day on Sunday, at which point I had done enough thinking about the race, mulling over it, and I then snapped out and realized that in reality, I had a very solid race, it’s just that a few ladies had even better races, and if I looked at my performance alone, I am extremely pleased with the execution and the effort. It’s interesting what time can do to your perspective, and I’ve spent far too many years as an athlete ‘beating myself up’ over one event. I now realize life is too damn short. Give yourself 24 hours, think through the good and bad, learn from it, move forward and be better for the experience.

We arrived on Thursday morning to San Diego, went to our friends condo in La Jolla, and I built up my bike immediately. I have a history of often times doing something ‘new’ on race day, but this was an entirely new level here; I would be riding my new pink camo Quintana Roo CD0.1 along with my Reynolds RZR 92s (race wheels) for the first time on race day! Brilliant! Not ideal, but due to the timing of it all, it was what it was; I had ridden the new bike on the trainer a few times. We dialed in the bike on Thursday, I took the day off, and we hit up Pizza Port in Solana Beach for dinner. If you go to San Diego, you must eat at Pizza Port! Their pizza dough tastes like a doughnut. Great pre-race food!

Friday was a fairly busy day, as I got up, did my short 30 min spin and 10 min jog, and then had a few sponsor commitments in the afternoon. I did a Zoot panel at the race expo from 1-1:30, a Quintana Roo signing from 2-3 (don’t be shy people! I signed all of two photos! Everyone was at Andy Potts’ and Matt Reed’s booth across the way, I’m not sure why. What have they done?) 🙂 and then did the usual pre-race meeting at 4:00. We enjoyed an early dinner with Hillary Biscay & her fiancée Maik, some pizza and my obligatory beer (a Peroni, nice and light!) and it was off to get some sleep. 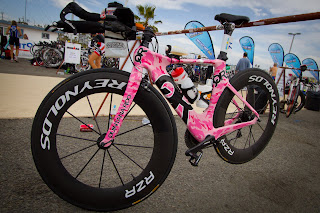 Admittedly, I felt a bit of self-induced pressure on race morning. I have been fortunate to have started 2011 off with a good bit of success, and with that has come a slight bit more attention. I joke that I want to always ‘fly under the radar’. Maybe that is why when the body markers said “Age?” I said “33.” I figured maybe if my leg said 33, no fellow pro women would know who I was. Yeah, I probably should have the “P” on there…in any case, I digress. I tried to lighten the mood a bit when we went down to the swim start (those final few minutes are awful! So intense and we are all nervous as hell) and they said “Pro ladies, you may now step into the water, loosen up in your wetsuits.” To which I responded, “Meaning, we can all pee now.” Everyone laughed, but I was being serious; who doesn’t do that the minute you hit the water?! But of course, it’s my way of relaxing myself as well. 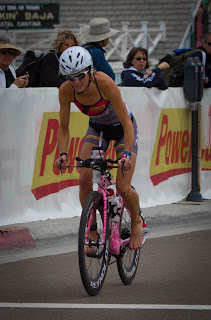 Promptly at 6:45, the ladies were off into Oceanside Harbor. I knew there were a couple of good swimmers and luckily Dede Griesbauer and I got a quick lead and swam great together. (I say together, but I really just stuck on her feet like glue!) I tried to get around her a few times to take a pull, but the effort to do it seemed silly as our pace was truly ideal so I just tried to navigate off of Dede. We swam well together and exited 1-2. I did the long run through transition, moving into first, only to negate any time gained by grabbing my bike, slipping on my Zoot Prophet wetsuit, and making for an epic fall. Good thing we are required to wear helmets in transition! I dropped my bike, mildly cut my foot on my chain ring but when I got up, the front wheel wouldn’t spin! So I panicked tried to fix the problem, quickly adjusting the front skewer. Unfortunately, the front brake had been knocked off center a bit. So while I recovered fairly quickly, I knew the alignment was slightly off. I was frustrated to have lost time here, but tried to look forward and move on. A great swim was off-set but a T1 mishap but what can you do? 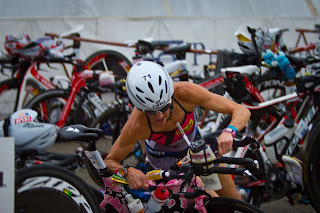 I got out onto the bike course which is pretty flat for the first 15-20 miles, and then the fun begins. I got passed by a few women during those miles, again frustrating but I plugged along, waiting to eat up the hills. We got to the first big climb and when I stood up to go, I heard a slight ‘swoosh’ and I knew the front brake was rubbing a bit. I debated a few times stopping to adjust, but I was fairly certain it was just on the climbs, so I decided to try to ignore it, but it definitely messed with my head a bit. All in all, the bike felt mediocre to me today, as my quads just felt heavy and I did not feel quite like my normal self. But as with the T1 problem, can you do except keep on going? And that is precisely what I did, trying to stay on the gas and get to T2 as quickly as possible.

I transitioned and I knew that there was a race going on far ahead of me (I was told approximately 6 minutes was the gap to first), and that I had a lot of work to do. I was asked on Sunday at the Zoot Ultra Team camp, “What do you think about coming off the bike knowing you are a few minutes down; do you want to just get back in the mix or do you want to win?” I may not always be correct, but no doubt, my mindset is “Run your ass off and win this thing!” I never want to settle and I never want to feel sorry for myself. The bike was less than stellar, but I love to run and I wanted to make this exciting. That said, I knew Mirinda was up ahead so I figured just try to use her as your sight and lessen the gap to her, because no doubt she would be eating women up ahead of me. 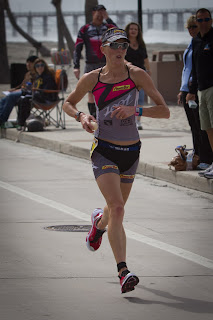 I headed out on the 2-loop run course, which in my opinion is not ‘flat and fast’! It’s beautiful as we run right along the ocean for a few miles, but you do have a couple of small hills and mentally, I find the long stretch along the ocean challenging because it feels endless. I felt alright but not stellar for the first loop, and I had made up a couple of places, but I believe I was in 8th off the bike and I knew I needed to run very fast and some ladies up ahead would need to run not so fast. I also knew that many of those women ahead were strong runners! Nothing was going to be easy today. By the time I hit mile 9, I think I was in 6th place and I literally said to myself, “OK Kelly, you are running out of time here, get it moving if you are going to do anything here today! Pick it up!” The body seemed to turn a corner and those final 3 miles felt better than I had the entire run, which is pretty atypical. I was able to pass one more girl, Melanie McQuaid who had put up a stellar bike, and run myself into 5th place overall.

So final thoughts? It may sound odd, but I am glad that this race turned out as it did. This is a good reminder that shit happens in races and it is all in how you react to it; and as far as ‘shit happening’, this was minor; a fall in T1 and feeling less than stellar out there on the bike. I feel fortunate that the past few races I have felt strong, things have gone very according to plan and I have been able to come out on top. But every race is different; and nothing is ever given to you. I kind of like having the cards stacked against me when I am out there, as they were going out onto the run. It gives me two options: feel sorry for yourself, or do something about it? No matter how far down, I will always take the second option. I have to give a huge shout-out to the ladies up ahead of me, as they made this a hell of a race and they all put together very strong runs; as well as the entire field of women, this was a fast and challenging field assembled and it is races like this that raise the bar for all of us. Good stuff. 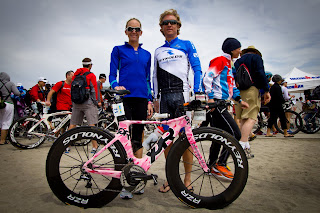 So life is good! Derick and I had a great weekend in San Diego, saw some amazing friends, and I got to go and do what I love to do. Lucky me, I get to do it all over again in just 6 days! A huge thanks my sponsors Zoot Sports, Quintana Roo, PowerBar, Reynolds, Katalyst Multisport, ISM Saddles, Road ID, Recovery Pump, Jack & Adams Bicycles, Advanced Rehabilitation, Hill Country Running, Oakley, Xcis Software, Go with the Flo Acupuncture & 3 Cosas Massage, for your unconditional support. Also a gigantic thank you to my parents who have yet to see me race this year! But are always with me when I am out there and my husband Derick, my official super support race Sherpa.

Thanks for reading & see you in Galveston!
~Kelly

Wow. Check out that bike!

Nice write up. That QR looks really sweet(for chicks of course). Look forward to seeing you out at Galveston.

The new bike is awesome- no flying under the radar with that rig! My yoga teacher said this to me last week (I also like to be under the radar) and it immediately came to mind when I was reading this. “You should always be as big as you can be, take up lots of space, and make your presence known because by doing that you inspire everyone else around you to be big too!”

For the swim, if you are swimming with someone in the lead pack, do you consciously try to take turns pulling, if the day/course allows for it? Guess it really wouldn't apply to age group waves but is it just proper etiquette to take turns out front?

That was a great race- a hard fought finish (by the entire pro women's field)- definitely a race that would have been great to have seen. Congrats, and have fun in Galveston!
Oh yeah…and I would have come visit at the signing, if I was there! 😉

Hey Bre, I'd say not really… often I find that someone else seems to want to be up front, b/c they seem to push it a bit. If I find that I feel I can go faster, then I'll try to get around. But for the most part you just try to find your groove and hold it. But, knowing it was just me and Dede I thought it'd be nice to at least try to pull a bit! 🙂