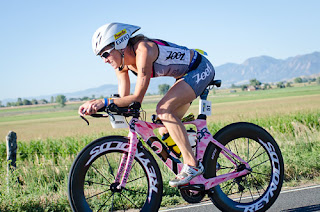 The quick and dirty on Boulder 70.3! (As quick as I can possibly make it…which may be a contradiction in terms).

This race was a bit of a last minute decision (well, seeing that I am a planner, last minute being probably 6 weeks ago that I decided on it). Derick, myself and Amico have been hiding out for about 3 weeks now in Salida, Colorado; a nice little mountain town of about 5,000 people and at about 7,000 feet of elevation. My original plan was to race Steelhead 70.3 on August 14th, but seeing that Boulder was just one week prior and it was only a 3 hr drive from Salida (and ~1500 feet lower in altitude), I figured why not give it a go. Minimal travel is always a plus when considering where to race. Plus, I had not raced this event since 2006 when it was “5430” and when I truly still sucked on a bike. 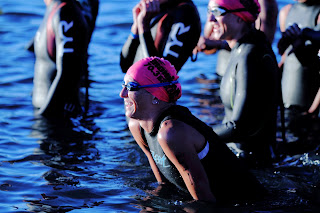 (Why am I smiling? I wished the ladies ‘good luck’. Someone said ‘have fun’. We all laughed, and I said “Yah right… we all know that is such a load of shit!” …in all honesty, I figure a smile or a laugh if even forced before the gun relaxes me a bit!)

I went into this event not fully ‘rested’, but at the same time, definitely not ‘tired’. I don’t think it’s so smart to go into any race of this distance fully tired, especially in the back half of a season. So we headed to Boulder on Friday for the Sunday race, and I took a few light days including a rest day going into it. Weather was awesome on race morning, and while it was predicted to be ‘hot’, it turned out to be very comfortable for me. The women kicked off right at 6:33, 3 minutes behind the pro men.

Swim was wetsuit-legal, so I opted for my Zoot sleeveless Fuzion. I knew I could be solo’ing this swim, but luckily the course was beautifully marked and very easy to sight; thank you to the race staff for not making us swim into the sun! I took it out hard knowing that I needed to create as much of a gap as I could on the other ladies for the bike, notably on Angela. The first few hundred yards felt good but I could feel my breathing a bit shallow given the altitude, so I tried to dial it back a touch by the time I took the first turn. I relaxed yet tried to keep my pace strong, not knowing where the other ladies were, and exited the water in 26:12, with a good 2-minute lead. 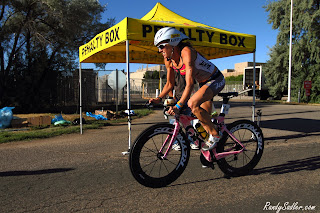 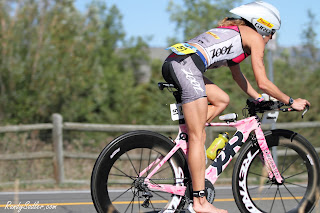 I transitioned onto my pink camo QRCD0.1 equipped with my badass Reynolds RZR 92’s to the rolling yet fairly fast bike course. I loved the first 6-10 miles which were kind of a false flat, and I tried to push my intensity a fair bit to keep a lead. Unfortunately I was passed about 15ish miles into the bike by Angela, which was much earlier than I would have liked to see her! She blew by me and at first it angered me to see her so quickly, then I said, “Keep her in sight.” That was a good plan yet it only lasted for a few more miles. I let it go yet tried to keep on the pace I knew was the best I could sustain. Coming onto the second loop, I actually felt just as strong, taking my PowerBar gels consistently (about 7 of them on the bike) which kept my energy levels up. When we did the final short out and back at about mile 45-50, I could see that I had maintained a gap the the other women, which I felt good about. But I needed to worry more about the 6 or so minutes that I had to make up coming into T2! As with Ironman Texas and Buffalo Springs, I intentionally dialed back my intensity just a bit the final 2-3 miles of the bike to loosen up the legs for the run. A 2:23 bike split lost me some time, but overall it was a solid effort and honestly all I had in me on the day; onto the run. Nothing I could do now about the gap but try to close it. 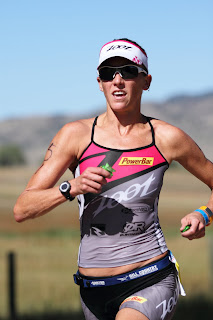 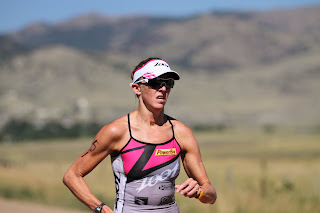 I transitioned and was out on a mission. I often don’t mind a gap (on the flip side, I love it because it means there is a race ahead of me that I need to become a part of!) but 6 minutes was fairly hefty. The Zoot pink Ultra TT’s were on and I was out of there as quickly as possible. The running legs felt great, and in that first mile I said to myself “OK, 6 minutes. If you can run 30 seconds each mile into her, you can close the gap.” I am always up for a challenge, and I felt strong but tried to run smart. The quads felt like they could cramp up. I was really running in no-man’s-land as I could not see her up ahead of me at any point on the 2-loop, dirt road run course. I just focused on each mile, taking a PowerGel every 3 miles, and running strong. At the halfway point, I heard a few people tell me “4 minutes back.” NO GOOD KELLY! THAT AIN’T GONNA CUT IT! To be honest, it pissed me off! I said to Derick when I passed him at mile 6, “I can’t run any faster!” I then came through transition right after seeing D and the announcer said, “Kelly has about a 4 min gap to Angela, and is running about the same pace!” and THAT made me angry! ha! I knew she was running very strong, but I thought about what I had said to Derick and told myself “Now or never, blow up or try to win it. Period. You CAN run faster.” When I hit mile 7, I notably picked up my pace and the craziest part was, I had another gear! It was pretty cool and a bit surprising. I felt stronger and stronger as I went and I eventually was able to close the gap to just over 2 minutes, but I knew with about 2 miles to go that this was Angela’s race to win; that said, I pushed my pace to the limit all the way until the finish line. That’s just the way I like to race; I may not win, but I’ll challenge myself as much as possible; and you never know what could happen up ahead.

I was able to finish with a 1:21.10 run split, and actually negative split it, which is something I was very proud of. Total time was 4:12, and she was a 4:10; Angela is a very solid athlete and she has put in her time at this distance! That said I was pleased with 2nd on the day. You cannot control what others do; this was her day, and the competition pushed me to a close to PR overall time on a solid course at altitude nonetheless. Also a shout out to Joe Gambles, overall men’s winner who had a stellar day out there; seems hometown advantage worked for both of them! I see this as a good sign of where things are, and it gets me excited for the final training block for the big one in Kona on October 8th.

I feel very fortunate to have put together thus far a solid and consistent season. I felt a bit of anxiety the week before Boulder as the pressure could mount up, if I let it… I will admit it would be easy to let it. But, as with anything else in life, I knew all I could do was go in there and once the gun went off, race my race to the best of my ability. There is never a question of if I will leave it all out there; and when I knew that I was losing minutes to Angela, I had to focus on myself, my bike, and my race. Yet another good lesson in controlling what we can control and letting go of the rest; and despite maybe a large gap, believing that a win is possible; it may or may not happen but I’ll know that I gave it my best go.

A big shout out to my amazing support team: Zoot, Quintana Roo, PowerBar, Reynolds, Recovery Pump, ISM, Road ID, Katalyst Multisport, Durata Training, Jack & Adams, Oakley, Xcis, Hill Country Running, Advanced Rehab, Go with the Flo & 3 Cosas. The next order of business is a few more weeks in Salida then we’ll mosey on back to the oven (Austin) for final Kona prep. Unfortunately, I’ll not be at Vegas 70.3 Worlds; it was a very tough decision to make but I just don’t think that one is a smart race for my overall plan. I may toss in one more low-key race, but we’ll see how the coming weeks pan out.

…and this is where we get to retreat to for two more weeks!… 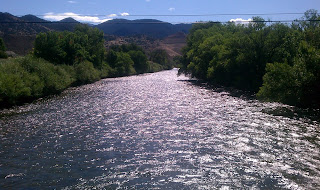 Thanks for reading & be safe out there,

I always enjoy reading your posts. I only wish I had been in Boulder this weekend so that I could have come out and cheered you on. Let me know next time you're in my neck of the woods for a race and I'll try to come out. Good luck to you in the rest of your season!

I love the pink bike!

Sounds like a pretty good race for a last minute decision!! You are such an inspiration… I am just starting to get into triathlons and hope to do my first one soon.

Love your blog & thanks for letting us in on your journey!

Excellent job Kelly. Way to handle all that emotion and not let it take a negative spin on your race. A true professional you have become. Enjoy the rest of your stay in Colorado. It looks lovely in Salida.

today's word verification to post this: pitypod. too funny…. “yes, when I want to sulk and be by myself I go curl up in my “pitypod”