~Success is not final, failure is not fatal; it’s the courage to continue that counts~ (Winston Churchill)

I love the simplicity and truth of this quote. Reflecting on 2011, my thoughts seem to be divided between the many highs and a few lows. I feel fortunate that my lows were not terribly low; they may have been in my book, but we are always our own biggest critic. I raced a lot, I trained strong, consistently and healthy and I grew immensely as an athlete, especially at the Ironman distance. I have a lot to be thankful for and at the same time, I like to take the month of December to think about what went well, where I can be better and how I can learn from the past 12 months as the upcoming season approaches. In doing so, I wanted to do a quick re-cap of 2011; it allows me to focus on the positives but also bring some ‘closure’ the year and prepare to move forward. I like to try to always focus on what is ahead; the past is how we learn and grow, but the future is what we have control over.

JANUARY & FEBRUARY: Houston Half Marathon (US National Champs) was my goal race at the end of the month. Prep for this was a brief 3 weeks, and while I tried to eek out as much as I could from my run training in this short time frame, it resulted in a 1:16.59, not quite as fast as I had hoped for, but a PR and good for 19th overall among some of the world’s best runners. I truly enjoyed this race, especially running among the very ‘elite’, and felt honored to be there. 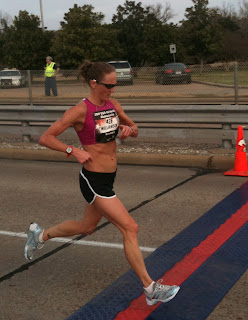 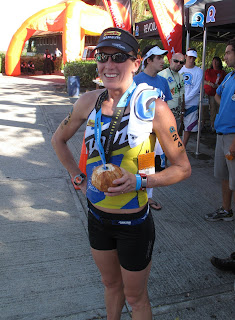 In February, I hit up the Rev 3 Costa Rica Olympic distance race. It fun to see a new part of the world, enjoy a laid back atmosphere, yet also get to line up against a good competitive women’s field. I was pleasantly surprised at my early season speed, up front out of the swim, taking the lead at the start of the bike and holding it through the end, finishing 1st in a 2:10.

MARCH & APRIL: I decided to continue my Central American ‘tour’ and head to the inaugural San Juan 70.3 in mid-March. Despite feeling fairly flat through about 30 miles on the bike, I decided to dig deep and push the final half, at which point the legs seemed to come alive. I started the run in fifth or sixth and by about the halfway mark of the run, I gained the lead and didn’t look back. I was able to secure my third 70.3 career victory here in a 4:15, a solid 4 minutes ahead of 2nd place; a great way to kick off the season! 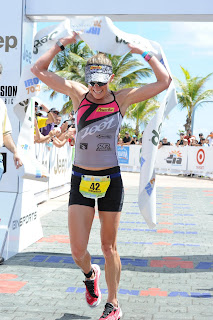 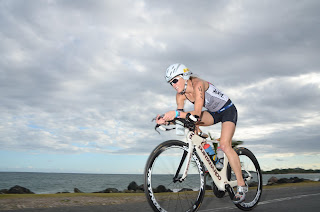 Later March, I headed out to Oceanside for California 70.3, and I would attempt my first ever ‘back to back’ 70.3 races on consecutive weekends. I absolutely love this course as it always draws a top notch field and is an honest, hilly, challenging course. I wound up 5th (4:29) with the 2nd fastest swim and run times. I then headed just south of Austin for Lonestar 70.3, the US 70.3 Pro Championships, the following weekend. I was 5th (4:14) here as well, with a solid swim, lackluster bike but a stellar run which moved me right back into the action. I was just 14-seconds shy of 4th place and the Top American slot, so despite being a bit bummed that I missed out on that, I was very pleased with a come from behind run to solidify a solid result. 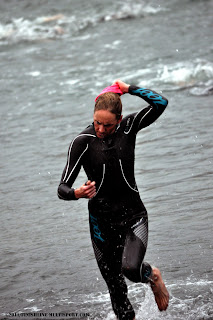 MAY & JUNE: May was the big one that I had been focused on for all of 2011 at that point, Ironman Texas. It was right in my backyard (3 hours south) and I felt excited, relaxed and confident. The end result for me was huge, as I exited the swim 1st, came off the bike in 9th and ran myself into 2nd with a 3:04 run and an overall PR by 29 minutes of 9:07. I was not surprised by the place, as I knew I was capable of finishing near the top, but I was pleasantly impressed with my overall time. I took some much earned downtime and came back in mid-June to one of my absolute favorite events (as I have done it 5 times!), Buffalo Springs 70.3, and notched 1st place there with a 4:26, a good 8 minutes ahead of 2nd place. 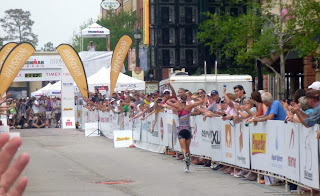 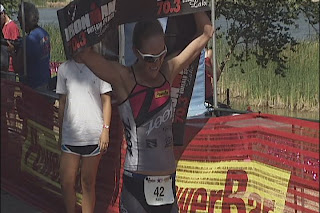 JULY, AUG & SEPT: I headed to my home state of Indiana in mid-July (2 weeks after Buffalo Springs) to race Muncie 70.3, which also happened to be my first half ironman back in 2004! Needless to say I was a little bit faster than 7 years ago, taking 2nd in a 4:12. July saw my husband Derick and I head out to Colorado to host a 5 day triathlon camp, followed then by a 5 week training stint in Salida, one of our favorite places nestled up at 7,000 ft. I raced Boulder 70.3 in the middle of this trip and in the middle of my Ironman Hawaii training block, but felt incredible, taking 2nd in another solid 4:12. As you all know, I opted to skip Vegas 70.3 in favor of focusing on Kona, so September was just a month of training here in Austin. 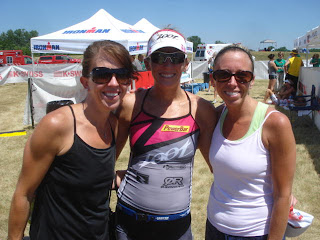 OCTOBER & NOVEMBER: Kona finally arrived, and we headed out there a week early to get situated. I felt great going into it, I had focused on my weakness’ (which to me, compared to 2010, every discipline needed to be faster!) and I was relaxed and jumping out of my skin to race. I exited the swim in a :55, which was 2 minutes faster than the previous year. I seemed to struggle to find a groove on the bike, and gave up about 2 minutes from the previous year; but I stuck with it and ran a PR 3:03 marathon to move myself up to 13th in a 9:29, a good 7 minutes faster than in 2010. I set very high standards for myself, all of which I set based on what I truly believe I can do, and this was not where I wanted to finish; that said, there were many positives to come from the day and in the big picture, I still consider myself a bit of a novice at the Ironman distance! There is so much to learn and Ironman Hawaii can really throw it all at you. The fire is fueled and the lessons are taken to heart to be better in 2012. 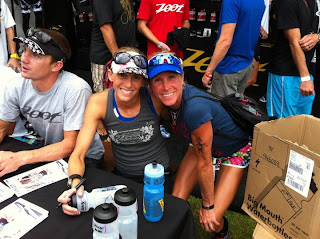 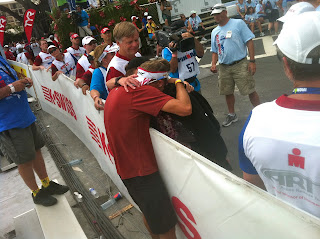 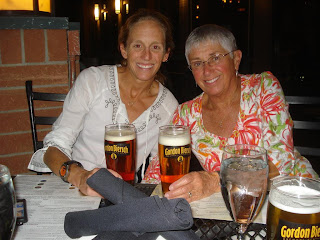 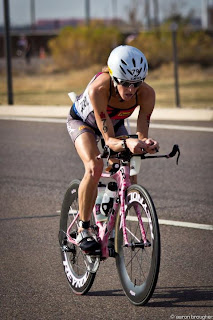 I closed the season by heading to Ironman Arizona, which I decided upon after Kona. I felt strong and like I had better in me…I have had an insatiable appetite for competing this year, and my body has been recovering up well. Physically and mentally, I wanted to do one more race. I did many strong 3 hr rides in the short interim period, with the goal of biking well in AZ. The day started solid, with a 51 swim (2nd) and a 5:03 bike, which felt incredible (through mile 90). I believe that we have to take risk sometimes, even in Ironman. I started the run strong, with ground to make up, and struggled with some stomach issues; that said, I hate making excuses and in hind-sight, I feel I may have ‘overpaced’ it to start; no fault but my own. On a day when I was forced to make a few stops and walk a bit, I still managed a 3:11 run, and a 9:12 overall for 6th place. While I had hoped and envisioned a better result, I can step back and realize a few things from Ironman Arizona and my entire season…

I have always been one to see the bigger picture. I got my pro card in 2002. I have now raced everything from ITU to Ironman. I wake up each morning and I love what I do; I look forward to the anxiety of “can I hit this workout?” and I struggle to take full downtime in the off season because it makes me happy to ‘train’; it is just part of who I am. I’ve been told by a few people along the way that I would never be a good Ironman athlete, because I cannot ride well enough. I don’t do things to spite people, but I love when the card are stacked against me because it takes a hell of a lot for me to give up. I don’t really buy into race predictions and previews, because I believe on any given day, it’s anyone’s race to win (or for that matter, to lose). We choose our own path and I believe the mind plays a crucial role in the outcome.

So here’s to another stellar year in 2012; I don’t know what it will bring, but rest assured I’ll be giving it everything, just as I have the past 10 years.
Thank you for your continued support ~ Aim High my friends! 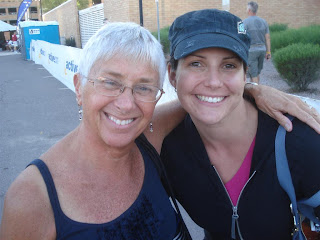 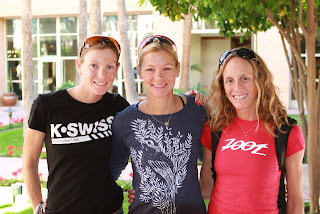 Love the season recap, incredible year when you look at everything that you have accomplished! Can't wait to cheer for you next year- hopefully I'll end up racing a race you are at and can cheer for you in person. I can't wait to see what you bring in 2012…it's going to be amazing. Happy Holidays & hope that you are enjoying some well-deserved time off!

From one Hoosier to another, congrats on a great year! Enjoy the holidays and good luck in 2012. Maybe we'll see you at the Go! here in St. Louis?