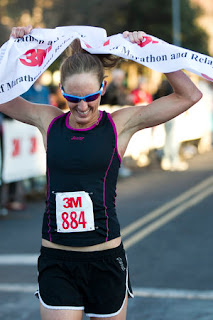 To put it simply, I feel like this race removed a huge monkey off my back. I raced the 3M Half Marathon here in Austin, notoriously known as a ‘fast half’ but my past experiences (2007 & 2008) only recall a very painful half that ate me up and spit me out by mile 10. It is a gradual downhill race, point to point, so a net loss in elevation, but they actually threw a few ups into the course this year for good measure. Personally, I much prefer this to all flat or too much down as it just pounds your legs to a pulp. I have run countless 1:17-1:18 half marathons, and a few of those were off the bike no less. While my overall ‘time goal’ deeply seeded in my head was fairly fast, I just wanted to firmly break through that 1:17 barrier that seemed to haunt me for the past few years.

I viewed this race as a good way to start my (early) season, try to see what I could do for a half marathon, and gain some good fitness. I also wanted to just shake out the nerves a bit. With Panama 70.3 in just 2 weeks, it’s a rather high-profile race, and while this is not ‘small’, it is small(er) scale and simply by virtue of it being a running race vs. triathlon, I feel like I can carry a bit less pressure into it. That said, I did give myself 2 very light days of training so that my legs would feel a little snappy on race day. I have plenty of time to slog through 4-5 hr bike rides this season, so I spared myself of this the Saturday before race day. Just a nice swim, a few plays with the dog and a few hours spent watching a movie, lounging on the couch. I have to say, it was a rather pleasant way to spend a Saturday! Somewhat like a “normal” person! Another nice thing about racing, it allows us to REST a bit…a novel concept!

My plan was to try to keep the pace between 5:40s and 5:50s, nothing too much more ambitious, at least the first 6 miles. I started off with a woman who I have immense respect for, Chris Kimbrough, one of the best masters runners in the country. Chris and I rolled through 3 miles in about 5:40 pace at which point she said “woah” and I took note. A little fast, but not too far out of the range and I was feeling good, so I tried to dial back slightly but still roll with it. There was a woman up ahead a bit, but I wanted to race my race today…not worry about placing, unless a win presented itself. That said, she was like a little carrot up ahead which kept me wanting to run a bit faster.

I was able to move into the lead by about mile 6 or 7, and I simply tried to hold my pace. I was looking at my watch but just as a gauge, trying not to get too wrapped up in each mile split precisely. When I hit mile 7, the mental game kicked in a bit. I told myself, “Only 6 miles. You’ve done 6 miles of tempo within your long runs the past 3 weeks, on tired legs, this is nothing. Keep it rolling.” It really helps to try to keep your race in perspective, especially when it gets tough. I took it one mile at a time, and I came through 8, then 9, and finally 10, when I told myself “Just a 5k. You’ve done tons of these the past few months. You love 5k’s”.
(self-fulfilling prophecy here!)

And this is where the mental game became even tougher. There is a point in a race when, it’s not so much how badly it hurts or turning off the pain, but on the flip side, you’re having a great day; better than expected; maybe what you had hoped as ‘best case scenario’ is actually happening. It’s really easy in this situation to get ahead of yourself, get excited, see some stellar finish and suddenly the body begins to tie up. I’ve had it happen many times. So I forced myself to pull away from that vision, back to the moment, and said “Keep on pace. It’s not over ’til it’s over. One mile at a time. 3 strong miles. Control right now.” I had to keep myself IN THE MOMENT and this is something I have learned can be so tough to do; it is essentially not letting your emotions take over, but focusing on the here and now.

Thankfully, the miles came along and the body held up. 11, finally 12, and YES as I love to say “The Final Mile!” Here, you lay it out. It’s all you have left in the tank. Unfortunately, they gave us a short uphill to lay it out on… however given all the downs, I was alright with this. It was time to grit my teeth and just go!

The finish was a welcome sight, and it is hard to describe how ecstatic I was to see that a 1:14 would happen…I pushed forward, and let myself enjoy it. Pumped my fists a bit, smiled on the outside but smiled even bigger inside. 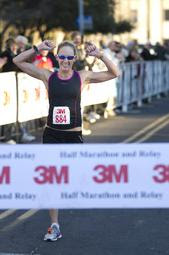 Unfortunately I didn’t have Derick to share it with, as he was off in South Carolina playing “Good Uncle” to his new niece Avery…and I was playing “Bad Runner Aunt”! But the end result was luckily worth the missed trip, and I’ll hopefully make up for it by working a visit into my Rev 3 Knoxville trip.

I am extremely happy with the result, but I also know that it’s a long season and this is just the start. I know that nothing comes easy in sport, so I’ll take this, savor it, hold my head high and be proud of the result, but also re-focus for the next one in just 2 weeks. Short of making it sound like I don’t enjoy the moment (as I feel I am pretty good at that!), I believe that past results can propel us forward but we still have to MAKE things happen in the future. Seems these days everyone is getting faster. I’m just doing my best to keep up!

Thanks so much for stopping by. And if you raced 3M, congrats, and take your recovery from this one as serious as you took your race. It’s a doozy on the legs!

3 replies on “Racing in the Now”

YAYAYAY!!!YOU ARE AMAZING!!!! I'm so happy for you. I've missed your posts so much but this post was worth waiting for! Congrats on cracking 1:15 at the half! Can't to cheer for you in Knoxville!

Rock on, chica! You are SO AMAZING and INSPIRING! You have so much left to give and your career is just unfolding, I know it:) I was going to curl up on my couch tonight, but after reading your post, a run sounds like a better plan.