“Look at a stone cutter hammering away at his rock, perhaps a hundred times without so much as a crack showing in it. Yet at the hundred-and-first blow it will split in two, and I know it was not the last blow that did it, but all that had gone before.”
(Jacob A. Riis) 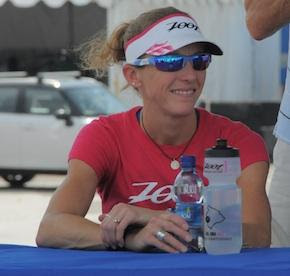 This quote sits firmly planted at the bottom of the homepage of my website. I’m not a huge quote person, but sometimes people just put so perfectly into words how we feel and what we believe to be true. This one really speaks to me. I guess the way that I personalize this quote is that I’ve spent the past 10 years as a ‘pro triathlete’. I use that term loosely, because many of the first 6 years I was just chipping endlessly at something; something I saw in my future but the results really didn’t seem to reflect. The past few years all the hard work has come to fruition. We all have a story, and I guess you could say that mine all revolves around that ‘never give up’, ‘believe in yourself’ philosophy.

The 2012 season kicked off early with Panama 70.3 this past weekend. It was set as the Latin American Championships (not really sure how what races get these titles?!) but moreso, it was an opportunity to go race early, hard, and ‘big’. I knew that a solid field would assemble here and despite having to shake out the early season nerves, it would be a good chance to test the fitness, gain some fitness and hopefully bang out some much sought after points and of course prize money.

We arrived Friday for the Sunday race. Not a lot of time to adapt, but it was only a few hour flight from Austin and a 1 hour time change. I also realized that it would likely be a big city (as was San Juan) so no need to arrive and have the delusional expectations that I would be able to train there. Best to arrive, sleep, prep and race. A slightly sad fact of the job, but unfortunately I go to some amazing places without really ‘seeing’ them. I don’t mind it though, as I still consider myself lucky to get to say I have been to them, even if briefly! 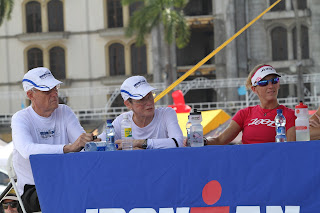 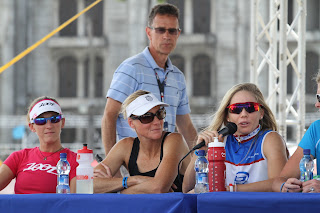 Saturday was busy with a good sleep in, a nice 10-15 min swim in the hotel lap pool, a big breakfast and then the afternoon pro panel and meeting. Before I knew it it was 5PM and I was back in the room after a few hours in the heat, ready for a cold beer (the local being Balboa…a ritual I have! always relaxes me and allows me to remember that tomorrow is just another race), a good dinner and an early night to bed. Unfortunately once the TV turned off at about 9:30, my mind started going (damn nerves!) and it was at least 11:30 before I finally fell asleep. The 3AM wake up came far too early, but as we all know, it’s the 2 nights before that really matters!

The race kicked off Sunday morning about 20-30 minutes behind schedule, but it didn’t bother me too much. You cannot let these things get to you on race day. We were off at about 7:15AM, swimming with the current of the Panama Canal. It was a fast swim and we settled into a nice little group. I found some good feet and along we went, nothing too exciting here, exiting the water in just over 20 minutes. After a quick transition, it was onto the (what I had heard) hilly and slightly challenging bike course. 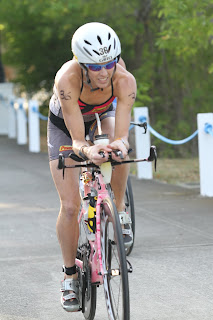 The first 5-10 miles were intense! Many hills and fairly protected. I really enjoyed this part of it, as I love to climb. However as we proceeded, it got more and more open and likewise more and more windy. I had opted for my regular Reynolds RZR 92’s, which are a front and rear 92mm rim wheel. They are awesome, aero and fast! However, as I encountered some rolling hills and big winds, I realized that I was a bit in over my head. To me, the winds felt comparable to Kona the final 15-20 miles. Little did I know, some of the strongest guys out there had changed out their front wheels to a narrower rim race morning due to winds. I am glad I hadn’t known that prior! I tried to just suck it up, deal with it and get through as best as I could. Needless to say, I was sitting up much of the bike course those final miles for fear of getting blown into the forests! I was passed by a few more women as the bike neared the end, but again tried to keep my head down, make the best of it, fuel and hydrate. I can’t tell you how many times I said to myself “Don’t give up. It’s not over ’til it’s over.” In short, by the time the bike leg ended, I felt a bit beat up! I love the few people that have said to me “I love your strategy on the bike.” Unfortunately, that was no strategy… I was going as hard as I could out there… that was all that was in the tank! 🙂 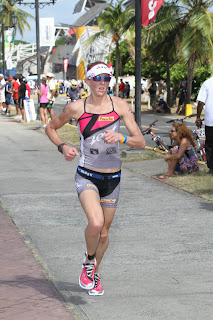 As I exited T2, I saw Derick and said “How far back?” I was fully expecting to hear 10 minutes. He told me 8, but later after the race, told me I was actually 10 back but he didn’t want to tell me that! I put my head down and started moving. The first marker I saw was 3km. I didn’t really check my watch (other than I saw it said 10:21am when I left transition) so I was not sure what kind of pace I was doing. It was a 2-loop run course, and after the first turnaround (about 3 miles), I realized it was a HOT DAY and I had better run smart and not run purely on emotion. I told myself on the rest of the first loop to dial back, run controlled, and try my best to run the second lap stronger as I knew there would be some implosions in this heat. I managed to catch a few women and work my way into 5th or so by the halfway point. As I started the second loop, I started not stomaching something…I guess you could say I was spitting up every few minutes. Not good. Upon some quick troubleshooting, I realized it was the water I was taking in. I had a gel flask of PowerBar green apple gels, and I was feeling that ‘potential bonk’ feel, so I knew I NEEDED the calories. On the final turnaround, I opted to stop taking in any water, only take my gel flask, and use the water and ice to just cool myself. It worked as the stomach calmed down. Here was where it got exciting. 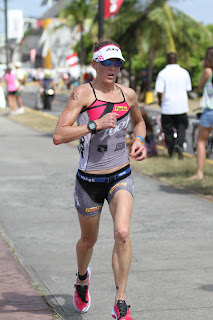 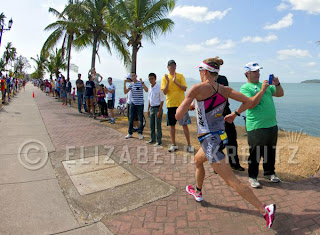 I think I had passed the 18k mark. I was fairly certain that 13.1 miles was 21km’s. So, within 3km’s to go, I had moved myself into 4th place. I knew this was a good spot, a podium would be nice, but all I could do was keep moving forward. The crowd support was AWESOME at this point! People were everywhere. I tried to ever so slightly put my foot on the gas and pick up the pace just a bit. Then, I saw Leanda up ahead…sweet, 3rd place. I managed to pass her and was happy to be on the podium. We started to draw closer to the stadium, and not entirely knowing the course (typical for me), I figured that the finish line must be there. Then, I see someone else up ahead; 2nd place woman, Margaret Shapiro who was having a stellar race. Damn! 2nd place up there?! Now I REALLY have to go hard! I decided to drop all I had left, as in, full on sprint. I passed Margie who was so sweet to say something to me (I think a nice ‘good job Kelly’ or something similar) and I entered the stadium, thinking “Where the hell is the finish”. We were taken around the stadium and it was the absolute fastest pace I could hold. I finally saw the finish, a very welcome sight, and crossed in 2nd place, a 4:19, a bit wobbly, but a very happy camper. I had, without a shadow of a doubt, left it all on the course. 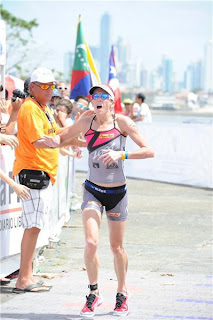 After the finish I was whisked away for drug testing and got out of there at about 1:00. Derick and I went back to the hotel to shower and it was only then that I had a chance to look at the computer to see my time and splits. I was *shocked* at the 1:16.18 that I did on the run, flat out shocked! I knew I had run well but a 1:16?! It was so hot out there! But that said, in hindsight, I didn’t feel like the heat really affected me too much. I am still in a bit of disbelief, but at the same time, I know that I have done the work (years of it) and I think that this is just, as stated in the quote above, the time that everything seems to be ‘coming together’. That combined with the simple fact that I LOVE TO RACE. I actually like being down because it motivates me to work even harder out there. I seem to find a whole different gear and a tunnel vision mindset when I am in the heat of the battle out there. Good stuff. I could not be happier to have managed to kick off the season with this race, which turned out to be an incredible inaugural event.

Thanks for reading,
Kelly

I love the stone cutter quote- it's a perfect reminder to have patience and hard and consistent effort will pay off in the end.

I hope that I get to cheer for you in person this year- you might have to slow down though so I can see you …1:16?! That's incredible. You are gonna be smashing your half-mary PB and do it off the bike!

Amazing, inspiring, and love love love it! I also love that you have a beer pre-race…you keep it real, just another race 🙂

Hi! I do have a pic of Kelly H. riding her bike in “Cinta Costera” highway here in Panama City. How can I send it to her? Thanks, Luis.

Hi Luis, you can shoot me an email at kellymhandel@yahoo.com. Thank you!!

Hey Kelly-we are taking great care of Derick-love your blog- you have a great writing style – excellent balance of pride in your accomplishments and humble! Leslie K

Wow, you're blog is so inspiring! You can check our mine: therealfoodrunner.blogspot.com

i'm sending this post to james ASAP! you are awesome!!
XOXO

YAY! Linds you found it! Isn't it the most fabulous quote ever and the most brilliant post? love it!