This past weekend was the first ‘official’ Memorial Hermann Ironman Texas Women’s Preview Camp. It went off without a hitch; the weather cooperated for us beautifully and the staff and campers were all enthusiastic and excited to be there. It was a nice intimate feel, and all of the women received a lot of one-on-one attention; no questions went unanswered over the 3 days, which was just what we were going for! I just wanted to re-cap the weekend so that all of you ladies racing Ironman Texas can know what you missed out on! 🙂 (There’s always next year!) 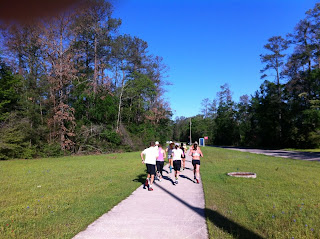 Off for a run

Thursday: Derick and I arrived at about 4:30pm to The Woodlands, and we had an informal dinner at a local Mexican restaurant, Berryhill Baja Grill. We all enjoyed some Mexican food and a relaxed evening for the campers to meet the Memorial Hermann Human Performance Team including Terry Dupler (Exercise Physiologist), Penny Wilson (Registered Dietician), Kim Gandler (Biomechanist), Anthony Falsone (Strength & Conditioning Specialist) and Rebekah Palaian (Licensed Massage Therapist). After a good meal, everyone headed back to the host hotel (Courtyard Mariott) to relax for the busy few days ahead. One great part of this camp was that everyone stayed at the same hotel, and we had a designated meeting room for seminars, meals, recovery room, etc. The campers were able to get some much needed R&R between sessions in a convenient and time-efficient manner.

Friday: Breakfast was from 7-8AM (every day they had bagels, fruit, yogurt, coffee, etc.) and Penny spoke on nutrition during/after breakfast. Penny is extremely knowledgable but what impresses me most is, Penny does not hop on the bandwagon of the ever-changing fads and ‘myths’ in the world of nutrition and sports nutrition. She is very educated, level-headed and takes a practical, straight-forward approach to the concept of ‘eating for performance’. She filled their heads with useful information and after the chat, it was time for a short run. We headed out at about 9AM and I headed up a run session on the IM Texas course (which was a short ½ mile or so from our hotel) focusing on pacing. I simply had the ladies run out 15 minutes steady, with the goal of coming back slightly faster. I think this is a simple but critical concept that is so important (and often overlooked) for Ironman racing. Once back at the hotel, I spent about 45 minutes talking through the IM Texas swim course and also discussing swim race tactics, approaches, mental strategies, and key bits of information that may help them come race day. The women had a couple hours of downtime until our 1pm-4pm Bike Skills & Transitions clinic. This is where my husband Derick stepped in, as he led the bike skills clinic in a grassy field by the IM Texas swim start, which included things such as ‘slow pedaling’, riding with a buddy (touching shoulders, etc), picking up a water bottle while riding (off the ground; we had a 100% success rate!) and finally a game of tag. Needless to say, every one of the women were much more comfortable and confident in their bike handling skills on the long ride the next day. I spent some time explaining Ironman transitions and also ‘regular’ transitions, and we finally headed back to the hotel for some rest before the evening seminar. Dinner was catered in (lasagna, salad, veggies, bread) and Anthony Falsone talked to the women about Strength & Conditioning, but triathlon-specific; mostly focusing on basic core exercises useful to us as well as the value of foam rolling and injury prevention. 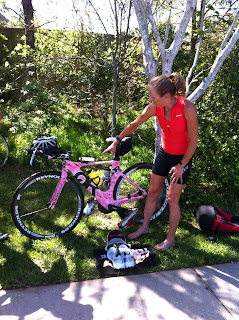 Saturday: Another early day, breakfast was from 6:30-7:30 and the cars loaded up at 7:30 sharp to take the women out to start their 95 mile ride on the Ironman Texas course. They were rolling by about 8:15 (Derick and I went out on our own ride today, as I had raced San Juan 70.3 the previous weekend and had IM Texas 70.3 the following, so had to do some of ‘my own’ training as well!) and they all knocked out the entire 95 miles, while vastly sticking together as a group. There were two aid stations at about miles 30 and 60, so they were able to stock up on all they needed, and there was also a sag vehicle and a mechanic car out with them as they rode. A few women ran off the bike, but with Ironman Texas 70.3 the following weekend, this was dependent upon what they needed to do for their own training; no one was ‘forced’ to run off the bike. By 3pm, they were back to the hotel, good and tired! They all got short massages from Rebekah, the massage therapist, and were also able to spend as much time as they needed on the foam rollers, get snacks, drinks and such to re-fuel for the next day. Dinner this evening was chicken, veggies, salad, and rosemary potatoes. Terry Dupler and Kim Gandler spoke this evening on lactate threshold testing (the value of it, why it is done, what it means) and running biomechanics (the importance of good shoes, the pros/cons of lightweight minimalist shoes, etc) as they fielded questions from the women. I have to say, it was good to see the women enjoying a glass of wine or a cold beer this evening with their meals…they all earned it! Some people hung around and chatted a bit more while others headed off for bed. (Again the convenience of ‘bed’ being ‘down the hallway’ was such a treat!) 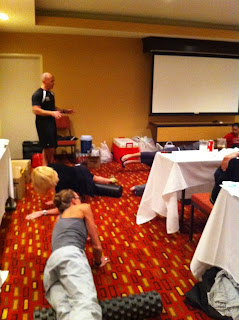 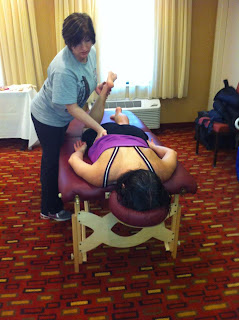 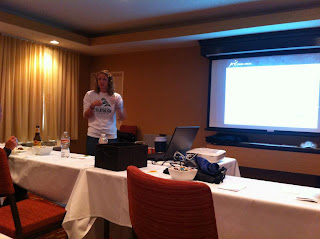 Sunday: The women were pretty much on their own today for their long run, as they all had different workouts on their schedules; but most ran in the range of 2-2.5 hrs, all on the Ironman Texas run course. The staff had marked the entire course with orange arrows (taped to the sidewalk) and also set up an aid station about halfway through, so the women had some support out there but were able to run their own pace. We returned to the hotel (and I grabbed a quick ice bath) and we all met for lunch (an amazing spread of make your own sandwiches complete with salad, coleslaw, chips, and the best chocolate chip cookies you could imagine!). We did a final little ‘wrap up’ session out on the porch in the warm Texas sun. Everyone was freezing in the A/C inside the hotel. Guess that bodes well for them for Ironman Texas eh?! 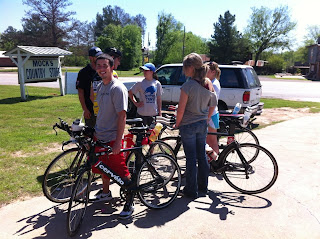 All in all, the camp could not have gone better. The women left there with smiles on their faces, a little fatigue in their bodies, some good color in their faces thanks to the sunshine we had, but all super stoked to have seen the bike course and with the confidence that knew what to expect come race day. We had a few who had raced it in 2011 (or who had done an Ironman) and they were able to help those who were in for their first full distance race. I was just most impressed with how much these women were able to walk away with in terms of knowledge gained; the overall goal of this camp was two-fold: 1) Give them a preview for Ironman Texas and allow them to know what to expect, but also 2) Help educate them on anything and everything “Ironman” and triathlon; hopefully, no questions went unanswered. I feel confident that they walked away with both of these things, a lot of ‘swag’ thanks to Memorial Hermann, Road ID, Recovery Pump, and Zoot, and a few new friends as well! All in all, not a bad way to spend the weekend.

Wow! What a fun looking camp to be able to participate in for IM Texas and congratulations Kelly for an awesome start to 2012!

Thanks girl! I appreciate it. It was a really fun weekend. I hope you are healthy and back at it? Maybe see in at Quassy?? 🙂