Life is full of uncertainties. We can have the best plan of attack; and things may go right as planned for awhile. Then we hit a road bump; an unexpected detour. It’s natural to be frustrated, angry and ask questions. But it’s these times in life that force us to keep moving forward; prevent us from becoming complacent, and constantly motivate us to stay on our game and make us appreciate why we do what we do. At the time the road blocks suck, but in hindsight, think they’re an essential part of life. 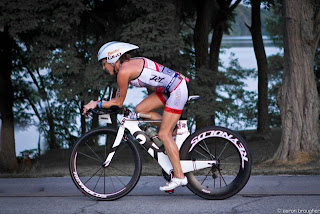 I headed to Muncie 70.3 with a fire in my belly. It was no secret that the previous race (Rev 3 Quassy) left me in the aforementioned state; confused, frustrated and with some discontent. Sure maybe I was not firing on all cylinders that day, but bottom line was I got it handed to me and I didn’t like it. That led Derick and I into talking about ‘what next’ before Muncie, and we decided upon my escaping Austin to ride my bike. The goal was open roads, lots of climbing and many miles. I landed in Henderson, Nevada and did my solo 8 day training stint, which included about 500 miles over the course of 7 days, many rides with 3000-6000+ feet of climbing. For me, this was a huge amount of cycling. I headed back to Austin, recovered, and sharpened up for Muncie 70.3. I was 2nd in 2011, so I definitely wanted to try to move up the podium this year, but also bounce back from Quassy and find my form again. 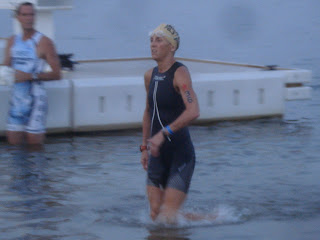 When the decision was made to shorten the course (which we found out about on Friday at the Pro Meeting), understandably many of us were a bit annoyed. However upon talking to the race staff, I realized that this was purely for the safety of all involved; athletes, volunteers and spectators. In hindsight, this was the right decision. I’ve realized having been in this sport for 10+ years that people love to find things to complain about; if they had gone ahead with the full distance under nationally issued heat advisories, you know some would have said they should have shortened it. Bottom line is a race is a race; the directors are in that position for a reason; and it’s our job to race the course presented, and respect their decisions. With that attitude, I embraced it and got excited to go hard the next day. I had a bit of concern about my cycling, since I had put in all of those fairly ‘slow’ miles in Nevada; what if I didn’t have the high end power? Then I quickly said to myself “Kelly, remove head from ass and race.” Sometimes you just have to tell yourself to shut the hell up! 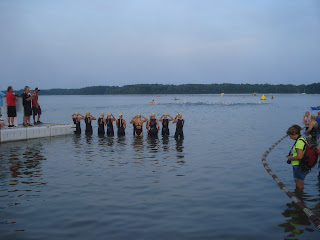 We arrived at about 5:30AM for the 6:30 start and things kicked off right on time. The small women’s field (about 10-12) took off into the warm waters of Prairie Creek Reservoir (supposedly 88F!) 4 minutes after the men. I was stoked that my Zoot Ultra Speedzoot was so thin, as you really didn’t want to wear much more than a bikini in this water! I tried my best to hook in behind Jodie Swallow, who is an incredible swimmer. I got gapped a bit but was able to maintain a few meters behind her throughout the 1 mile swim and about 21 minutes later, we exited; I was pleased to see I was only about 10 seconds behind her. Good start! 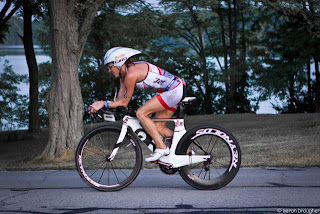 Up the hill from swim exit and onto my QR Illicito, we headed out to the cornfields of Muncie for the 30 mile journey. I remembered this course from last year and I really liked the bike; they closed the course to traffic, which rarely ever happens, and it was fairly flat and quite fast. Being among a bunch of farmland and corn made me feel right at home (as I grew up in Zionsville, IN, just 1-2 hrs away). Jodie and I were quite evenly matched on the bike, again something I was pleased with as she’s one of the best out there on two wheels as well! I tried to break away and put a gap on her a few times, but it seemed each time I did she’d come back around me. That said, it felt good to push hard and feel so dang strong in the TT position; something that I have truly been striving to find for years. I taped over my SRM, but I felt like that high end power that I was worried about was there just fine. Every time I felt like I was letting up, I’d try to hit the gas again. It was fun knowing I could really go to the well without risking a blowup knowing that the bike was only 30 miles. Ah, another interesting part of the bike was this… I had a gel flask on my top tube (intended for the 56 mile distance) with 400 calories of Powergels. I downed the entire thing in the 1 hr 10 min on the bike! I think that my body was craving the sodium (that was also 800 mg Sodium), so I figured I’d just go with it. That gel flask along with water and I was good to go for the 10k run. 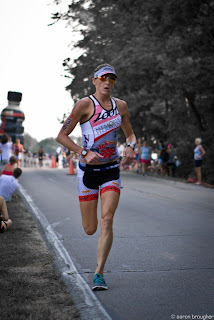 I took off out of transition and I tried to start off fairly hard. I knew that Jodie was close behind, but I also didn’t really know exactly how far back the other women were. I told myself that they were within a minute so it forced me into thinking that I had to go and go hard. About 1.5-2 miles in, the lead biker looked back and told me ‘noone in sight’ so I was able to take a breath and relax, just a bit. The run here in Muncie is not full on hard, but it is not a walk in the park either. It consists of a few rollers and not much wind, which makes it feel a bit more challenging than it may appear. It was a very nice treat to turn around after only 3 miles, and I was able to get a better view of what was going on behind me at that point. I had a good lead, however I always try to assume that people are hard charging and that I can’t let up; I have been caught at the line before and it sucks! I think it’s just a small mental trick that helps. Finally the last couple of hills approached and with a quick turn to the left, the finish was in sight! I was so happy to take the win here, as there is a bit of history with Muncie 70.3. It was my first half Ironman in 2004, so it’s an incredible feeling to, after 8 years, finally be able to win this one in my good old home state of Indiana. 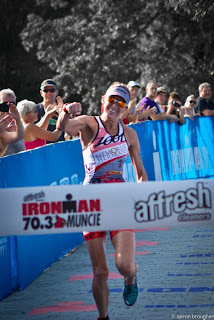 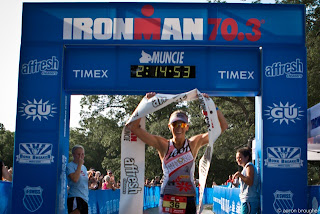 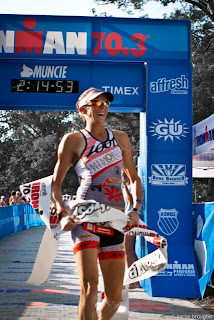 I have to give a huge thank you to my parents and family for being there to support; they were there in 2004 (even though my dad did mock me that year upon the bike exit saying “Kelly, where ya been?

It’s one thing to hit ‘hot streak’ and find a groove, win races, and feel (if even a little) invincible. It’s nice to say that after many years at this, I think that I’ve at times found this ‘groove’ the past few of years. That said, I think it’s invaluable to get knocked down at times as well. It forces us to re-evaluate, dig deeper and remember that on any given day, anything can happen. Past results don’t mean anything when we toe the line; it’s always about US making it HAPPEN on the DAY. This win is a little bit sweeter given that I felt like I overcame some questions and doubts the past few weeks. Next up is a few weeks in Salida, Colorado, our little training escape and then it’s a big few races: HyVee, Vegas 70.3 and Kona. It’s nice to take a little confidence into this training stint.
Thank you for your support & see you out there! 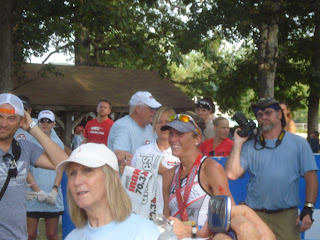 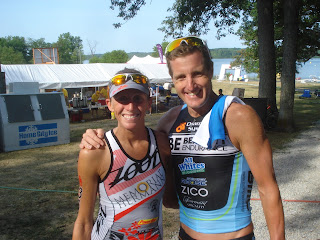 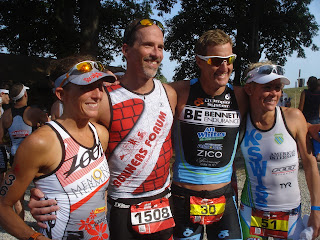 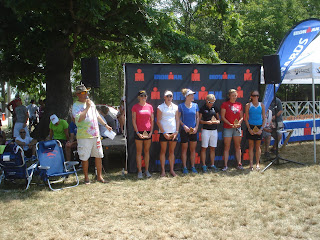 Love it! 🙂 Congrats on the win & being doing it in your home state! Glad that you got a chance to hang out with family too.
I learn so much from reading your race reports–I'm going to try putting gels into one flask for a long training ride. That might just mentally trick me into eating more on the bike!

Congratulations on the win! Wishing you a good recovery and great training in Colorado.