We are well into our annual Salida, CO “summer training/escape the Austin heat” trip. We’ve been here 4 weeks, and we have just less than 2 to go. As always we have had an awesome stay here; cooler temps, afternoon storms, and the daily river plays with our dog Amico. Derick and I are both mountain people by heart; we love Austin but we have to get away and see mountains at least once a year. I have yet to take to the Arkansas river and make it into my own swimming treadmill, but… there’s still time!

Yesterday I was out on my 11 mile uphill Tempo run which Derick so kindly assigned to me. The one thing that Salida lacks is a nice long fairly flat dirt path for running. Living in Austin, we forget how spoiled we are with a marked 10 mile dirt path around Lady Bird Lake. It makes it easy to do fast tempo runs, long runs and even recovery runs on a softer surface. Here, there is no shortage of hills but at 7000+ feet, they can get pretty taxing if you are always running up or down. And, given that I am doing Ironman training, at times I need to get the ‘miles’ in, not just the time. The first long tempo run I did here was out and back 291, a long fairly flat stretch of road. The next week, I took the 12 miles to a treadmill for a softer surface and less pounding. Then Derick discovered a long dirt road that goes uphill for (at least) 12 miles. He suggested that I do an ‘uphill tempo’ on this as an alternative. I agreed. I then said ‘so what pace do you think I can run it?’ and he said ‘…probably 7 min pace or faster.’ I thought to myself…huh. Really? That sounds fast. But I figured to give it a go and see what happened. 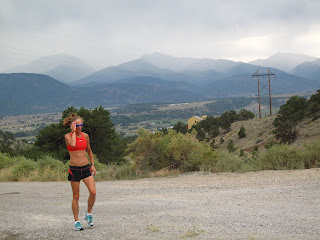 thinking ‘oh shit, what have I gotten into..’ 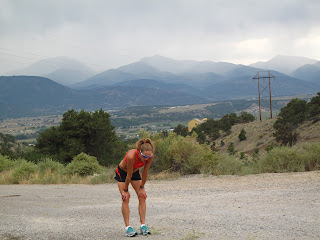 The run goes from our condo and takes 3 miles to the start of the dirt, but half of this is already going uphill on pavement. Then the dirt begins; the start line for 8 miles up. Derick marks every mile with flour (I guess this is a runner thing?) so, lucky me, I could see my run splits. When you’re told 7 min pace and you see 8:22 on mile 1, it can be a little demoralizing. (I of course yelled at Derick when he drove by me the first time something to the effect of “7 min pace my ass!”) But, I tried to suck it up and keep on running, knowing this was a strength workout, not necessarily speed. Mile 2 was more brutal as the road was both twisty and steep. 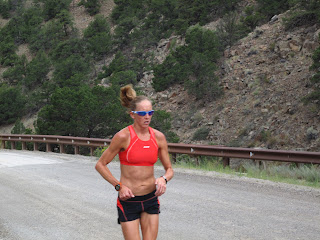 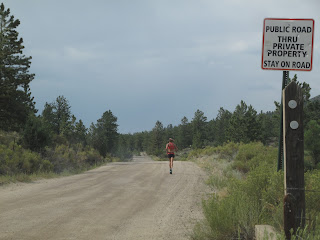 By about 2 miles in, I start to just zone out and take it as it comes. It’s long, and while the environment is beautiful, it is unrelenting and simply put, my hill does not end until the 8 miles are completed; no matter how fast or slow I split each mile, there are still 8 of them. The good thing was I had done this a week earlier, so I knew what to expect and I also had previous splits to base this run off of. Thankfully, these ones were slightly faster than the previous week. Derick would leapfrog me to mark off the miles, along with Amico in the car to spectate and ‘support’. Up, up, up I go. 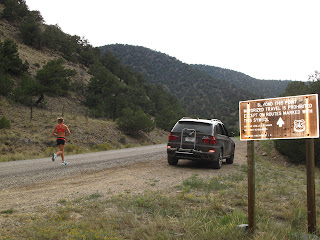 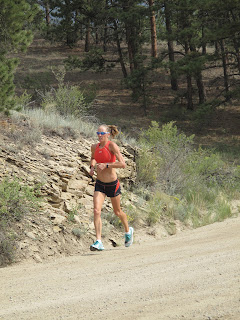 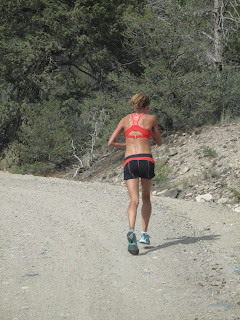 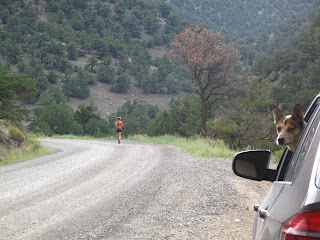 Soon enough, I hit the 4 mile mark which was a nice sight to see…halfway! I watched for Derick around this point because previously, he had pulled the car off to let the dog play in a fairly open spot and hand me some water. However as I approached Amico’s play field, the cows had decided to take it over for the day, so the poor little guy was left in the car to bark at the cows. Thankfully, they let me through the road; and looked at me like I was crazy. (smart cows!) 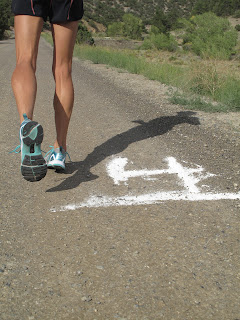 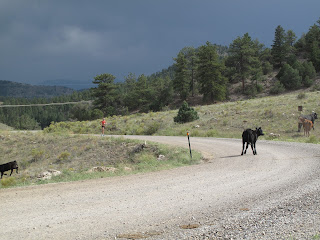 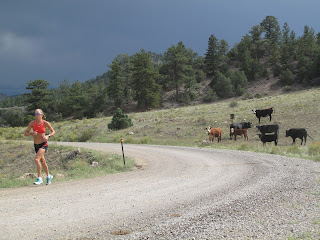 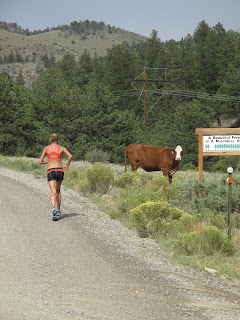 From this point on, it is kind of ‘all downhill’ (mentally) since I know I am down to 3+ miles to go. The air gets a little bit more thin, temps cool off a bit, but it’s still about trying to stick to the best pace I can sustain while …yes, still going up. By the time mile 6 rolls around, the terrain kicks up again and also gets a bit more rocky; which can be tough given the amount of fatigue which has accumulated by now. I’d start to see rocks up ahead of me, which appear white in the dirt, and I kept thinking they were lines of flour; but most times, they were just more rocks! I’d think “Damn, where is the flour!” I tried to not look at my watch except for the mile splits, because it kind of messes with your head if you fixate too much on the time; moreso, it’s just one line of flour at a time. 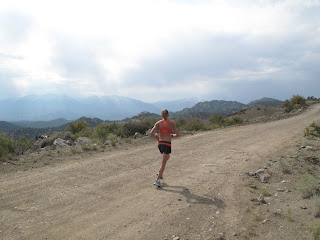 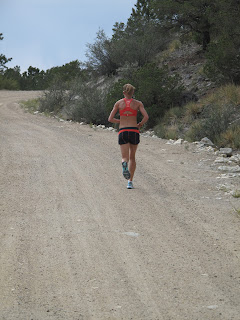 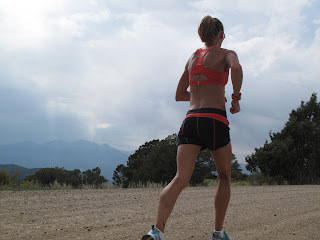 Even though the run ‘only’ tops out at about 9800 feet, it almost feels like I’m getting closer to the sky as I finish up the final couple of miles. And one of the best parts of this entire run is, the final 1/4 mile the terrain actually levels off and descends a bit. A nice way to finally find some leg turnover and finish it up strong! 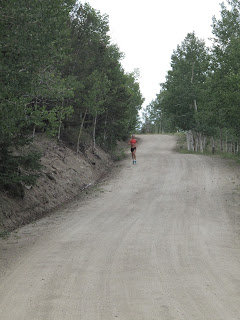 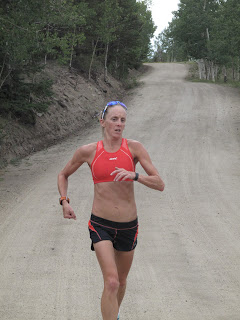 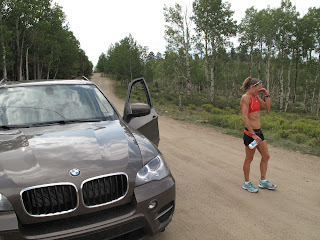 …aaand, done. The run culminates with the view from the top and a happy Kelly; thanks to my awesome sherpa husband and of course Amico in tow to keep Derick company. This dog loves few things more than car rides (except maybe playing in the river, biting waves). 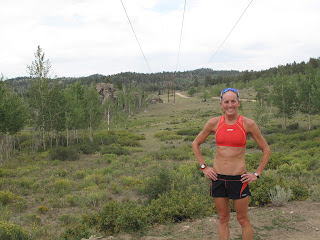 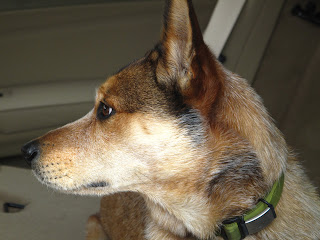 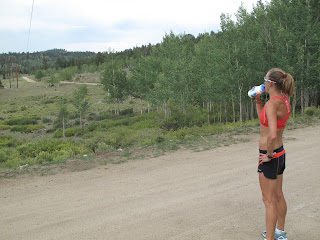 This run, to me, is kind of a symbolic microcosm of all of my time training here in Salida. Vastly all of what I do is on my own, solo, for 6 weeks. While most the time I relish in solo training (I feel good, I roll with it…I feel like shit, I dial it back; no added stresses of pacing off of/with someone else) I have to admit that I have had a few ups and downs. I may struggle one day to get myself out the door, but once I do, I realize why I do what I do and how much I truly love it. I’ve got an incredible playground here in Salida, and it’s just a matter of figuring out where I’ll do what on each day. Swimming is probably one of the harder things here; swimming at 7000 ft is extremely challenging, in an indoor 25-meter pool that is kept at a balmy 84F no less. There is no open water lake, or at least none actually ‘in’ Salida. However, like anything else… you make it work. I miss my masters group in Austin, I miss the long course meters pools…but I know that the altitude is making me stronger, and if I want to get it done, it’s up to noone but me. And I have to hand it to Derick. I would have never (ever) chosen to run uphill for 11 miles and call it a ‘tempo’ run. I am usually pretty tied to paces; tempo means fast, and I want to see fast splits. However, in this situation, tempo means strength and even though the turnover is not there, to mentally run up a hill that lasts for 1.5 hrs is brutal; not to mention the physical challenges it brings and that it can actually make you a ‘faster’ runner. It requires so much fortitude and persistence, regardless of that satisfaction of seeing ‘tempo pace’ on my watch at each mile. One foot in front of the other, relaxed upper body, consistent breathing, keeping the effort in check…and just clicking off each line of flour. Noone around to keep me honest, noone next to me to keep me moving forward; just me. If that won’t make you mentally stronger, I’m not sure what will! 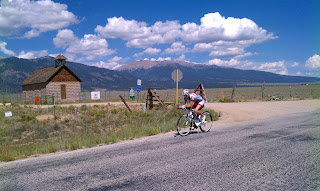 Here is a little glimpse of what tomorrow has in store…this is me riding back from Buena Vista, after climbing  up Cottonwood Pass; which tops out at 12,126 feet. When it gets tough and the legs are burning, I’ll just remind myself that there are no mountains like this in Austin! It’s not a bad way to spend a Saturday. Because this is the reward at the end; a natural ice bath & entertainment from Amico! 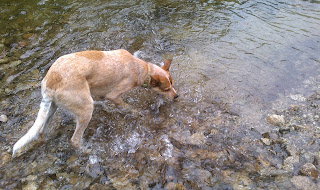 4 replies on “Visions of Flour: Running in Salida”

you are a rockstar…that looks painful and beautiful all at the same time! so jealous of those mountains and long rides in them, it looks like so much fun.
between this and your NV training you are going to be on fire- can't wait to cheer you on at the next race. enjoy the rest of your time with the mountains and out of the Austin heat!

Love to hear about your adventures, Kelly:) I'll be thinking of your inspsiring uphill “tempo run” tomorrow – I'm heading out for a solo 16 mile trail run here in Alaska…first 9 miles are uphill! I'm hoping for a 12 min pace, ha!

Love to hear about your adventures, Kelly:) I'll be thinking of your inspiring uphill “tempo run” tomorrow – I'm heading out for a solo 16 mile trail run here in Alaska…first 9 miles are uphill! I'm hoping for a 12 min pace, ha!

Found a camp to work at this summer in Villa Grove, CO about 30min south of Salida. So I was wondering if you did any runs near Villa Grove or know of any dirt trails in that area. Running collegiately so I’m just wondering if this is a good area to train in.