It’s no secret that I have had my eye on the final part of my season all year long. The overall plan was to start early, knock out the necessary points, and gain fitness from the first half of my season. We then shut it down in the heat of summer, head to Colorado and focus, undistracted, on training 2 months. I love to race, but this allowed me to shut off, put in some volume and also get that fire in my belly again to compete. The big racing push would include three Championship events: HyVee 5150, Vegas 70.3 and Kona. Call me greedy, but my goal is always to win! Maybe not all, but at least one! Thus far, however, I am pleased with the first two results, especially given an unexpected ‘glitch’ at HyVee. In short, I was 6th at HyVee. In long, here is how it unfolded.

I’ve been excited to do HyVee ever since I put it on my schedule late 2011. I train for 70.3 and Ironman, but I try to keep in touch with the shorter speed here and there. I trust in my ability to race well in both Olympic distance events and Ironman. I headed to HyVee after having been down from altitude for 1 week, and really doing mostly 70.3 and Ironman focused training in Colorado. I knew it would be fast and furious (especially on the swim) but I was anxious to throw myself into the mix and see how I measured up against some of the best in the world at this distance; fully knowing that it could go great or I could get it handed to me.

I liked the feeling of Des Moines from the moment we arrived. It felt like a mellow town, easy to navigate, low key, not too busy. I guess I’m just a small town Indiana girl at heart; but I always feel relaxed arriving in a town like this to compete. It was a treat to have Derick and my parents all there, and I felt fairly relaxed going into it, knowing this was not ‘the’ focus race for my year; moreso a good stepping stone for what was to come. 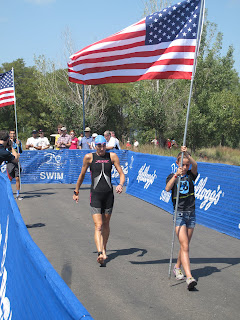 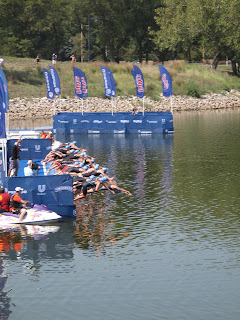 This race organization spares NOTHING. Top notch, first class everything; they go above and beyond to make you feel like they are truly glad you’re here in Des Moines for their event. Before the swim, all 30 women lined up with an ‘escort’ carrying our country’s flag. Incredible! We marched down to the pontoon for the dive start, and after fireworks went off, took our spots, and awaited the gun. Off we went for the 2-loop swim. I gave it all I had from the gun, but watch a few women drift off into the distance, trying to stay within myself. We exited after 750 meters, ran down the pontoon and dove in for the second loop. That heart rate jolt was a bit of of a shock! I felt a bit better as I settled into the second half, but found myself counting my strokes at the end. My mind was definitely drifting! I’m a very steady swimmer and I knew I was going as fast as I could. Upon exiting, I got to try out my new Zoot speedsuit, which unzips by simply tearing it apart; worked like a charm and no cord to deal with! Smooth as butter. I was about 1 minute down from the leaders; not ideal, but I didn’t let it rattle me. 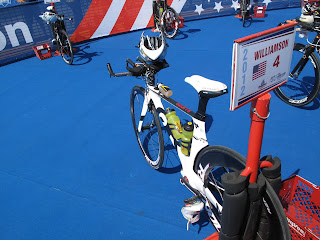 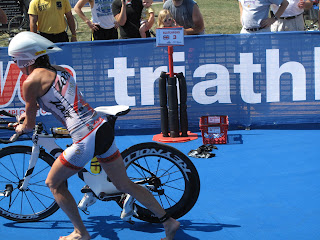 I hopped onto my QR Illicito, threw on my new Giro Selector helmet (which I’m a huge fan of) and tried to bike like hell. We had a 4 loop course and it was a lot hillier than I had expected. I knew it would be technical with many turns, but it was also a lot of shifting and a LOT of punching high end power. I felt strong but definitely a bit out of my element; that intensity is so different than what my bike focus has been. I managed to hold my position more or less throughout the bike, passed a couple of girls, got passed by a few. I actually lost a few (4) spokes halfway into the bike when a competitor made a pass so close to my right that something on her bike (perhaps the skewer) ran up against my front wheel. I heard the noises, and when I looked down I could see something was off with the spokes. My Reynolds 46 front wheel seemed to still ride fairly true, but upon standing I could see it wobbling. For one thing, it pissed me off, which is never a bad thing…I tend to do well in this state. J But it also made me nervous with the technical course that the wheel could be a bit unstable. I was so thankful to finally finish up the bike knowing I had finished it in one piece. It was truly impressive that my Reynolds 46 wheel held up and still carried on safely with 4 broken spokes! 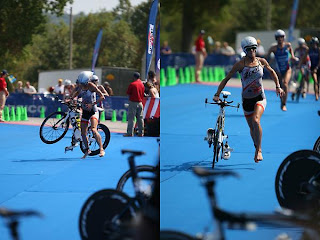 When I made the final turn to dismount, the line jumped up on me, a bad mistake I had made (completely my own fault) in that I didn’t realize the dismount line was THAT quick after the final turn. They had firmly emphasized being completely OFF your bike by that line with the huge primes. The good thing was I had a stellar dismount! The bad thing was I landed so hard on my left heel that after throwing on my Zoot Ultra Race shoes, running out of T2 I had an indescribable pain in my foot and up my entire lower leg. I literally hobbled, then stopped and shook my foot out. I decided if I could continue to run ‘normally’, I would carry on. If not then I would have to quit, knowing what races I had to come. These moments can be so tough as an athlete; do you pull out to be ‘safe’ or do you grit your teeth and suck it up? I began to run and it seemed the pain went away, so while I knew something was not entirely right in there, I decided ‘game on’ and began to put together the best 10k I had in me. I managed to go from 14th to 6th over the course of the 4 loop, 10 km course. Quite a good result given where I had started. The bad part was I could barely walk after I finished. I definitely wanted to be in the Top 5, but I my concern over my foot overshadowed that and I was pleased with the result. I enjoyed the evening with my family but a fun dinner out became pizza and beer in the room, along with icing and elevating my foot. 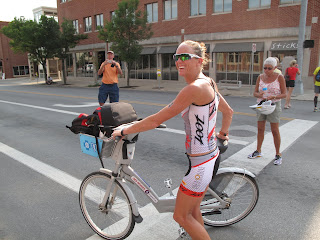 It made for an incredibly stressful next few days. Derick got me crutches at Walmart that I used the next day to get home, simply because any weight on my left foot was horribly painful. Nothing like leaving a race on crutches! I had an MRI on Tuesday which showed thankfully no damage to the bone or the plantar fascia, only inflammation and fluid in the heel. At this point, I had to make the decision about Vegas. I told myself it there was no real damage to my foot, I would still race. I pushed my departure back to Friday, as I needed all the time I could get in Austin getting acupuncture, massage, and seeing another doctor for a second opinion. Thursday before Vegas, I was still nervous and stressed out about even heading to the race. I was assured (as much as a doc can ‘assure’ anything) that he really felt like with ice, anti-inflammatories, and rest until Sunday, no further damage would be done. SO…I decided to head to Vegas despite a bit of skepticism, and hope that it came around by Sunday.

It was not the week I had anticipated going into what was one of my biggest focus’ of the year, but having been in this sport for so long, I’ve come to realize this is part of it. I could have been worse off, and I had to mentally realize that the lack of running all week had not hurt me in anyway; if anything, the forced rest had probably been good. I had a few doubts but as the weekend approached, I tried to push them out of my mind, knowing I had the fitness and I simply had to try to ignore any potential foot pain on Sunday. Yet again, a lesson in ‘shit happens, it’s how you deal with it’! If you’ve not had things like this happen, you haven’t been in the sport long enough, because they will. I knew it was up to me how I chose to deal with this; take myself out of the race from the start, or forget about it and go in with a focus as if it had never happened. I tried my best to do the latter.

I cannot thank enough the ‘army’ who helped me out during this tough week. My husband Derick (and of course my mom!) who were just there for me in the ups and downs; Kim Mullen, a chiropractor and friend who initially assessed me; Kendal Jacobson my massage therapist; Jack Murray of Jack & Adams reached out to get me in touch with a podiatrist; AJ Zelinski of Advanced Rehab; Karen Smith who paid me a home visit to do acupuncture; Aaron Brougher and Reynolds who came through with a new front wheel; James Balentine at Jack & Adams to get the wheel glued up. The community we have found in Austin is truly unparalleled. Additionally thanks to my sponsors for their constant support. It was time to stop feeling sorry for myself, put on my game face and get after it; despite any doubts I may have had, I was stoked at the opportunity to toe the line in Vegas and give it my all. 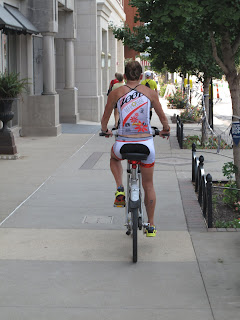 I got to watch the Hy-Vee race onloine- loved getting to “see” you race, and cheer for you. Unfortunately, I missed watching world champs and had to find out the results after my race. I'm so glad that you got the foot figured out for Vegas—congrats on both races! I really love that you race all distances…and kick butt in them all! I can't even wait to cheer you on for Kona 🙂 happy kona training! 🙂