Given some time to reflect on the 70.3 World Champs, I can’t help but feel like I’m a bit like a turtle. Maybe this is because I spent a bit of time at the Westin Lake Las Vegas’ outside patio, looking out over the water, admiring the giant turtle fountains spitting out water; cute little guys. While I’ve managed to put together a string of good results the past few seasons, the progression to this point in my career has been extremely steady and consistent. At times frustratingly slow and steady, but, in retrospect, I’d prefer to have had it no other way. It has allowed me to be that much more appreciative to see it all come together as it has. 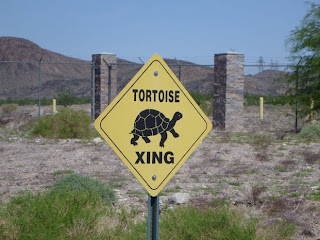 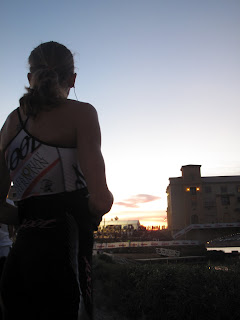 Sunday’s race was an interesting one. Given the week leading up, I tried not to change any of my goals or expectations; but truth be told, that is really tough when your ‘master plan’ gets the least bit rattled. It just challenges your mental capacity and attitude that much more. I had been out to the Westin Lake Las Vegas in June for a solo mini training camp/bike focus, and I loved the venue. Calm lake swim, hilly and challenging bike course with wide sweeping turns, and a hard hill run; and hot temperatures. There were few things that, if I could hand-pick a course, I would opt to do differently. To top it off, I had the support of my husband Derick, my parents, and my Aunt Sandy and Uncle Del all in attendance. Some of you may know that I’m raising money for Multiple Sclerosis, as it is something very close to me. My Aunt has had MS for 40 years now, and to have her there to watch my race made it all the more special. I just hoped I could put on a good show! 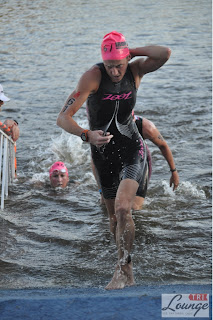 We kicked off right at 6:30, a few minutes behind the pro men. I felt strong from the gun, and managed to separate myself from the mass of women within a few minutes. I could see one woman up ahead and I guessed it to be Jodie Swallow. I could feel a couple people tapping my feet throughout but thankfully they were all nice! It forced me to keep my foot on the gas; when I felt them tap, I’d try to pick it up a bit. It ended up being Leanda Cave and Meredith Kessler; who, like me, aren’t into dogfight swims (to me it’s just wasted energy). I exited about 30-45 seconds behind Jodie with Leanda and Meredith right along with me.We were onto our bikes after a nice long climb out of T1 and Leanda was right ahead of me. I figured that since last weekend at HyVee we had ridden together most the way, well, we would do that again. Ha! Not if she had anything to do with it! She soon drifted off ahead as we entered Lake Mead Rec Area, and the carrot was gone. I stuck to my plan, tried to stay strong and steady; work the climbs but also get small and fast for the huge descents. I was feeling fairly good, but I was also getting passed here and there. I just tried to stay positive, even though at the turnaround (~mile 24), I could see that the top women had put in a good gap. I thought back to the many long rides I had done out here (back to back 100 mile days) in June and reminded myself that this was only 30 more miles; compared to my training, compared to all the intervals, this was nothing. Foot on the gas, eyes down the road. 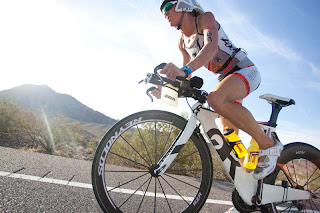 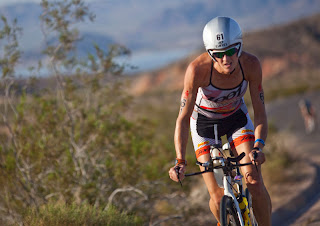 I entered T2 with far more of a gap than I would have preferred (about 7-8 minutes) so I knew I had serious work cut out for me on the run. I bombed out of transition while balancing changing my hair (low ponytail to high, my usual, so my visor fits better) and carrying my flask of 4 PowerGels, and it was time to get after it. It was a 3 loop run that is basically either downhill or uphill. I managed to move through the field the first loop, probably moving from 7th into 4th or so. I was feeling incredibly strong out there. Well into the second loop, about mile 8, I managed to pass two women which moved me into 2nd place. I was still feeling great, but at about mile 10 as I started the final long climb, my body started to really feel the effort. I knew my deficit to Leanda was decreasing (I was literally hearing ‘6 min down! 4:30 down! 3:45 down!) but I also knew that I was running as fast as my legs would let me. By the time I reached mile 12, I was told “1:45 down!” I knew that unless Leanda blew up (and she was running downhill, mind you… an unlikely scenario) that I would have to settle for 2nd place. Nonetheless, when I made the final turn downhill for the finish, I gave it all I had in me. I managed to cut the difference to 1 min 19 seconds, and while I wanted nothing more than to be the 70.3 World Champ, I was pretty satisfied to have run myself into 2nd place. 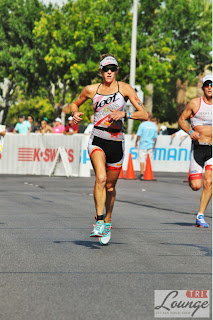 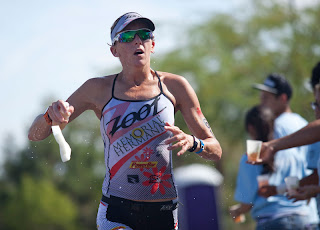 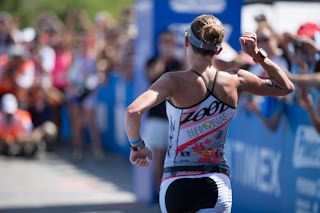 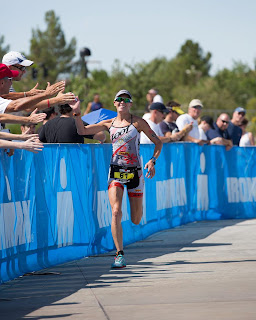 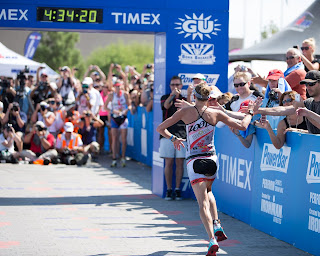 When I came here to train in June, I ran the run course a few times to know what to expect. I am not a huge fan of ‘visualization’, but I would picture myself out there, racing, and I would envision myself with a victory here, on race day, at this venue. It didn’t feel forced; it felt natural; it was something I believed I would do. It’s tough to actually believe and picture yourself as a World Champion. Many of us can ‘say’ we believe we can do it, but to truly buy into it with every ounce of yourself is something totally different; you can’t force that. I truly believed that on this course, in this venue, at this distance, I was 100% capable of winning the World Championships. It didn’t happen on the day, but for some reason, I haven’t walked away disappointed. Every race is its own beast. I dealt with some things going into this one that I’d not expected. While I don’t know if the week leading up to it affected my race, what I do know is that I executed that race, start to finish, to the best of my abilities. I felt good, I had no major mishaps, and I never ever gave up on myself; even when I knew I had 8 minutes to make up. I can honestly say, I don’t know if I had an extra 1 min 19 seconds in my race that day; there is nothing I think I could have done better. When you walk away like that, with no regrets, it’s tough to be anything but satisfied. 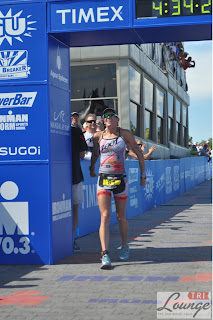 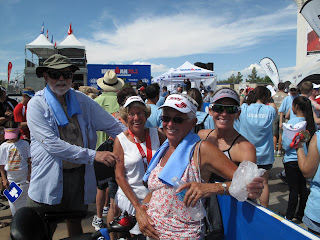 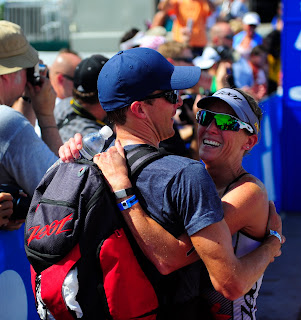 It has almost been a dream season for me (…it isn’t over yet!). I set out with big goals and with competitive races on my schedule, dating all the way back to February with Panama 70.3. Some people look at my schedule and think it’s ‘too much’, but I plan what I know I can handle and after 10 years of racing as a professional, I know myself pretty well. I like to race good competition as much as I can, but I also try to respect my body and give it the R&R that I know it needs. To me, this ‘Triple Crown’ thing really isn’t that big of a deal… I hadn’t raced in 8 weeks when HyVee approached, so I was fully ready to get back at it! I think that we can gain so much fitness from racing, given that we recover and rest afterwards. So that’s what I am now doing… trying to give my body the rest it needs so that I can be ready for the big one, Kona, in just 4+ weeks. It’s all the easier to get that ‘rest’ when you have blips like a slightly bum heel or a cold that hits after a race (both of which I’ve had)! In any case, while I have raced a lot of shorter races this season, I am very excited at what is around the corner. Ironman still holds a lot of unknowns for me personally. I’ve never really performed like I think I am capable of at this distance. So it’ll be fun to challenge myself on the most tried and true proving ground there is in our sport. But for now, I will enjoy the feeling of the 2nd place at 70.3 World Champs to cap off what has been a great year thus far.

I have to give a huge thank you to those who have been instrumental in my success’ this season: Derick, my husband and coach; he supports me when I need it but also knows how to get me to do things I don’t think are possible. My parents who are probably shocked their 34-year old daughter is ‘still an athlete’, just as she was 20 years ago, but are never anything but supportive. My Aunt and Uncle for coming out to Vegas to cheer me on.

I’ve had a few people call me ‘inspiring’. I don’t know if we ever really consider ourselves worthy of such a compliment; inspiring is when people overcome the impossible, they have every odd stacked against them and they somehow succeed; I don’t feel like I have had to leap too many hurdles in my life. But when I step back and take a look at my own career and progression through the sport, in my opinion I have just stubbornly clawed my way up the ladder. There have been times I’ve wanted to throw the towel in, thinking there’s no way that my cycling would ever make me competitive with the best. But just as often I’ve said to myself, “Why the hell not? With persistence, hard work and visible progression, there’s no reason you can’t get to that level.” Pardon the cliché nature of this statement, but if my success’ can inspire just one person to believe in themselves a bit more, or decide that there is nothing to lose by chasing a dream or a goal, then every success I achieve becomes multiple times more meaningful. With that said, aim high, my friends. There’s a lot to be gained, especially if you’re not afraid to fail.

K! The QR bike looks like and old-school Softride Powerwing tweaked to a double-diamond shape… BTW, that Softride was one of the most aero, power-efficient rides out there in its day…so, the QR is carrying on great form (and based on the rider’s results, you make a great team with it!)!